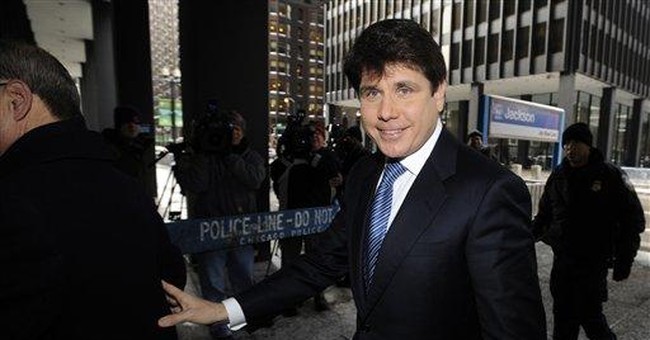 "We're looking to fundamentally change the status quo in Washington. It's a status quo that extends beyond any particular party, and right now that status quo is fighting back with everything it's got, with the same old tactics that divide and distract us from solving the problems people face," said then-candidate Barack Obama on Jan. 26, 2008. "We're up against the idea that it's acceptable to say anything and do anything to win an election."

In December 2008, just 10 months later, then-Gov. Rod Blagojevich, D-Ill., burst onto the national scene when he was arrested for corruption. One of the charges he faced was attempting to peddle President-elect Barack Obama's U.S. Senate seat to the highest bidder.

Like millions of other Americans, I watched the soap opera story unfold on cable and network television. The potential connections to Obama and Blagojevich's inability to guard his speech provided ample opportunity for speculation.

While the Blagojevich saga continued in Illinois, President-elect Barack Obama and his team transitioned smoothly into Washington, D.C.

There were still connections. It was Obama's open Senate seat that was allegedly up for sale. Valerie Jarrett, now a senior White House adviser, was a potential contender for this same seat. Rahm Emanuel, now White House chief of staff, succeeded Blagojevich as Illinois 5th District congressman in 2003.

However, the taint of corruption has managed to stay in Chicago, a city known for machine politics, rather than move into Washington, D.C.

Until last week, that is. The juxtaposition is surreal.

Last Friday, after months of silence regarding a potential White House job offer for Rep. Joe Sestak, D-Pa., if he did not run in the Pennsylvania Senate primary against Sen. Arlen Specter, D-Pa., White House Counsel Robert F. Bauer released a memo addressing the events.

The short version: We did nothing wrong, we asked the former president to help, and the job offered would have been unpaid.

The underlying message, "Trust us, we are transparent."

While the White House has attempted to exonerate itself in the Sestak incident, Blagojevich remains mired in scandal. Jury selection begins today for his corruption trail.

Blagojevich has predicted that he will be acquitted if the jury has the opportunity to hear the entirety of his conversations taped via federal wiretap.

Can you imagine 500 hours of political talk?

The 24-count indictment against Blagojevich includes charges of wire fraud, racketeering and attempted extortion. The prosecution will attempt to portray Blagojevich as having used his position of power to enrich himself. Prosecutor U.S. Attorney Patrick Fitzgerald said, "The most cynical behavior in all of this, the most appalling, is the fact that Gov. Blagojevich tried to sell the appointment to the Senate seat vacated by President-elect Obama."

The defense has subpoenaed a number of politicians, including Sen. Richard Durbin, D-Ill., Sen. Harry Reid, D-Nev., and Rep. Jesse Jackson Jr., D-Ill. The defense team of Sam Adam and Sam Adam Jr. has stated they will argue that Blagojevich's actions were not for personal gain, but instead represented run-of-the-mill political horse-trading.

Run-of-the-mill political horse-trading. This phrase is reminiscent of the last lines of Bauer's memo noting that prior administrations have also "discussed alternative paths to service for qualified individuals also considering campaigns for public service."

Instead of changing the status quo and providing transparency as then-candidate Obama promised, this claim makes them appear opaque.

Too bad there's no federal investigation of the Clinton offer. Who knows? Maybe there's 500 hours of tape somewhere parsing just what he means by "job offer."

Maybe the Obama administration's motto should be, "Trust us, we are opaque."