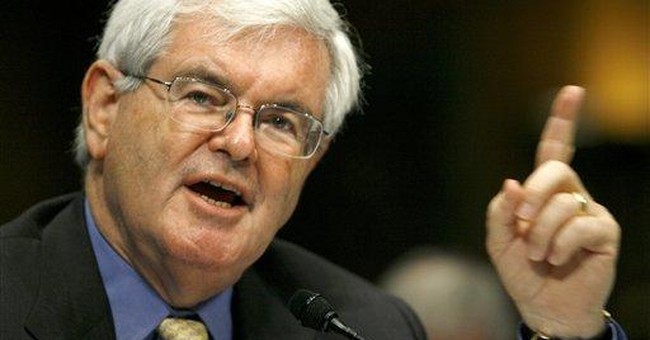 Richard Cohen may state his opinion, but he should not fabricate facts.

In his column, "Newt Gingrich, provocateur in chief," Cohen falsely claims that Newt Gingrich (my father) has never worked for a profit-making organization. Cohen might as well state that Dad has no gray in his hair.

The phrase "Oy, such narishkeit" are the words a good friend of mine, a rabbi, had for Cohen's column. "Oh, such foolishness," is the translation.

Combined, his companies employ more than 30 people who are earning money to take home to help support their families. Every day, he is faced with the same challenges every small-business owner faces: acquiring and retaining customers, meeting payroll, investing in the business, filing government paperwork and paying taxes.

Furthermore, while Cohen is correct that Dad has never served in the military, as the son of a career Army officer, Dad has translated his love for the United States military into serving the military. As a boy, he and his family moved four times during seven years. They lived in Fort Riley, Kansas; Orleans, France; Stuttgart, Germany, and Fort Benning, Ga.

Dad is the longest-serving teacher of the Joint Flag Officer Warfighting Course at the Air University. He has taught 44 courses there during the past 23 years. He also teaches officers from all five services as a distinguished visiting scholar and professor at the National Defense University, and has been doing so since it started in 1983.

Since leaving the speakership, he has given hundreds of unpaid hours to the Pentagon to work on various initiatives to meet 21st century threats, including his membership on The U.S. Commission on National Security/21st Century, (better known as the Hart-Rudman Commission).

In addition to giving his time to the military, Dad and his wife Callista have donated to a number of charitable organizations, including Luther College, the Basilica of the National Shrine of the Immaculate Conception, the Washington National Opera, the Wolf Trap Foundation, the City of Fairfax Band, the Atlanta Ballet, the Mount Vernon Ladies Association, the Museum of the Rockies, the American Museum of Natural History, the Arthritis Foundation, the Alzheimer's Association, the Learning Makes a Difference Foundation and the Trust for Public Land.

While serving as a congressman from Georgia, he helped the Atlanta Zoo acquire an Emerald Tree Boa, a Komodo Dragon and a black rhinoceros. Last month, my two children -- his grandchildren -- visited the zoo and saw the animals.

Dad volunteers his time, energy and money to make our nation better, all while he has started three companies and created new jobs. Maybe he should be called citizen activist in chief.

As one might guess based on the above activities, he often puts in 12- to 14-hour workdays. Dad and I have been planning to arrange for my children to tag along with him this summer for a few days so they can get a taste of hard work and long hours.

Cohen might ask to tag along, too, to see if he can keep up.

Last year, my father and I co-wrote "5 Principles for a Successful Life: From Our Family to Yours" (Crown Forum, 2009). This book started as a way to explain to my children that he did not wake up one day as former speaker of the House, appearing on the FOX network and making speeches (what they have seen of their grandfather). Instead, he worked his way up, and lives his life the best he can by following five principles: dream big, work hard, learn every day, enjoy life and be true to yourself.

I have posted a copy of our book to Cohen -- I hope he enjoys the uplifting message.

Cohen is close to target with the title of his column. With the addition of one word, it would ring true: "Newt Gingrich, thought provocateur in chief." When you combine Dad's charm, intellect and love of words, you can see that he can rouse strong feelings and lead people into action.