Pay as You Go -- Not Really 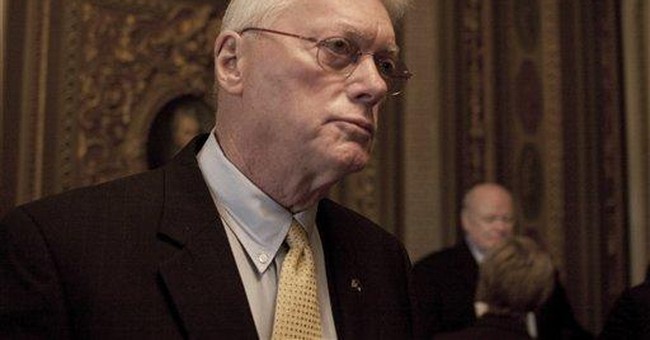 "It says to Congress, you have to pay as you go," President Barack Obama said on Feb. 13, the day after he signed the "pay-as-you-go" law. "You can't spend a dollar unless you cut a dollar elsewhere. ... We have to cut where we can, to afford what we need," he stated.

What a difference a month makes.

Pay as you go? Not really.

This week, Sen. Jim Bunning, R-Ky., who had thought Obama and Democratic House and Senate were serious about pay-as-you-go, has been vilified by the press, the Democratic Party and some of his colleagues in the Republican Party. Why? Because Bunning wanted to figure out how to pay for extended benefits instead of borrowing to provide them.

Go figure -- he thought they really were supposed to pay as they went. Sounds reasonable. That's what everyone else in our country has to do: figure out where the money is coming from before spending it.

But in this case, the Democrats wanted to go first and pay later. Their argument: that the measure was emergency legislation and therefore not subject to pay-go.

An emergency is defined by Merriam-Webster Online as "an unforeseen combination of circumstances or the resulting state that calls for immediate action." A program that expires as planned, that's not an emergency, that's bad planning and management -- and the Democratic Party is in charge.

Why was Bunning the only senator standing up and demanding that the Senate abide by the intent of paying as they go rule? Maybe it was because Bunning, after two terms in office, is not seeking re-election.

After five days of trying to get the Senate to pay as they go, Bunning finally agreed late Tuesday night to give up the floor of the Senate and proceed with a vote, if first the Senate voted on his amendment. Bunning's amendment proposed paying for the extension of benefits by ending a tax loophole for paper companies for a wood product, "black liquor."

But Bunning's amendment never reached an up-or-down vote. Instead, it was defeated when a motion to waive a budget point of order against the amendment failed on a vote of 43 to 53. Joining the Republicans in their failed effort were three Democratic senators: Russ Feingold of Wisconsin, Blanche Lincoln of Arkansas and Ben Nelson of Nebraska. Lincoln is the only one of the three who is up for re-election this year.

The go-but-no-pay benefits bill passed 78 to 19. Republicans cast all 19 nays.

Not only determined to win, but also determined to say why he won, Majority Leader Harry Reid of Nevada stated, "It came about because Republicans realized they were wrong."

No, Mr. Reid, it came about because the Democratic Party won the media war by painting the desire to pay before going as hard-hearted and mean-spirited, rather than thoughtful and principled. Many in the news media ignored the point that Bunning was for the benefits, but simply wanted to pay for them before approving them.

Last night, as my 8-year old son was getting ready for bed, he asked me to define "dictator."

"Someone who rules however they want," was my reply. "What happens in our country if our leaders do whatever they want?" I asked him.

"They get voted out of office, and someone else gets their job," was his reply.

If only those in office in Washington understood the basics of this process.

Voters will figure out that politicians need to deliver more than great media stories and sound bites, but also sound policy built on solid principles that are followed day in and day out -- not just when it is convenient and easy.

Ironically, Obama hosted a reception Wednesday evening at the White House thanking members of Congress for passing the pay-as-you-go bill last month. Yes, based on our current deficit, we borrowed money for that, too.

Of course, come this fall during election time, some of our government officials might find their jobs are threatened because they didn't learn how to play by the rules that the rest of us live by every day.