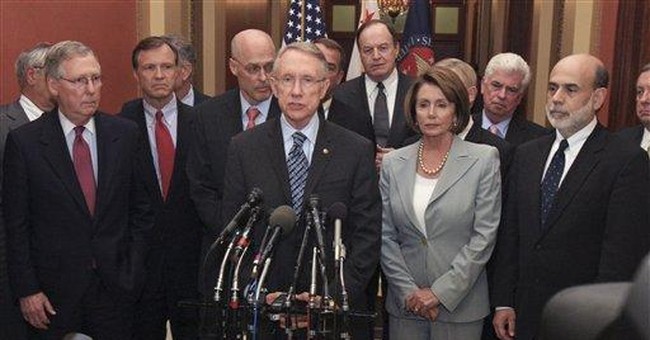 I woke up this past Saturday morning a bit exhausted and worn out. No, It wasn’t due to a happy hour that ran too long. I was waking up after 36 hours of nausea and a phenergan (used to treat nausea)-induced sleep.

The beginning of this incident occurred during the parents’ party my husband and I had hosted at our home on Thursday evening. Just before excusing myself, I was engrossed in a discussion with several other parents about the week’s nausea-inducing whipsaws of the financial markets. The most recent headlines had included the following titles: “Stocks Slump as Investors Run to Safety,” “As Fears Grow, Wall St. Titans See Shares Fall,” “Anxiety Rises as the era of easy credit comes to an abrupt end” and “Wall Street Unraveling.” The general feeling was one of disbelief and anxiety.

This morning, after clearing my mind, I saw the latest headlines: “Where things stand in big bailout” and “Stocks surge as Fed acts.” Clearly, things had changed during my long 36 hour sleep or at least they had for the stock market.

Real GDP grew at an annual rate of .9 percent and 3.3 percent in the first and second quarters of 2008 respectively. According to the U.S. Department of Commerce, real GDP grew from 2004 to 2007 at an average annual rate of 2.6 percent.

GDP includes actual goods and services. What drives the economy, the American people, their ingenuity and their work ethic. The GDP of a nation depends on its workers, their ability to create something of value and to find someone willing to pay for that particular product or service. Of course, the ability to access capital makes it easier for the entrepreneur to work on an idea to make something new, (also allowing those with bad ideas to give it a try too), but in the end it’s the new products or services that produced and sold that drives GDP.

We live in a world where an ever-growing amount of information is distributed every minute of the day, so much that the overload can become overwhelming. The minute–by-minute watch of the financial markets’ performance drives anxiety but not production. Instead of March Madness we have September Shambles.

While we might be in the midst of turbulence and uncertainty in the financial markets, panic does not help, it simply freezes one’s ability to act and think. What we need now is to take stock of where we are, review the assets we have and move forward with optimism.

Instead of looking to blame others, we should look forward to what is to come. Franklin Delano Roosevelt, the 32nd president who led the country during World War II and is considered by many to be one of the greatest presidents in our nation’s history, said this during his fourth and final inauguration:

“I remember that my old schoolmaster, Dr. Peabody, said, in days that seemed to us then to be secure and untroubled, ‘Things in life will not always run smoothly. Sometimes we will be rising towards the heights – then all will seem to reverse itself and start downward. The great fact to remember is that the trend of civilization itself is forever upward; that a line drawn through the middle of the peaks and the valleys of the centuries has an upward trend.’”

This belief that, over time, one’s quality of life would trend upward provided Roosevelt with a constant and persistent optimism that served as a refuge during hard times. We too need to share this belief and focus on optimism. Our challenge is not to dwell on the bad time, but to focus on the good.

Franklin Delano Roosevelt wrote at Warm Springs, Georgia, in 1945, shortly before his death, “The only limit to our realization of tomorrow will be our doubts of today. Let us move forward with strong and active faith.”

This past week is a reminder that snapshots are just that, any of last week’s days could have indicated demise or euphoria. Instead of looking at static points we should focus on progress over time. Strong and active faith leads to optimism, and the ability to endure, persevere and to wake up each and every day ready try again.

At least that’s how I feel today, but then I’ve been asleep for 36 hours.