The Party Of Man-Haters

Ilana Mercer
|
Posted: Oct 19, 2018 8:16 AM
Share   Tweet
The opinions expressed by columnists are their own and do not necessarily represent the views of Townhall.com. 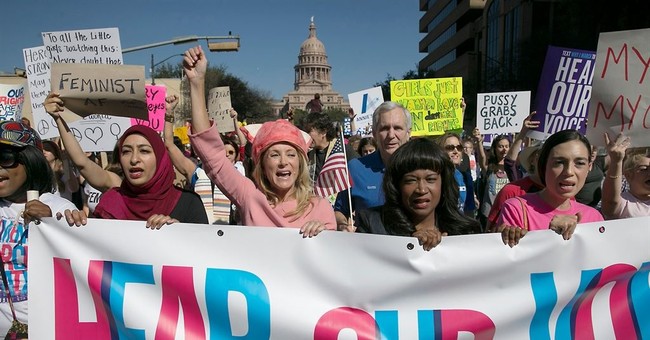 Throughout Brett Kavanaugh’s ordeal, Democratic women and their house-trained houseboys had attempted to derail the decent part of the process, rendering a U.S. Senate Supreme Court confirmation hearing a small-minded, mean-spirited, undignified and gossipy affair.

In tenor, the Kavanaugh confirmation hearing resembled a tabloid, a woman’s magazine, or the female-dominated, Trump-watch panels, assembled daily by the Fake News networks.

As to the women folk in the Gallery: They were plain gaga. These libertine “ladies” appeared constitutionally incapable of abiding by standards of decency and decorum, as demanded in such a solemn setting.

Thank our lucky stars we must that Democratic distaff are not yet disrobing, as do their Russian heroines:

This kind of abandon, albeit moderated, extended to liberal lady senators. Sen. Kamala Harris and her soul sisters in the US Senate conducted themselves like kids who can’t quit interrupting the grownups, nagging for license to break protocol, so as to harangue and harass the “bad” man in the chair.

On the day the Democrats lost—and Kavanaugh won his seat on the High Court—a primal, collective, atavistic howl rose from the Senate Gallery’s female quorum.

In response, a journalist in attendance quipped that this is “what the Left sounds like.” He ought to have stated the obvious. Sure, there are a few men among these girls gone wild. But this is predominantly what women of the left sound like.

Half-truths tend to bleed into wholesale lies if uncorrected. So, let us be frank. The sounds emanating from the uterine core of the Democratic Party are the subhuman grunts and growls one hears from animals in estrus or mid-feed. Something is terribly wrong with them.

This sound of willful insanity has spread throughout the land. It has signaled to the hordes Democrats across the country to holler at the moon. Or, harass and hit other Americans.

This is the same quorum that donned genitalia-shaped dunce-caps and took to the streets in a tantrum over Donald Trump’s election. On January 21, 2017, a day after his inauguration, millions of them marched in the Women’s March.

Lest anyone forget, this is the same XX-rated cohort whose “leader,” the actress Ashley Judd, rapped lewdly about her menstrual fluids at an anti-Trump rally. Cheering her were libertine grannies in pussy dunce-caps. Women of a certain age used to command respect. Now, look at them.

“Half the Democrats’ first-time House candidates this year are women, up from 27 percent in 2016 (and far higher than the Republican share of less than 20 percent),” the article continues. “From a field that includes Senators Elizabeth Warren, Kamala Harris, Kirsten Gillibrand and Amy Klobuchar, the Democratic presidential ticket in 2020 will probably include at least one female candidate.”

As has The Hill forewarned that “women are poised to take charge in a Democratic majority. … Female lawmakers [will be] in the driver’s seat for some of the most pressing issues facing Congress.”

Beware! Dem witches are preparing to mount their brooms and swoop down on Deplorable America.

This is what the dominant wing of the Democratic Party sounds and looks like. You can’t fix ugly. The issue with these ultra-left females is how uncouth, shameless, vulgar, and cruel they are.

The Democratic Party has come to be controlled by hysterical women and their domesticated man servants.

The anti-Trump protest ongoing is not cerebral or visceral, it’s gynocentric. And it’s expressly anti-male.

Yet, how did Republicans respond when these Democrats retreated from the Kavanaugh fight?

Most quipped, genteelly, that Democrats had overplayed their hand: The American People were hip to their antics.

Less-passive Republicans labelled the Democrats the party of mob rule.

Is that all you’ve have got? Hardly fighting words.

For heaven’s sake, Democrats have handed Republicans a winning issue. A huge winning issue. It is that that the Democratic Party, high and low, is dominated by militant, man-hating women. And they’re on the war path. In the words of Hawaii’s Sen. Mazie Hirono: “I just want to say to the men in this country: just shut up … for a change.”

Republicans can’t just mutter in a muted manner about “mob rule,” and ignore the rival party’s gift to them!

True, Democrats demonstrate daily that they’re not for the rule of law, but for the LAW OF RULE, mob rule.

The Man-hating Party is now on display as a party whose very ideas pose a danger to 49.2 percent of Americans.

Republicans should use it, or prepare to lose it.