Ilana Mercer
|
Posted: Nov 29, 2016 6:32 AM
Share   Tweet
The opinions expressed by columnists are their own and do not necessarily represent the views of Townhall.com. 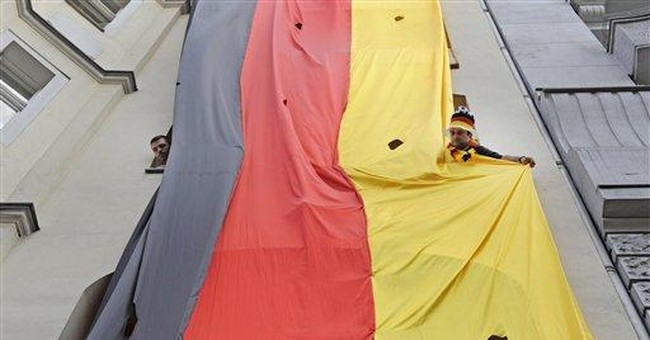 Junge Freiheit is Germany’s finest weekly newspaper. It’s easily its only authentically rightist, freedom-loving, classically liberal publication. When Junge Freiheit’s editors come calling; this writer is always happy to oblige—and not only because my weekly column once appeared in JF. But also because, present company excepted, the young editors at JF are simply the kindest, most professional journalists I’ve encountered. What was it that Oscar Wilde said about kindness? "She thought that because he was stupid he would be kindly, when of course, kindliness requires imagination and intellect." Having just emerged from a 15-year-long, abusive, professional relationship; kindness and courtesy are indeed new and lovely things to behold.

However, my Teutonic editor lit a fire under me. I was asked to make haste in answering Junge Freiheit’s personalities-from-abroad questionnaire, for the November 11 issue. You’re in good company was his matter-of-fact message. But get to it.

The record time for answering the JF questionnaire: six minutes. Needless to say, I failed miserably to best it.

JUNGE FREIHEIT: Where would you like to be at this very moment?

ILANA MERCER: I‘m strictly reality oriented. I don’t indulge in make-believe. I don’t wish to be where I’m not.

JF: What would you give anything for?

MERCER: I’d give "anything" for freedom from The State, provided "anything" is a figure of speech (no limbs, eyes, etc.)

JF: What does home mean to you?

MERCER: My residence; my house—but also a revival of the thing Edmund Burke called “the little platoon we belong to”; namely an end to the centrally planned transformation of Western communities through forced integration and mass immigration.

JF: What do you consider important in life?

JF: What did you learn from your parents?

MERCER: To think critically about everything, to read voraciously, to be charitable; the love of music and art.

JF: What book has left a lasting impression on you?

MERCER: The concept of a Favorite Book is childish, if you’re a lifelong reader. Lots of books of political theory, philosophy and economics have indelibly influenced my thinking. Lately, it‘s been Clyde N. Wilson’s “The Yankee Problem: An American Dilemma.”

JF: Which event in history has been the most incisive and far-reaching for the world?

MERCER: The advent of Communism. Its agents killed the most people and poisoned the most minds, for posterity. Communism/socialism continues to pollute every nook-and-cranny of state and civil society.

JF: What would you want to change?

JF: What do you believe in?

MERCER: Individual sovereignty, secession down to the individual.

JF: Which values should we pass down to our children?

MERCER: Traditionalists value hierarchy. An infantile, immoral society deifies The Child. Kids should follow Florence King's injunction that "children have no business expressing opinions on anything except, 'Do you have enough room in the toes?'"

JF: What does death mean to you?