Was the George Floyd Justice in Policing Act Authored By a Cuban Agent?

Humberto Fontova
|
Posted: Mar 13, 2021 12:01 AM
Share   Tweet
The opinions expressed by columnists are their own and do not necessarily represent the views of Townhall.com. 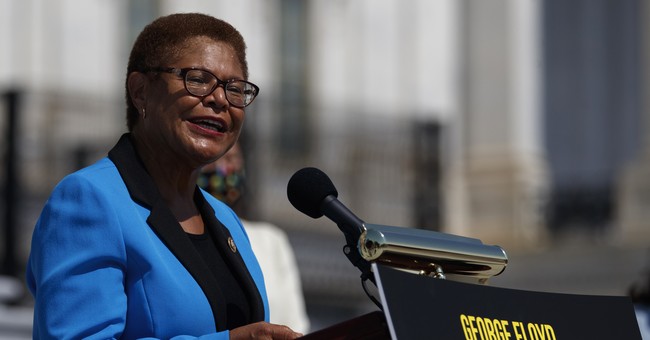 “Lawmakers in the House passed a bill this week aimed at reforming policing in this country. It's called the George Floyd Justice in Policing Act…this bill would ban chokeholds and make it easier to pursue misconduct claims against officers, among other reforms. The lead author is Congresswoman Karen Bass from California,” reported NPR on March 5.

Well, Rep. Karen Bass certainly qualifies as an expert on “police misconduct,” considering that for decades she’s been providing aid and comfort to a police state that jailed and tortured political prisoners at a higher rate than Stalin’s during the Great Terror and murdered more in its first three years in power than Hitler’s murdered during his first six.

In fact, the terrorist offshoot from the SDS (Students for a Democratic Society) known as The Weathermen and staffed most famously by Barack Obama’s future “neighbors” Bill Ayers and Bernadine Dohrn served as the Intelligence Directorate's (DGI) U.S. recruitment officers at the time, which proved easy. Castro’s DGI and their KGB masters had other goals in mind, as we’ll see in a minute.

Perhaps a declassified FBI report (from well before the bureau was run by people like Comey and Wray) might help:

“The ultimate objective of the DGI (Cuban Intelligence’s) in setting up the Venceremos Brigades...was the recruitment of individuals who are politically oriented and who someday may obtain a position, elective or appointive, somewhere in the U.S. Government, which would provide the Cuban Government with access to political, economic and military intelligence.”

Interestingly, right at about this time, Cuba’s DGI, which had always been mentored by the KGB, came under direct and total control of the KGB. Let’s see the sworn testimony of a high-ranking DGI defector during Congressional hearing titled: "The Role of Cuba in International Terrorism and Subversion, Intelligence Activities of the DGI," Feb. 26, 1982, U.S. Senate Subcommittee on Security and Terrorism, Feb. 26, 1982:

“Mr. Gerardo Peraza (a high-ranking Cuban intelligence defector): Between the years 1959 to 1970 there was close cooperation between Cuba and the KGB. But by beginning of 1970, the intelligence service of Cuba was placed under the DIRECT ORDERS of KGB Colonel Simonov.”

“Senator DENTON. Are you personally aware, Señor Peraza, that there were any successful placings of high-ranking DGI or KGB agents within the U.S. intelligence service or any defense or security-oriented agencies?"

“Senator DENTON. I imagine we better have a closed session on that."

“As many as half of the Americans who flocked illegally to Cuba in the '60s and '70s as volunteers were eventually recruited by Cuban intelligence. And some of these political pilgrims were converted into reliable, long-term undercover assets,” later revealed Cuban intelligence defector Roberto Hernandez del Llano to CIA analyst Brian Latell.

In fact, according to yet another high-ranking Cuban DGI defector, Jesus Perez Mendes, the DGI didn’t just control the Venceremos Brigades of starry-eyed American students of the time, they actually helped pick them!

Ok, that Karen Bass often traveled to Cuba in the early '70s when it was officially illegal and very difficult, we’ve established. But what of it, Humberto, some might ask? I mean, a lot of college kids were stupid and duped at the time. Rep. Bass is much older and perhaps wiser now. Hasn’t Rep. Bass mended her ways?

In fact, Rep. Bass has continued visiting totalitarian Cuba (which carefully vets all political visitors) and has been traveling there quite often. Plus, while there, she seems to be hob-knobbing with some pretty shady people, intelligence–wise.

For instance, in one of her (apparent) publicity photos, we find Bass in the company of a KGB-trained Cuban spy, Josefina Vidal, who was expelled from the U.S. in 2003, pursuant to the arrest of top Cuban spy Ana Belen Montes, responsible for the most damaging penetration of the U.S. Department of Defense in recent history. Montes was convicted of the same crimes as Ethel and Julius Rosenberg.

While accompanied by Vidal, the seemingly enchanted Karen Bass also poses in front of pics of Raul Castro, Fidel Castro and Che Guevara, whose lifelong obsession was the destruction of the U.S. (Please see here if you think I’m exaggerating.)

Now let’s go back to those Congressional hearings for more tidbits regarding Bass’ Cuban companions:

“Sen. Denton:  (Julian Torres) Rizo was at the DGI (Cuba’s KGB-controlled intelligence service) Station chief in New York for 3 years, as I understand it."

"Sen. DENTON. He was an active DGI agent in the Venceremos Brigade camps?"

And wouldn’t you know it?  In another apparent publicity pic from one of her red-carpet trips to Stalinist, terror-sponsoring Cuba, we find an (apparently) enchanted Karen Bass accompanied by an old Venceremos Brigadista comrade named Gail Reed, who is married to Julian Torres Rizo!

So regarding this columns’ title: We report, you decide. And please peruse these posts and all the links for thorough documentation of the seemingly “McCarthyite” items presented above.