Humberto Fontova
|
Posted: Dec 14, 2019 12:01 AM
Share   Tweet
The opinions expressed by columnists are their own and do not necessarily represent the views of Townhall.com. 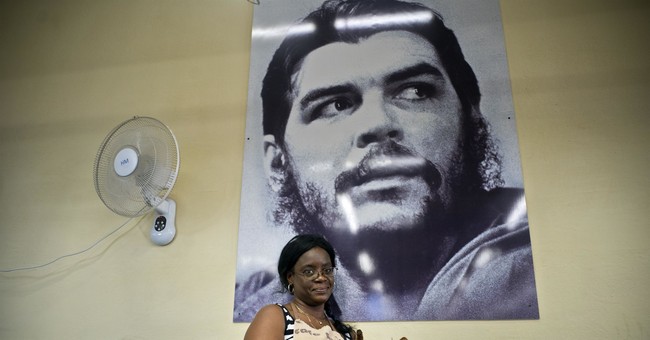 “Sixteen-year-old activist Greta Thunberg has quickly risen to prominence with her clarion call for climate action and Time's naming her its 2019 Person of the Year this week.” (NPR, 12/12)

“So ridiculous. Greta must work on her Anger Management problem, then go to a good old fashioned movie with a friend! Chill Greta, Chill!” (President Trump tweet 12/12)

Interestingly, Greta Thunberg has recently become a darling of the media in Stalinist Cuba, a  regime whose founders craved a pretty dramatic form of “climate change.”

And speaking of ridiculous Time magazine bestowing honors on people who desperately needed to chill:

So, OK, Time was obviously not making a moral judgment call on these rankings. “We look at world leaders whose legacies have stood the test of time,” they explain. Fine. Sounds perfectly reasonable and objective.

Time magazine’s last ranking of Che Guevara in 1999 as among “The 100 Most Important People of the Century,” at first glance also appeared objective. Until you read further and found that they placed Che in the “Heroes and Icons” section, alongside Anne Frank, Andrei Sakharov, Rosa Parks and Mother Teresa. On Fox News, the late Alan Colmes once scoffed at my claim for this—then gaped semi apologetically at my proof.

“Nothing could be more vicariously gratifying than Che Guevara’s disdain for material comfort and everyday desires,” read Time’s Encomium to Che Guevara in 1999 composed by Duke Professor Ariel Dorfman, whose “research” overlooked some important details. To wit:

“Che’s house was among the most luxurious in Cuba,” writes Cuban journalist Antonio Llano Montes about the Mansion-estate Che Guevara “acquired” promptly upon entering Havana in January 1959. After a hard day at the office signing firing-squad murder warrants and blasting teen-agers’ skulls apart with the coup-de-grace from his .45, Che Guevara repaired to his new domicile just outside Havana on the pristine beachfront (today reserved exclusively for tourists and Communist party members, by the way.) Until a few weeks prior, it had belonged to Cuba’s most successful building contractor. “The mansion had a boat dock, a huge swimming pool, seven bathrooms, a sauna, a massage salon and several television sets,” continues Llano Montes. “One TV had been specially designed in the U.S. and had a screen ten feet wide and was operated by remote control (remember, this was 1959.) This was thought to be the only TV of its kind in Latin America. The mansion’s garden had a veritable jungle of imported plants, a pool with waterfall, ponds filled with exotic tropical fish and several bird houses filled with parrots and other exotic birds. The habitation was something out of A Thousand and One Nights.”

The “austere idealist,” Che Guevara, hadn’t done too badly for himself in this real estate “acquisition” (hand over all your property Mr. Cuban contractor, or face a firing squad.)

“Che was the embodiment of a man true to his word,” asserts yet another Time encomium to Che Guevara by Dan Fastenberg, a recent graduate of Columbia School of Journalism.

Alas, the “research” by Time magazine’s “gallant crusader for the truth” (Columbia School of Journalism’s term for its graduates) again appears deficient:

“I am not a communist and have never been a communist,” was how Che Guevara gave his “truthful word” to The New York Times on Jan. 4th 1959. “It gives me great pain to be called a communist,” he continued truthing.

“Che was the embodiment of a man who never backs down and is willing to pay the ultimate price,” continued Fastenberg in his Time magazine fluff piece.  “After Guevara was captured fomenting revolution in Bolivia in 1967, he said, “Go ahead and kill me, I am just a man.”

In fact, on his second to last day alive, Che Guevara ordered his guerrilla charges to give no quarter, to fight to the last breath and to the last bullet. With his men doing exactly that, Che snuck away from the firefight, and crawled towards the Bolivian soldiers doing the firing.

“Don’t Shoot! I’m Che Guevara! I’m worth more to you alive than dead!”

The details of Che’s capture are available in the official records of the men who captured him. Columbia School of Journalism graduates and Time “investigative journalists” are no more barred from reading those records than is this writer.

These documents record this “embodiment of a man who never backs down” dropping his fully loaded weapons on Oct. 8, 1967 and whimpering: “Don’t Shoot! I’m Che Guevara! I’m worth more to you alive than dead!”

But it was only after his (obviously voluntary) capture that Che segued into full Eddie-Hasquell-Greeting-June-Cleaver-Mode. “What’s your name, young man?!” Che quickly asked one of his captors. “Why what a lovely name for a Bolivian soldier!”

“You are a very special person!” Che then commended the soldier’s commander, Captain Gary Prado. “I have been talking to some of your men. They think very highly of you, captain Prado!..Now, could you please find out what they plan to do with me?....I don’t suppose you will kill me. I’m surely more valuable alive!”

His Bolivian captors viewed the matter differently. In fact, they adopted a policy that has since become a favorite among Americans who encounter (so-called) endangered species on their property: “Shoot, shovel, and shut-up.”

Justice has never been better served, Time’s encomiums notwithstanding.