Humberto Fontova
|
Posted: Nov 09, 2019 12:01 AM
Share   Tweet
The opinions expressed by columnists are their own and do not necessarily represent the views of Townhall.com. 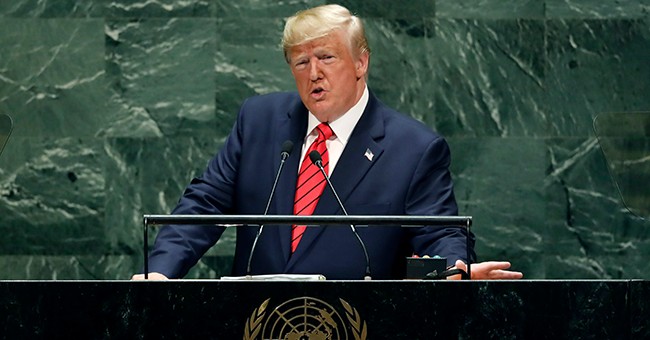 No, amigos. You will not find the Cuckoo’s Nest-like clown show this week at the United Nations described in the mainstream media as succinctly as in this column’s title. Instead we get:

“The U.N. General Assembly voted overwhelmingly Thursday to condemn the American economic embargo of Cuba for the 28th year. The vote in the 193-member world body was 187-3 with the U.S., Israel and Brazil voting “no,” and Colombia and Ukraine abstaining.” (AP, Nov. 7.)

“Oddly” it’s that notorious “colluder” with our president (as we’re given to understand by the Media--Democrat complex) who always squeals the loudest:

“Russia Calls On US To Immediately Lift Cuba Blockade - By tightening the grip of sanctions and reinforcing the trade, economic, financial and energy blockade of Cuba,” squealed Russian Deputy Foreign Minister Alexander Pankin to the UN General Assembly. “Washington seeks to prevent Cuban citizens from exercising their right to a dignified life. Essentially, Washington (under Pres. Trump) has embraced the policy of slowly seeking to introduce a genocide, targeting the Cuban people. Former US President Barack Obama relaxed US policy toward Cuba…However, current President Donald Trump toughened the policy once he came to power in 2017.”

How dare Putin’s captive media organ (Sputnik) berate this “Putin-colluder” of a U.S. president? And compliment his “anti-Russian” predecessor? Haven’t they heard? Didn’t they get the memo from their boss? Don’t they watch the U.S. media? Don’t they listen to Nancy Pelosi and Adam Schiff?

Those of us who rooted for Nurse Ratched over the pinko-commie Jack Nicholson in One Flew Over the Cuckoo’s nest got a kick out of our UN Ambassador Kelly Craft’s reply to the Cuckoo’s nest known as the UN General Assembly:

“Like all nations, we get to choose which countries we trade with. This is our sovereign right. What is even more concerning is that every year, this body entertains the claim that the Cuban regime has no other choice than to abuse its own people in response to the embargo. Our embargo does not force the Cuban regime to arrest independent journalists and human rights defenders without cause. This is a choice, freely made.”

Touche, Ambassador Craft!  At any rate, we certainly “feel your pain,” Russia--those of us conversant with recent Russian-Cuban relations, that is.

After all, who can blame you for desiring that the U.S. taxpayer be the saps who prop up your kleptocratic client-state on our doorstep? Of course your client state’s swarm of agents of influence (on the payroll and off) among the U.S. media, Democrats and libertarians phrase the matter a bit differently. They’re always moaning and whining about the “cruel, ineffective and anachronistic U.S. embargo of Cuba.”

On the other hand, people who actually bother to study this issue (and who want what’s best for the U.S.)  have long recognized these economic sanctions against Cuba as among the crown jewels of post-war U.S. foreign policy. President Trump certainly does. So he’s been relentlessly tightening and enforcing them--to the sputtering rage of those forced to get fleeced in lieu of the American taxpayer. Take Russia for instance (please!)

As I recall, Captain and Tennille once penned a song regarding recent Putin-Castro relations.

In fact, Castro has stuck it to every single sap government which has extended him credit-- without exception.  Meanwhile the American taxpayer–thanks to the so-called embargo (rehabilitated, fortified and strongly enforced by the Trump team)–remains safe from attacks on his wallet from the welfare-queen Castro regime.

For the past 29 years at around this time members of the UN vote ritually, and almost unanimously, to condemn the U.S. for our (so-called) embargo of Cuba. Ritually only Israel votes with us during this charade. This year, thanks to anti-communist President Bolsonaro, Brazil stood shoulder to shoulder with us in defying the UN vote.

Two years ago, Obama actually instructed his UN ambassador to “abstain” (a polite way of joining in the condemnation) from voting.

Here’s one issue on which the American taxpayer can look across the oceans, touch his nose with his thumb, extend his hand, and fan his fingers while snickering; “you suckers!”

Of course we don’t hear or read much about Castro’s burglaries of his sap creditors from the Fake News Media. What we read is how these economically-sophisticated nations all “trade” with “Cuba” -- and that because of the machinations of the sinister and sleazy “Right-Wing-Cuban-Exile Lobby” American businesses and their workers miss out on this financial bonanza of “trading with Cuba.”

All of those Castroite burglaries are on top of the $32 billion in Castroite debt Putin’s Russia “wrote-off” just three years ago.

We’ve been spared such fleecing because on Oct. 1960—right after Castro’s gunmen stole $7 billion from U.S. businessmen and tortured and murdered a few who resisted-- President Eisenhower imposed the first economic sanctions against the thieving, mass-murdering Stalinists who mostly (still) run Cuba. These sanctions grew into one of the crown jewels of recent U.S. foreign policy. And now under President Trump they’re being enforced unlike any time in recent history. This enforcement is already panicking the Castro regime’s partners-in-theft. (i.e. European and Canadian companies who operate property in Cuba stolen at Soviet gunpoint from American citizens.)