Humberto Fontova
|
Posted: Sep 22, 2018 12:01 AM
Share   Tweet
The opinions expressed by columnists are their own and do not necessarily represent the views of Townhall.com. 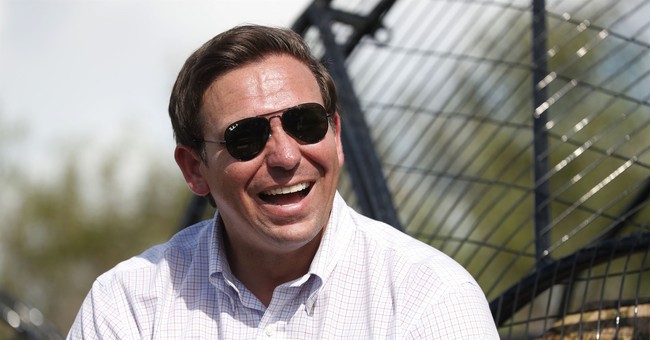 “Ron DeSantis can abandon his post, but he can’t avoid questions about why he chose to associate himself with hateful fringe organizations.” - Florida Democratic Party Chairwoman Terrie Rizzo. (i.e. the David Horowitz Freedom Center.)

Just so I’m clear: According to prominent Democrats the David Horowitz Freedom Center qualifies as a “hateful organization!” But (as we’ll see in a second) the mass-murdering, mass-torturing, terror–sponsoring Castro regime does not?

Now over to the Democrat Party’s media subsidiary:

“The Washington Post reports that Congressman Ron DeSantis, the Republican nominee for governor in Florida, spoke four times at a conference organized by a hard-right conservative who has been labeled as a ‘driving force of the anti-Muslim, anti-immigrant and anti-black movements’ by the Southern Poverty Law Center.” (i.e. David Horowitz)

Let’s compare associations—and let’s start with a famous association by two-time candidate for the Democrat presidential nomination Jesse Jackson. Let’s see if perchance his associate qualifies as an “extremist.”

“Viva Fidel! Viva Che!”   bellowed Jesse Jackson while arm in arm with Fidel Castro himself in 1984 upon one of his classic Democrat pilgrimages to Stalinist Cuba.

Now over to Democrat presidential candidate, Presidential Medal of Freedom winner, and “Conscience of the Democratic party,” George Mc Govern: "Fidel Castro is very shy and sensitive, I frankly like him and regard him as a friend."

Moving now to former President of the United States and official "Elder Statesman” of the Democrat party, Jimmy Carter: “Fidel Castro first and foremost is and always has been a committed egalitarian. He wanted a system that provided the basic needs to all -- enough to eat, health care, adequate housing and education. Cuba has superb systems of health care and universal education…We greeted each other as old friends.”

(Please note than none of these associations took place during those sometimes necessary official presidential/diplomatic duties where a U.S. president is forced to mingle with unsavory characters. No, these Democrat luminaries were all acting unofficially at the time.)

But actions speak louder than words. So take Democratic Rep. Charles Rangel, who, during a thundering ovation in the mass-murderer's honor in Harlem’s Abyssinian Baptist Church in 1995 and between deafening chants of "FIDEL!---FI-DEL!--VIVA-FI-DEL!" and with Congresswoman Maxine Waters looking on in rapture, waddled up to the podium and engulfed Castro in a mighty bear hug.

And recall that Time Magazine in January of 1996 hailed Fidel Castro as "The Toast of Manhattan." The title referred to Castro's reception by Manhattan's beautiful people on the terrorist/torturer’s visit to New York.

"The Hottest Ticket in Manhattan," also read a Newsweek story that week, referring to the social swirl that engulfed Castro in New York by the media luminaries. These included Peter Jennings, Tina Brown, Bernard Shaw, Mike Wallace, Barbara Walters, among many, many others.

In fact, all in attendance clamored for autographs and photo ops of the Stalinist who craved to nuke and entomb them and all of New York City. Diane Sawyer was so overcome in the mass-murderer's presence that she rushed up, broke into that toothy smile of hers, wrapped her arms around Castro and smooched him warmly on the cheek.

Now over to the Washington Post’s denunciation of Ron DeSantis for “association with extremists.”

The Washington Post’s National Security reporter Nick Miroff is married to an apparatchik of the Stalinist, terror-sponsoring (but NOT “extremist,” according to the WaPo’s definition of the term)   Castro regime named Camila Pineiro Harnecker. She is the daughter of the founder of the Castro regime’s Military intelligence service. This notorious KGB-protege, Che Guevara-chum and Stalinist torturer was named Manuel “Barbarroja” Pineiro.

For years Manuel “Barbaroja” Pineiro served for the Castros exactly as Yezhov, Yagoda and Beria served for Stalin–as director of mass-murder and torture.

And wouldn’t you know? Like so many others in such “sensitive” positions within Stalinist regimes (Yezhov, Yagoda, Beria– indeed, like Che Guevara himself), Manuel Pineiro’s usefulness to his employers finally expired. In 1998 the infamous “Barbarroja” himself got a taste of his own medicine and was “disappeared.” For the brain-dead his Stalinist “comrades” concocted a story of a “car-accident.”

A couple years ago The Washington Post ran an “in-depth” article (by Nick Miroff) on an islet off the southwestern coast of Cuba called The Isle of Pines which hosted the biggest prison/torture and forced-labor complex for political prisoners in the history of the Western world. Tens of thousands of American citizens of Cuban heritage had family members tortured there by Castro’s Stalinist regime. Many had family members murdered there.

Dozens of the surviving torture victims are U.S. citizens and live in the U.S. today. Interviews (or even mention) of these people would have sure added a relevant and eye-catching “human-interest” quotient to the “in-depth” article. After all, these people (most of whom are in the phone book) qualify as the longest-suffering political prisoners in modern history.

Alas! Except for the Cuban-American readers of the WaPo’s “in-depth” story by Nick Miroff, no reader would have guessed any of the above regarding this notorious prison torture-complex.

Maybe because most of the victims were sent to Cuba’s Isle of Pines prison/torture/ forced-labor complex on the orders of the man (Manuel “Barbarroja” Pineiro) who would have become father-in-law to the Washington Post’s Nick Miroff, the author of the story on the Isle of Pines, whose wife (Camila Harnecker Pineiro) and mother-in-law remain active apparatchiks of Cuba’s Stalinist regime.