Humberto Fontova
|
Posted: Jul 07, 2018 12:01 AM
Share   Tweet
The opinions expressed by columnists are their own and do not necessarily represent the views of Townhall.com. 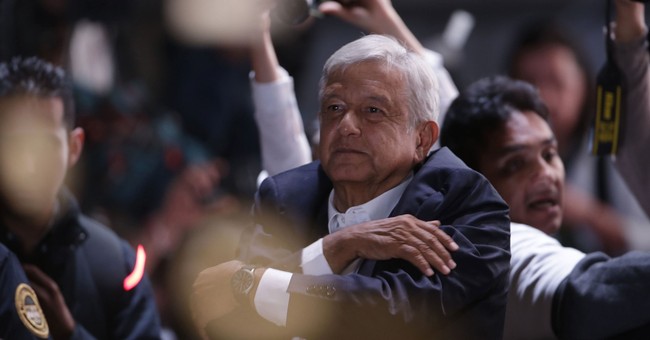 "We have a son named Jesus Ernesto. The first name is for Jesus Christ and the second for Ernesto Che Guevara…an exemplary revolutionary who gave his life for his ideals…Fidel Castro is a giant. He maintained Cuba as sovereign and free…Yes, he (Donald Trump) stokes racism…Trump shouldn’t forget Mexico is an independent country. … No border walls and no chasing our fellow countrymen who migrated to the United States.” (Andrés Manuel López-Obrador in an interview with Univision’s Jorge Ramos.)

Got it, amigos? Apparently a nation’s “independence and sovereignty” weigh big with Mexico’s new President-elect Lopez-Obrador. His role models in that regard consist of mass-murdering Soviet stooges. His villain consists of a freely-elected U.S. president who seeks to uphold his nation’s Constitution and protect his nation’s borders. (i.e. its sovereignty.)

In the historic annals of unrequited love few cases rival the affair by Mexicans and “Chicanos” with Che Guevara. Che’s iconization is sufficiently documented by U.S. Chicano groups in their murals (i.e. graffiti.)  To celebrate their Amerindian Aztec culture these “Aztlan” types seem to plaster this lily white European-Argentinian racist’s mug on practically everything they paint. Mexico City itself features an iconic bust in honor of Che Guevara in Mexico City’s prestigious Museo De San Carlos.

Perhaps a word with some Bolivian Amerindians who actually experienced Che Guevara’s plans to Stalinize their culture would help. In 1967 these (overwhelmingly indigenous) Bolivians (with help from U.S. Green Berets and CIA operatives) made short work of this Chicano hero. If a picture’s worth a thousand words than this one’s worth a million. If irony shouts these pictures bellow. Please note the obvious ethnic compositions of the gentlemen proudly and triumphantly holding their guns over their vanquished “liberator” from European “oppressors.”

Prior to “invading” Cuba, Castro’s “guerrillas” “trained” in Mexico.  Some of these former “guerrillas” later defected to the U.S. and revealed how the sneering Ernesto “Che” Guevara constantly insulted his Mexican hosts. Hence, the Guevara quote mentioned above.

It was in 1955 that a Cuban criminal named Fidel Castro linked up with an Argentine hobo named Ernesto Guevara in Mexico City. Minus this historic hook-up everything points to Ernesto (shortly known a “Che”) continuing his life of a traveling hobo, panhandling, mooching off women, staying in flophouses and scribbling unreadable poetry.

Instead this thoroughly unimposing vagabond and psycho named Ernesto Guevara had the magnificent fortune of linking up with modern history's top press agent, Fidel Castro, who for over half a century had the worldwide Fake News Media anxiously scurrying to his every beck and call and eating out of his hand like trained pigeons. His brother was no chump at this either.

Those champions of  “national sovereignty” as hailed by (Lopez –Obrador)  Fidel and Raul Castro were in Mexico plotting with KGB agents Osvaldo Sanchez and Nikolai Leonev while putting together a guerrilla band to invade Cuba, overthrow the black/indigenous Cuban head-of-state (Fulgencio Batista) and install a Soviet satrapy.  With the financial help of his wealthy (and duped) Cuban backers of the time, Castro hired a Cuban Korean war veteran named Miguel Sanchez to train his guerrilla band. None of the trainees had the slightest combat-experience so their curiosity on the matter of killing people did not surprise Sanchez.

Another item Sanchez recalls about the sneering Ernesto Guevara was his constant belittling of his hosts: “These Mexicans are mostly a rabble of illiterate Indians,” Che Guevara often snickered.