Humberto Fontova
|
Posted: Jun 16, 2018 12:01 AM
Share   Tweet
The opinions expressed by columnists are their own and do not necessarily represent the views of Townhall.com. 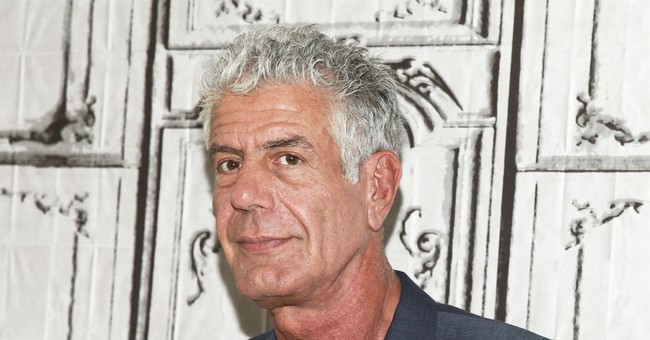 “Ultra-hipster” Bourdain specialized in snarking at travel and food-writers who “crassly commercialized” their reviews: such as in "The World's 50 Best List." "The guys who put together that list all call each other and horse trade. It's good for business, it's good for chefs, but I mean, no one takes it seriously. It's not even a popularity contest, it is a list brokered by a lot of people with common interests. They're in the business."

In brief, Antony Bourdain wore his “anti-corporate hipness” on his shirtsleeve, always smirking and snarking that “evil corporations” and “crass commercialism” repelled him.

But he gleefully signed on as a shameless tourism agent for the Castro-Family-and-Military Crony-Crime Syndicate, a thieving, murdering criminal-corporate empire that makes the Mafia look like Boy Scouts of America.

“I will never eat in his (Donald Trump’s) restaurant. I have utter contempt for him, utter and complete contempt… I’m not going. I’m not going.” (Anthony Bourdain, Eater.)

Bourdain sure seemed sniffish about patronizing (much less publicizing) restaurants belonging to deviants from his political worldview—which is fine. That was his privilege.

But what does it say about the “principled” celebrity chef’s propagandizing for restaurants owned by the racist, mass-murdering, terror-sponsoring Castro-Family-and-Military-Crony Crime-Syndicate (habitually and grotesquely mislabeled as “Cuba” by Bourdain’s employers at The Travel Channel and CNN)?

"Yes, Go to Cuba!" gushed Bourdain at the end of a show he did from Cuba in 2011. Hypocrisy, anyone?

Anthony Bourdain — this “hipster” chef — headlined several propaganda junkets (his shows from Cuba) to help secure the financial lifeline for a Stalinist regime that jailed and tortured the longest suffering black, female and gay political prisoners in the modern history of the Western Hemisphere.

Bourdain’s bootlicking services for the financial welfare of the terror-sponsors who craved to nuke his nation also included - not only several tourism commercials for the Castro family (pathetically disguised as Travel Channel and CNN shows) -- but also an official “Tony Bourdain’s Guide to Cuba.”  Along with a handy-dandy link from Bourdain’s page to the Castro regime-owned Hotel Nacional — for quick and easy reservations!

Those charming, smiling hosts who escorted Bourdain around the Castro family fiefdom were all regime apparatchiks. Immediately upon applying for his Cuban visa, well before Bourdain even set foot in Cuba, Castro’s intelligence had Bourdain completely sussed and his future escorts completely briefed. The procedure started the day he applied for a Cuban visa, as also explained by Lt. Col. Christopher Simmons. That your official “guides” while officially visiting a Communist nation were regime apparatchiks was common knowledge even to proto-imbeciles all during the Cold War. Bourdain was born in 1956.

As mentioned, among Bourdain’s snarks against “The World’s 50 Best (Restaurants) List” is the preceding “horse trading.” "The guys who put together that list all call each other and horse trade… They're in the business."

Not that any conceivable "horse-trading" transpired between The Travel Channel and CNN and the Stalinist apparatchiks who issued Bourdain’s Cuba visas!

If only Bourdain had demonstrated 1/100 of his vaunted "spunk" and "feistiness" against a regime that jailed political prisoners at a higher rate than Stalin during the Great Terror, murdered more Cubans than Hitler murdered Germans during the Night of Long Knives, and craved to nuke his homeland.

It’s an old story, actually. Now where had we seen this lion to lamb metamorphosis before? Well, try Dan Rather, Andrea Mitchell, Barbara Walters, etc. etc. etc. when visiting the Castro-Family-Fiefdom.  They say weird things happen in the Bermuda Triangle. I say much weirder things happen in the Florida Straits.

Let a Fake News reporter confront a Republican official, and he's a roaring, jabbing, snarking Torquemada. North of the Florida Straits and in front of Republicans no question is too rude, irrelevant or offensive; no demeanor too haughty, combative or insolent.

But just let these identical paragons of "feistiness" cross the Florida Straits and find themselves in front of "President" Castro or any of his apparatchiks—and suddenly he’s Eddie Haskell addressing June Cleaver.

During one of his Cuba tourism commercials Bourdain was shown smilingly hob-nobbing with Castro-regime apparatchik/photographer Roberto Salas. The smile on Bourdain’s face while gazing at pictures of mass-murdering terrorists Fidel Castro and Che Guevara says it all. Check it out here.