Humberto Fontova
|
Posted: May 19, 2018 12:01 AM
Share   Tweet
The opinions expressed by columnists are their own and do not necessarily represent the views of Townhall.com. 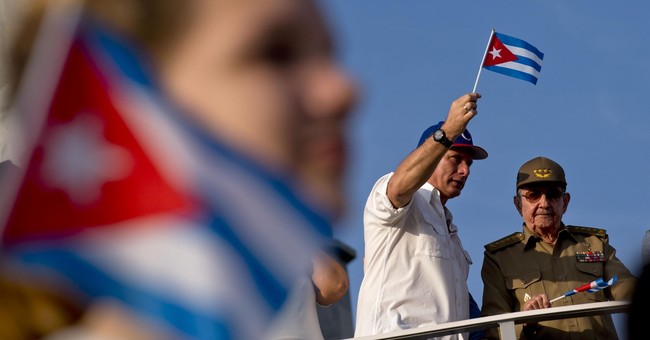 "We called the White House and they acted swiftly on the Friday event, which has since been postponed," said a staff member for Republican Florida Sen. Marco Rubio, who complained that the event would have openly undermined President Donald Trump’s agenda on Cuba.

"The event in question has been postponed," a State Department official confirmed.

"This (event) was designed to embarrass the president and Pompeo—somebody needs to be held to account," one source said. "The fact that State Department officials were advancing a program that is so slanted and completely at odds with the president's directive on Cuba, I am concerned what else they have done or what haven't they done." (As reported by Susan Crabtree of the Washington Free Beacon.)

The “event” was a “seminar,” an “exchange of ideas”titled “Cuba under Díaz-Canel" put on by State department's Bureau of Intelligence and Research for government employees and featuring several Cuba “experts.”

Diaz–Canel, by the way, is the pathetic eunuch and puppet the billionaire Castro-Family-Crime-Syndicate and their millionaire drug-trafficking and military cronies are trying (desperately!) to sell to the world as Raul Castro’s “reformist successor.” We recently laughed-off those Castro-agent claims here.

Oh…by the way: ten years ago upon Fidel’s “retirement” some of the very same Cuba “experts” scheduled for this (Deep) State Dept. event were peddling Fidel’s brother/successor Raul as “a capitalist reformer.” Remember that joke?

At a symposium on the issue at the time your humble servant went on the record scoffing at such claims and predicting nothing in Cuba would change for the better, while hinting that these “experts” were plain and simple propagandists for the Castro regime, intent on securing the regime an economic lifeline mostly at the expense of the U.S. taxpayer.

I was proven precisely correct, as documented here.

Under Raul-rule repression against the Cuban people indeed continued unabated and Cuba (formerly an immigrant-inundated nation with a higher standard of living than much of Europe) retained her prestigious position alongside North Korea and Zimbabwe in the index of economic freedom.

In brief, the foiled (Deep) State Dept. seminar was to be a taxpayer-funded propaganda-palooza for the terror-sponsoring Castro regime put on by that regime’s (unregistered) U.S. lobbyists and agents of-influence.

But perhaps the terms “unregistered lobbyist” and “agents-of-influence” strikes some of my amigos as unnecessarily hyperbolic? Or perhaps even shamelessly McCarthyite? Or perhaps even untrue? Fair enough. Let’s have a closer look:

Among the featured “experts” at the cancelled event was a former State Dept. employee named Phil Peters, who formerly also served as Vice President of a “Think-Tank” titled the Lexington Institute. Peters often facilitates and accompanies Senator Jeff Flake’s on his frequent trips to the Castro-Family-Fiefdom. Unlike the thousands upon thousands of Cubans who annually risk their lives to escapeCuba, Mr Peters-- like Senator Flake-- slips in and out of totalitarian Cuba seemingly at will. This red carpet by the totalitarian Castro regime for Mr Peters-- like the one for Senator Flake—has been rolled out for many years. In fact Flake and Peters often stroll down this red carpet together.

A few years ago a court discovery document revealed astonishing items about the relationship between the Castro regime and Senator Flake’s close and long-time accomplice on Cuba policy Mr Phil Peters. Turns out, that the huge Canadian mining company Sherritt International (one of the Castro regime’s top business partners) was funneling under-the-table payments to Phil Peters.

You see, amigos:In 1960, Castro forces stormed into almost 6000 U.S. owned businesses (worth almost $8 billion today) in Cuba and stole them all at gunpoint. A few American business owners resisted and were tortured and murdered. The Inter-American Law Review classifies Castro’s mass-theft of U.S. property as “the largest uncompensated taking of American property by a foreign government in history.”

You’d never guess it from the Fake News Media and their pet Cuba “experts” but this mass-larceny of U.S. property (of which not a penny has been compensated) was the reason for imposing the Cuba “embargo” in the first place.

Like a snickering vulture, Canada’s Sherritt International rubbed its hands and gleefully partnered with the Castro regime to occupy and run the stolen and formerly U.S.-owned Moa nickel plant, making them probably the world’s top trafficker in stolen U.S. property. Consequently their CEO was barred by U.S. law from entering the U.S.

“Canada’s Sherritt Int. works quietly in Washington,” start’s the discovery document from several years ago.“Recently it has given money to a former State Department employee, Phil Peters, to advance its interests.The money to Peters goes through contributions to the Lexington Institute, where Peters is a vice president. Because the Lexington Institute is a 501(c) (3) not-for-profit, there is no public record of Sherritt’s funding. This has allowed Peters to advise and direct the Cuba Working Group (founded by Jeff Flake in 2002) in ways beneficial to Sherritt…for instance when the House Cuba Working Groupmade its first visit to Cuba last year (2002) at Peters’ behest, it made a point of visiting Sherritt’s soybean-processing facility and staying in a hotel in which Sherritt has a 25% interest.”

In brief: one of the Castro regime’s top business partners—probably the world’s top trafficker in stolen U.S. property, a company whose CEO was barred by U.S. law from entering the U.S.-- was funneling under-the-table payments to a person billed as an “impartial Cuba expert” by the (Deep) State department!

But in fact, serving the Castro family’s interests is nothing new for our (Deep) State Dept. Let’s take a little stroll down history lane:

“You have been quoted, Ambassador Gardner (U.S. Amb. to Cuba 1953-57), as referring to, ‘Castro worship’ in the State Department in 1957. Mr. Gardner, do you have any idea why the United States allowed Castro to get arms from the United States, and would not allow Batista to have arms to preserve his government…. You have been quoted as saying that Washington, ‘pulled the rug out” from under Batista?’ ” (Sen. Thomas Dodd, Congressional hearings Aug. 27, 1960.)