Humberto Fontova
|
Posted: Oct 28, 2017 12:01 AM
Share   Tweet
The opinions expressed by columnists are their own and do not necessarily represent the views of Townhall.com. 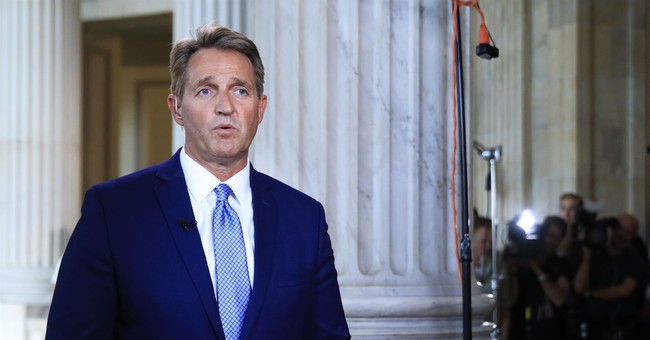 Quite fittingly, in his “retirement” (will not seek re-election) speech this week Sen. Jeff Flake, this relentless champion of the relentlessly Stalinist Castro regime, attacked Communist-fighter Joe McCarthy.

“As I contemplate the Trump presidency, I cannot help but think of Joseph Welch,” Flake emoted. “Welch spoke: “Until this moment, Senator (McCarthy), I think I never really gauged your cruelty, or your recklessness… Have you no sense of decency, sir, at long last? Have you left no sense of decency?... The moral power of Welch’s words ended McCarthy’s rampage on American values.”

Most people forget that, as Ann Coulter patiently explained in her invaluable book "Treason," at the time of this (now) famous exchange, lawyer Welch (who also erupted in tears during this exchange with McCarthy) was defending his lawyer colleague Frederick Fisher from McCarthy’s charge that Fisher had blatant Communist associations.

Well, as McCarthy patiently explained during those hearings, Fisher had, in fact, belonged to the National Lawyers Guild, which (not McCarthy) but the U.S. Attorney General of the time (Herbert Brownwell Jr.) had in fact identified as the “legal arm of the U.S. Communist Party.”

Here I’ll hand the floor over to Ann Coulter from her invaluable book "Treason": “Welch’s Army-McCarthy hearings is the essence of liberal argumentation. Welch would say something vicious, McCarthy would reply, and Welch would start crying.”

It says a lot about libertarians that one of their top men on Capitol Hill (Jeff Flake) chose as a role model a weasel Commie-defending lawyer who wept openly in front of cameras and Congress when Joe McCarthy (verbally) handed him his *ss on a silver platter.

And some wonder why libertarians are known as the “Marxists of the Right?”

Jeff Flake has long distinguished himself as the Stalinist Castro regime’s top champion on Capitol Hill. Almost the moment he entered Congress in 2000 Flake co-founded the Congressional “Cuba Working Group,” whose relentless goal has been to build a U.S. economic lifeline to the Castro-Crime-Family-Crime–and-Terror-Sponsoring-Syndicate (habitually and grotesquely mislabel as “Cuba” by the Fake New Media and Jeff Flake).

Oh, sure, like all of Castro’s U.S.–based agents (on Castro’s payroll and off) Flake swears up and down that his decades-long fanatical efforts against the (so-called) Cuba embargo are, in fact, an immensely shrewd ploy to undermine Castroism by showering them with U.S. dollars!

“Hah!” Snort Flake and his anti-embargo cohorts with an eye-roll. “How can you right-wing Cuban-exiles (people with the most knowledge of and experience with Castroism) not comprehend our brilliant plan to end Castroism!”

Well, for starters, Flake along with all his fellow "shrewd underminers of Cuban Communism by a shower of U.S. dollars," all get hero’s treatment in Cuba’s Communist media, limitless visas to visit the Castro’s Communist fiefdom and the red-carpet treatment upon every visit.

Whereas your humble servant is prevented from setting foot in Cuba and denounced as “SCOUNDREL! and TRAITOR!” by the same Communist media which hails Flake and his anti-embargo cohorts as heroes.

I guess those Castros are just too dumb to see through Flake’s devilishly shrewd scheme!

Gosh? I guess those Castros qualify as total nincompoops in the art of maintaining dictatorial power! (Over twice as long as Stalin, four times as long as Hitler and even longer than Kim Il Sung.) Guess those poor deluded Cuban Communist fools have no idea what the brilliantly crafty Jeff Flake was up too!

I apologize for insulting your intelligence with this issue, amigos. But that idiotic “the embargo is Castro’s best friend” meme pops up often and demands a response. So here it is:

If Castro “secretly favors the embargo,” then why did Castro’s secret agents in the U.S. ALL secretly and obsessively campaign AGAINST the U.S. embargo while working as secret agents?

Castro managed the deepest and most damaging penetration of the U.S. Department of Defense in recent U.S. history. The spy’s name is Ana Belen Montes, known as "Castro’s Queen Jewel" in the intelligence community. In 2002 she was convicted of the same crimes as Ethel and Julius Rosenberg, and today she serves a 25-year sentence in Federal prison. Only a plea bargain spared her from sizzling in the electric chair like the Rosenbergs.

Prior to her visit from the FBI and handcuffing, Ana Belen Montes worked tirelessly to influence U.S. foreign policy AGAINST the embargo. The same holds for more recently arrested, convicted and incarcerated Cuban spies Carlos and Elsa Alvarez and Kendall and Gwendolyn Myers. All of these worked tirelessly to influence U.S. policy AGAINST the "embargo," while working as secret agents… Duuuuhhhh?!

As Obama implemented his Cuba “opening” (to cheers from libertarians) your humble servant went blue in the face trying to explain the horrible, but eminently predictable, consequences to some libertarians on John Stossel’s show.