Humberto Fontova
|
Posted: Sep 10, 2016 12:01 AM
Share   Tweet
The opinions expressed by columnists are their own and do not necessarily represent the views of Townhall.com. 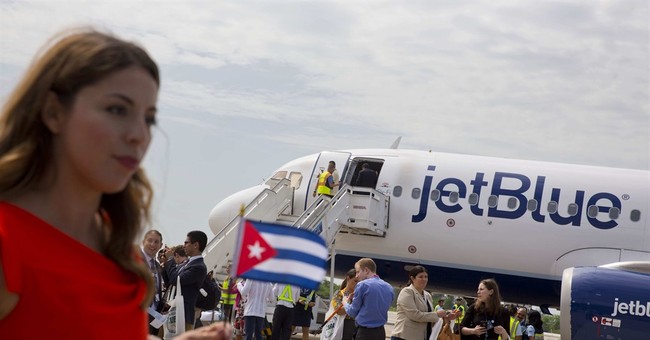 Just when you thought Colin Kaepernick took the cake for denouncing “police murders” while wearing a t-shirt idolizing a Stalinist dictator Fidel Castro, JetBlue runs onto the field to relieve him.

Here’s how JetBlue grabs your attention for their new flights to terror-sponsoring Cuba:

“Welcome to Santa Clara, a university town that played host to the exploits of Marxist revolutionary Ernesto “Che” Guevara.”

Among the “exploits,” of Che Guevara’s revolutionary” (terrorist) group, by the way—in between murdering defenseless Cubans in cold blood-- were the Western Hemisphere’s first plane hijackings. Perhaps JetBlue’s crackerjack publicity dept. is ignorant of this fascinating historical datum?

Che Guevara himself denounced Americans (i.e. most JetBlue customers) as “hyenas fit only for extermination” and boasted of craving (and coming close) to incinerating New York City, where JetBlue is headquartered.

In November 1958 Cubana Airlines Flight 495 from Miami to Varadero, Cuba was hijacked at gunpoint by terrorists belonging to Raul Castro and Che Guevara’s July 26th Movement. The plane crashed into Nipe Bay in eastern Cuba killing 14 passengers. This was one of five hijackings of Cuban planes that year by the terrorists who now run Cuba.

It gets “better.” Here, for instance, is how the mass-murdering terrorist and plane-hijacking pioneer so cheekily honored by JetBlue’s ultra-hip publicity people viewed the folks who will be boarding those very JetBlue flights from the U.S. to terror-sponsoring Cuba in order to further enrich its terrorist rulers:

“If the nuclear missiles had remained (in Cuba) we would have fired them against the heart of the U.S. including New York City (where JetBlue is headquartered). The victory of socialism is well worth millions of Atomic victims.” (Che Guevara, 1962.)

“Against those hyenas (Americans) there is no option but extermination. We will bring the war to the imperialist enemies’ very home, to his places of work and recreation. The imperialist enemy must feel like a hunted animal wherever he moves. Thus we’ll destroy him!” (Che Guevara, 1961.)

Fortunately on Nov. 17th 1962 J Edgar Hoover’s FBI foiled a plot by Castro and JetBlue’s cake icon that would have incinerated thousands of those “hyenas.” These pioneering terrorists and plane hijackers had targeted Macy’s, Gimbels, Bloomingdales and Manhattan’s Grand Central Station with a dozen incendiary devices and 500 kilos of TNT. The holocaust was set for detonation the following week, on the day after Thanksgiving.

A little perspective: For their March 2004 Madrid subway blasts, all 10 of them, that killed and maimed almost 2,000 people, al-Qaeda used a grand total of 100 kilos of TNT. Castro and JetBlue’s cake icon planned to set off five times that explosive power in the three biggest department stores on earth, all packed to suffocation and pulsing with holiday cheer on the busiest and most festive shopping day of the year. Macy’s get’s 50,000 shoppers that one day. Thousands of New Yorkers, including women and children—actually, given the date and targets, probably mostly women and children—were to be incinerated and entombed.

At the time, the FBI relied heavily on “HUMINT” (Human Intelligence.) So they’d expertly penetrated the plot. One by one the ringleaders were ambushed and brought to bay. Had those detonators gone off, 9/11 might be remembered as the second deadliest terrorist attack on U.S. soil.

The terror plot’s ringleaders belonged to the Castro-Cuban Mission to the U.N., and plead “diplomatic immunity.” Other plotters belonged to the New York Chapter of the Fair Play for Cuba Committee, an outfit that became much better known a year later on that very week-- when member Lee Harvey Oswald really racked up some headlines.

More details and full-documentation for this terror plot here.

JetBlue (along with many other U.S. based airlines) will now carry festive planeloads of American “hyenas” to enrich and pay homage to the terrorists who craved to incinerate them. Every tourist penny (or euro, loonie, peso, piaster, etc.) spent in Cuba lands in the pocket of the Castro family and their military cronies who own Cuba’s tourism industry almost lock, stock and barrel.

“Best” of all, Obama has green-lighted (promoted, actually) these flights despite vehement protests from a Transportation Safety Administration Congressional Subcommittee. These lawmakers face a mainstream media blackout while pointing out that airport security for these Cuba flights has been left in the hands of the terror-sponsoring, airplane highjack-pioneering, Iran-allied Castro regime.

So: “Sit back! Relax! And enjoy your flight!...We thank you for choosing JetBlue!”