Trump Sides with The Council on Foreign Relations Against the U.S. Taxpayer.

Humberto Fontova
|
Posted: Mar 05, 2016 12:01 AM
Share   Tweet
The opinions expressed by columnists are their own and do not necessarily represent the views of Townhall.com. 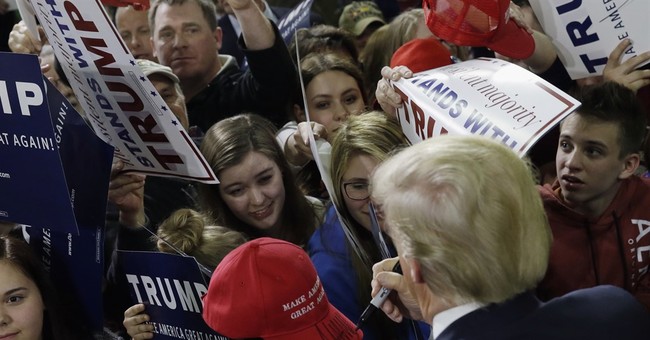 So what happened? What caused this “anti-establishment” Republican candidate to join hands on this issue with The Council on Foreign Relations, The Wall Street Journal, The New York Times, the U.S. Chamber of Commerce, The Trilateral Commission, The Davos Group, The Organization of American States, The United Nations, the Congressional Black Caucus and The Congressional Hispanic Caucus?

“Several large European investment groups have asked me to take the “Trump Magic” to Cuba,” continued Donald Trump in 1999. “They have begged me to form partnerships to build casino-hotels in Havana... we would make a fortune, they promise, and they are no doubt right…but almost every dollar would go to prop up the  police-state. Why? Because foreign investors cannot legally do business with private Cuban citizens. They can go into business only with the Castro government….I would rather take a financial hit than become a financial backer of one of the world’s most-brutal dictators…thereal cause of misery of the Cuban people is Castro's Marxist-Leninist economic system -- not the U.S. embargo.”  (Donald Trump June 25, 1999.)

Since Donald Trump’s (exploratory) campaign declarations in Miami, Florida in 1999 --where he expertly ( and characteristically) pushed the hottest buttons of one of that swing state’s most powerful voting blocs-- some things have certainly changed in Castro’s Cuba.

Repression, for instance, has CRANKED UP several notches-- especially against Christians.  The Cuban people’s desperation to risk their lives fleeing the Castroite police state has also cranked up. But Cuba’s Marxist-Leninist economic system—along with the edicts that prohibit foreigners from doing business with any Cubans outside the Castro family and close Stalinist cronies—remain firmly in place. Consequently the Castro regime—especially owning to the financial lifeline from Obama-- is as fat, happy and cocky as anytime in recent history.

So what caused Trump’s flip-flop?  What caused him to join Obama, Hillary Clinton and Bernie Sanders in wishing to abolish the absolute crown jewel of recent U.S. foreign policy?

As mentioned: what has caused this “outsider” to join hands on this issue with The Council on Foreign Relations, The Wall Street Journal, The New York Times, the U.S. Chamber of Commerce, the Congressional Black Caucus and The Congressional Hispanic Caucus?

What has caused this “rogue outsider” pledged to “shake up Washington!” to hold hands in a  Kumbaya circle on this issue with The Brookings Institute, the Carnegie Endowment for International Peace, the Farm Lobby, The United Nations, The U.S. Conference of Catholic Bishops, The World Council of Churches, The Trilateral Commission, The Davos Group, The Organization of American States and the United Nations?

What has caused Donald Trump to partner with all the above international corporations, institution and bankers against a policy (the Helms-Burton Act a.k.a. Cuban Embargo) voted upon and codified into U.S. law by the elected lawmakers of the American people?

Oh, I know, I know…you keep hearing and reading from the (typically mendacious) Democratic/Media axis along with (typically dogmatic and ignorant) libertarians that the Cuba embargo “has failed.”

In fact, the Cuba embargo has proven among the most phenomenally successful U.S. foreign policy ventures since WWII—especially at saving the U.S. taxpayer billions. This rip-roaring victory for Middle-America’s pocketbook was fully documented right here at Townhall recently.

You see, amigos: Until quite recently the so-called U.S. embargo mostly stipulated that the Castro-Family-Crime-Syndicate (called “Cuba” by the media) pay cash up front through a third–party bank for all U.S. medical and agricultural products; no Export-Import (U.S. taxpayer) financing of such sales. This cash-up-front policy has kept the U.S. taxpayer among the few taxpayers on earth spared fleecing by the Castro-Family-Crime-Syndicate (euphemized as “Cuba” by the media.)

That’s on top of the $30 billion the Putin-KGB-Crime-Syndicate (called “Russia” by the media) “wrote-off” as uncollectable Cuban debt last year.

So U.S. taxpayers, if it’s true that “political pressure” by a “powerful” and sinister cabal of Cuban-American Republican “string-pullers” maintain the so-called embargo—-then, well…you are quite welcome! Glad we could help!

“The world laughs at us!” says Donald Trump to hysterical ovations from his fans. He refers to how foreign politicians and businessmen take advantage of U.S. trade policies as enacted by “elites.”

And if it’s “greedy elites” that  cleverly craft and slyly enact foreign policy harmful to middle Americans —if so, you’ll notice that the outfits mentioned-above who’ve been clamoring to end the Cuba “embargo” (from The Trilateral Commission to the Davos Group to The Council on Foreign Relations)  aren’t exactly comprised of typical  NASCAR or Bassmaster Classic fans.