What Really Happed at the Bay of Pigs 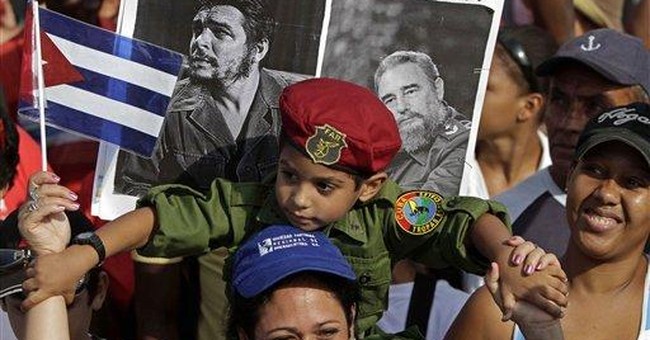 (You always hear and read of a “fiasco,” a “defeat” a “disaster” at the Bay of Pigs, 53 years ago this week. But you rarely hear about the cause. Here it is.)

"They fought like tigers," writes the CIA officer who helped train the Cubans who splashed ashore at the Bay of Pigs 53 years ago this week. "But their fight was doomed before the first man hit the beach."

That CIA man, Grayston Lynch, knew something about fighting – and about long odds. He carried scars from Omaha Beach, The Battle of the Bulge and Korea's Heartbreak Ridge. But in those battles Lynch and his band of brothers counted on the support of their Commander in Chief. At the Bay of Pigs, Grayston Lynch (an American) and his band of brothers (Cubans) learned — first in speechless shock and finally in burning rage — that their most powerful enemies were not Castro's Soviet-armed soldiers massing in nearby Santa Clara, but the Ivy League's best and brightest dithering in Washington.

Lynch trained, in his own words, "brave boys who had never before fired a shot in anger" — college students, farmers, doctors, common laborers, whites, blacks, mulattoes. They were known as La Brigada 2506, an almost precise cross-section of Cuban society of the time. The Brigada included men from every social strata and race in Cuba—from sugar cane planters to sugar cane cutters, from aristocrats to their chauffeurs. But mostly, the folks in between, as befit a nation with a larger middle class than most of Europe.

Short on battle experience, yes, but they fairly burst with what Bonaparte and George Patton valued most in a soldier: morale. No navel-gazing about "why they hate us" or the merits of "regime change" for them. They'd seen Castroism point-blank.

Their goals were crystal-clear: firing-squads silenced, families reunited, tens of thousands freed from prisons, torture chambers and concentration camps. We see it on the History Channel after our GI’s took places like Manila and Munich. In 1961 newsreels could have captured such scenes without crossing oceans. When those Cuban freedom-fighters hit the beach at the Bay of Pigs 50 years ago this week, one of every 18 Cubans suffered in Castro Gulag. Mass graves dotted the Cuban countryside, piled with hundreds who’d crumpled in front of Castro and Che Guevara’s firing squads. Most of the invaders had loved-ones among the above. Modern history records few soldiers with the burning morale of the Bay of Pigs freedom-fighters.

From the lethal fury of the attack and the horrendous casualties their troops and militia were taking, the Castro brothers and Che Guevara assumed they faced at least "20,000 invading mercenaries," as they called them. Yet it was a band of mostly civilian volunteers their Soviet armed and led-troops outnumbered 20-to-1.

“Where are the planes?” kept crackling over U.S. Navy radios two days later. “Where is our ammo? Send planes or we can’t last!” Commander Jose San Roman kept pleading to the very fleet that escorted his men to the beachhead (and sat much closer to them than the Sixth Fleet sits to the Libyan coast today). Crazed by hunger and thirst, his men had been shooting and reloading without sleep for three days. Many were hallucinating. By then many suspected they’d been abandoned by the Knights of Camelot.

That’s when Castro’s Soviet Howitzers opened up, huge 122 mm ones, four batteries’ worth. They pounded 2,000 rounds into the freedom-fighters over a four-hour period. “It sounded like the end of the world,” one said later. “Rommel’s crack Afrika Corps broke and ran under a similar bombardment,” wrote Haynes Johnson in his book, the Bay of Pigs. By that time the invaders were dazed, delirious with fatigue, thirst and hunger, too deafened by the bombardment to even hear orders. But these men were in no mood to emulate Rommel’s crack Afrika Corps by retreating. Instead they were fortified by a resolve no conquering troops could ever call upon–the burning duty to free their nation.

"If things get rough," the heartsick CIA man Grayston Lynch radioed back, "we can come in and evacuate you."

"We will NOT be evacuated!" San Roman roared back to his friend Lynch. "We came here to fight! We don't want evacuation! We want more ammo! We want PLANES! This ends here!"

Camelot’s criminal idiocy finally brought Adm. Arleigh Burke of the Joints Chief of Staff, who was receiving the battlefield pleas, to the brink of mutiny. Years before, Adm. Burke sailed thousands of miles to smash his nation's enemies at the Battle of Leyte Gulf. Now he was Chief of Naval Operations and stood aghast as new enemies were being given a sanctuary 90 miles away! The fighting admiral was livid. They say his face was beet red and his facial veins popping as he faced down his commander-in-chief that fateful night of April 18, 1961. "Mr. President, TWO planes from the Essex! (the U.S. Carrier just offshore from the beachhead)" that's all those Cuban boys need, Mr. President. Let me order...!"

When the smoke cleared and their ammo had been expended to the very last bullet, when a hundred of them lay dead and hundreds more wounded, after three days of relentless battle, barely 1,400 of them -- without air support (from the U.S. Carriers just offshore) and without a single supporting shot by naval artillery (from U.S. cruisers and destroyers poised just offshore) -- had squared off against 21,000 Castro troops, his entire air force and squadrons of Soviet tanks. The Cuban freedom-fighters inflicted over 3000 casualties on their Soviet-armed and led enemies. This feat of arms still amazes professional military men.

"We shall pay any price, bear any burden, meet any hardship, support any friend, oppose any foe, in order to assure the survival and the success of liberty!" proclaimed Lynch and Hawkin’s Commander-in-Chief just three months earlier.