The Missiles of October, the Elections of November 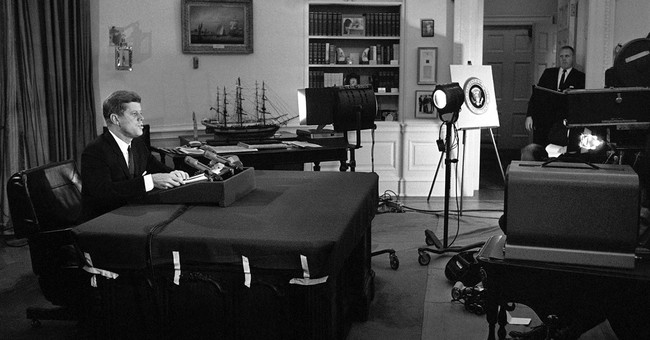 “Mr President the American people are asking with new urgency: what is going on in Cuba?” On August 31st 1962 Senator Kenneth Keating (Republican, New York) was on the Senate floor prompted by reports of a huge and rapid deployment of Soviet troops and sophisticated arms to Cuba. “The President has said he has no evidence of Soviet troops in Cuba. If he has no evidence, I am giving him evidence this afternoon. Mr President, time is short. The situation is growing worse. I urge upon my government that prompt action be taken.”

Fast-forward to October 10, 1962. “Why has such a veil been thrown around Cuba keeping this information from the American people?” asked Senator Keating. “My own sources on the Cuba situation (Cuban refugees) have substantiated this report completely that construction has begun on at least half a dozen launching sites for intermediate range tactical missiles. I call upon the appropriate government officials to confirm or deny reports of intermediate range missile bases in Cuba. Intelligence authorities MUST have advised the President and top government officials of this fact.”

Indeed: “I showed the president photos of crates which presumably would carry—or where carrying IL—Soviet medium bombers and were deck loaded on a ship which had arrived in Havana in early October,” wrote CIA director John Mc Cone on October 11, 1962. “The President requested that such information be withheld at least until after the November Congressional elections. The president requested that all future information be suppressed.”

All those missile rumors, you see, issued from “right-wing Cuban exiles.” Dozens of Cuban exiles (many of them college kids about the same age as one of JFK’s girlfriends of the time, Mimi Alford) were infiltrating Cuba and bringing out eyewitness reports of what remains the biggest military threat to the U.S. since 1812. In the process, dozens were also dying by firing squad and torture at the hands of Castro and Che Guevara's KGB-tutored secret police.

For all the good the Cubans boys did:

"Nothing but refugee rumors," sneered President Kennedy’s National Security advisor, Mc George Bundy on ABC's Issues and Answers on October 14, 1962. "Nothing in Cuba presents a threat to the United States," continued the Ivy League luminary, barely masking his scorn for these hot-headed and deceitful Cuban refugees. " There’s no likelihood that the Soviets or Cubans would try and install an offensive capability in Cuba,” he scoffed.

And for all the thanks the Cubans exiles got:

"There's fifty-odd-thousand Cuban refugees in this country," sneered President Kennedy himself the following day, "all living for the day when we go to war with Cuba. They're the ones putting out this kind of stuff."

Exactly 48 hours later, U-2 photos sat on President Kennedy’s revealing about fifty of those “refugee rumors,” studding the entire island of Cuba. Ten of the “rumors” were medium and intermediate range ballistic missiles bases, the rest were airfields for Soviet bombers and other military bases. Given the relative populations of Cuba and Iraq the Russians put more “boots on the ground” in Cuba in 1962 than we put in Iraq in 2003-04

But naturally no “scholar” ever calls it a “Soviet occupation” of Cuba. And naturally Fidel Castro and Che Guevara, who welcomed these Soviet colonizers (especially their helicopters, tanks and flamethrowers to stomp out Cuba’s rural rebels) still carry the label in all scholarly circles as “nationalists” and “anti-imperialists.”

“Our intelligence on this is very good and very hard” stressed Kennedy’s Undersecretary of State George Ball to allay the fears of Republicans scaremongers in early October 1962.

The infatuated media of the day naturally had Camelot’s back. “The U.S. has an elaborate system of surveillance by sea, by air and by land,” wrote Walter Lippmann on Oct. 10, 1962. “Little of military interest can happen without our knowing it. We do not have to guess. We know.”

Lippmann’s sagacity on Cuban matters was apparently held in high esteem within the Beltway. Three years earlier, after all, he’d asserted in the Washington Post that: "It would be a great mistake even to intimate that Castro's Cuba has any real prospect of becoming a Soviet satellite.”

And speaking of “slobbering love affairs” by the media. Only in his sweetest dreams can President Obama envision the love affair the media carried on with President Kennedy. Imagine an Obama Presidency--but with only Chris Matthews, Tom Brokaw and Jake Tapper “reporting” on TV and only Paul Krugman and Nicholas Kristof scribbling. No FoxNews. No Rush. No Mark Levin. No Glenn Beck. No internet. That’s what John F. Kennedy enjoyed.

Paradoxically, though the country was much more conservative in the early 60’s than today, National Review and Human Events were lonely and outnumbered media voices.

Much of that “very good” and “very hard” intelligence mentioned by George Ball and endorsed by Walter Lippmann had been vouchsafed to Robert Kennedy by Soviet Ambassador Anatoly Dobrynin. The setting was one of those (hush-hush, wink-wink) “back-channel” meetings for which the Soviet Ambassador and the U.S. “Attorney General” were to become famous. The “irresponsible rumor-mongering” from Republican Senators Keating (and Goldwater) about Russian Missiles in Cuba had obviously reached Premier Khrushchev’s attention, explained Dobrynin.

But he fully realized (wink-wink) that mid-term elections loomed in the U.S. So he fully expected those rascally Republicans (wink-wink), in light of their prospects and desperate to affect a reversal, to engage in politics at their sleaziest. Hence their crackpot claims of Soviet Missiles in Cuba, provided by those crackpot right-wing Cuban refugees.

Robert Kennedy assured Dobrynin that the President (wink-wink) was an old hand at this type of thing himself. He knew full-well what the Republicans were up to and saw right through their scam. But to please tell Soviet premier Khrushchev not to worry. After the November elections all would return to normal and the rascally Republican scare-mongers (wink-wink) would get their comeuppance.

In sum: eye-witness reports regarding Soviet Missiles from men dodging Soviet patrols and risking death from Soviet-armed firing squads were poo-poohed as unreliably biased. Instead, when faced with the biggest military threat the U.S. had known since 1812, the President of the U.S.-- rather than believe those insufferable “right-wing Cuban exiles” --believed assurances from a Soviet Ambassador originally appointed by Stalin.