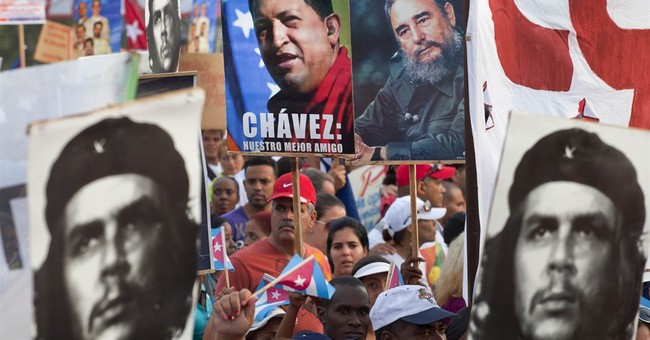 “The UK should never become a stage for inflammatory speakers who promote hate,” is how the British Home office explains its recent barring of Geller and Spencer.

Yet for the past five years (if not longer) Britain has opened her arms to visits by Che Guevara’s daughter, Aleida. Che’s daughter visits Britain to promote, in her own words: “my father’s ideals, his concerns, and his ambitions. I believe that my father is a banner to the world.” Her last visit was in September 2012 where among other “promotions of her father’s ideals” she demonstrated in front of the U.S. embassy.

In an interview with the Guardian Aleida Guevara boasted: “I want to be like Che and fight until final victory, then you feel elated. It is preferable to sink in the sea than to betray the glory that once lived!”

And what was this glory? Her father was 2nd in command of a regime that murdered more Cubans in its first three years in power than Hitler’s regime murdered Germans during in its first six, jailed and tortured political prisoners at a higher rate than Stalin during the Great Terror, and came closest of anyone in history to starting a worldwide nuclear war. In the above process of “glory” Aleida’s father helped convert a nation with a higher per-capita income than half of Europe and a huge influx of immigrants into one that repels Haitians and boasts the highest suicide rate in the Hemisphere.

Let’s have a further look at Aleida’s father’s “ideals.” And let’s keep in mind that what got Geller, Savage and Spencer banned from Britain was their purported “fostering of extremist views and hatred.”

“Hatred is the central element of our struggle!” raved Che Guevara in his 1966 Message to the Tricontinental Conference in Havana. “Hatred so violent that it propels a human being beyond his natural limitations, making him violent and cold-blooded killing machine…We reject any peaceful approach. Violence is inevitable. To establish Socialism rivers of blood must flow… These hyenas (Americans) are fit only for extermination. We must keep our hatred alive and fan it to paroxysm! The victory of Socialism is well worth millions of atomic victims!”

“My nostrils dilate while savoring the acrid odor of gunpowder and blood.” Aleida’s father had raved as early as his Motorcycle Diaries (though this passage was somehow omitted from Robert Redford’s heartwarming movie). “Crazy with fury I will stain my rifle red while slaughtering any vencido that falls in my hands! With the deaths of my enemies I prepare my being for the sacred fight and join the triumphant proletariat with a bestial howl!”

Vencido, by the way, translates into English as “defeated” or “surrendered.” And Aleida’s father made good on his boast. The “acrid odor of gunpowder and blood” rarely reached Che Guevara’s nostril from actual combat. It always came from the close-range murder of bound, gagged or blindfolded men (and boys). The Black Book of Communism, written by French scholars and published in English by Harvard University Press (neither an outpost of the vast right-wing conspiracy), estimates 16,000 firing squad executions in Cuba by the end of the 1960’s -- the equivalent, given the relative populations, of over a million executions in the U.S.

Aleida’s father delighted in delivering the coup de grace to dozens of these. When office work (signing execution warrants) tore him away from his beloved execution pits, Che slaked his blood-thirst by having a special window installed in his office so he could watch his busy and beloved firing squads at work, beaming at the spectacle.

Among Aleida Guevara’s father’s favorite pastimes was taunting his murder victim’s families. Che Guevara was famous for driving the mothers of his young murder victims to near suicidal despair. He’d often give the mothers an audience in his office. Then as they pleaded for their sons’ lives Che would often grab his telephone and bark the orders to execute her son that very night. Often the mother was privileged to hear the firing squad volley that murdered her son, many of them in their teens.

"When you saw the beaming look on Che's face as the victims were tied to the stake and blasted apart by his firing squads," said former Cuban political prisoner Roberto Martin-Perez, to this writer, "you saw there was something seriously, seriously wrong with Che Guevara."

Pamela Geller and Robert Spencer, it should be pointed out, were scheduled to speak at a London event condemning the murder of an innocent and defenseless Briton by a murderous ideologue.

Aledia Guevara speaks in London to promote a cowardly murderous ideologue, her father.

But the British government gives no indication that in the process of “promoting her father’s ideals” of glory Aleida Guevara presented the slightest offense to Britain’s “standards and values.”

Alas, when Aleida’s father finally found himself up against armed and determined enemies in Bolivia, all his bloodthirsty bluster vanished in a “poof.” “Don’t shoot!” he whimpered to his U.S.-trained Bolivian captors as he dropped his fully loaded weapons, “I’m Che! I’m worth more to you alive than dead!”

His Bolivian captors viewed the matter differently. In fact they adopted a policy of “Shoot, Shovel and Shut up.” Justice has never been better served.