Memo To The GOP 2016 Field: Speak Out When The President Won't, Especially On ISIS And Iran 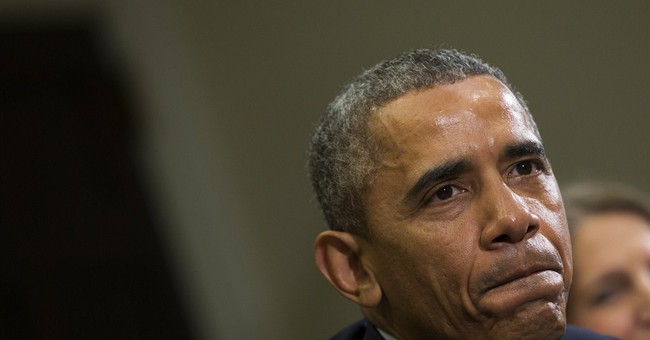 Jordan's swift reaction to the savage murder of its young fighter pilot --the rapid execution of two terrorists-- is just the first of our ally's responses if King Abdullah was correctly understood by members of the House Armed Services Committee.

The president's muted response to the latest and most gruesome ISIS atrocity outraged listeners to my radio show yesterday who are longing for more clarity and especially more seriousness from 1600 Pennsylvania Avenue. They will be even more disturbed when they learn that the president's halting comments on ISIS are far stronger than his complete appeasement of Iran, detailed in Mike Doran's must read "Obama's Secret Iran Strategy." (A companion commentary on Doran's article is Lee Smith's excellent reflection upon it from The Weekly Standard.)

This double retreat, from (1) the face and facts of ISIS barbarity and from (2) the reality of the evil nature and nuclear ambitions of the regime in Teheran, has thrown American foreign policy into more disarray than anytime since the middle of the Carter years. The president has 23 months left to wreck more havoc on America's national security and it is up to the House and Senate to do everything they an to stop him, and to focus the country's attention on the attempted appeasement of Iran and the "strategy" of "least possible force that domestic politics will allow" in Iraq and Syria. Sanctions bill after sanctions bill ought to be forthcoming from the Congress directed at Iran, as well as a demand to stop negotiations with the mullahs pending conclusion of the investigation into the assassination of the Argentinian prosecutor which has "Iran" written all over it. The next president can and should rip up any "deal" done by this feckless Administration with Teheran, but it would be better if none is ever concluded because of obstacles erected by the GOP-run Congress.

At the same time that the Congress harries the president on his quickening sprint to full frontal appeasement, the would-be GOP 2016 nominees have to make a habit of commenting in a timely fashion on national security issues while not responding to silly, press-driven controversies like the vaccine "debate" over the past few days. Scott Walker set a standard on both issues over the last week, refusing to rule out "boots on the ground" to stop ISIS if necessary, and bluntly stating that his family is vaccinated and other families should be as well. The first is a deadly serious issue about which any would-be president has to be clear and steadfast: American forces, all of them, will be used where and when necessary to protect America and her interests.

The second issue is this cycle's early version of the birth control fiasco of 2012 when liberal media elites attempt to create an issue on which Hillary can run on (and away from the disaster of her tenure at State.) Walker swatted it away. So should the other GOPers.<

Walker's steady and forthright responses over two weeks are already having an impact on an electorate hungry for a genuine leader and not for an over-managed, cautious campaigner. Every single GOPer can follow Walker's lead here, and should: Engage early and often with the media on the important issues, and cut off the silly ones quickly and with finality.

All of the GOPers --John Bolton, Jeb Bush, Ben Carson, Chris Christie, Ted Cruz, Carly Fiorina, Lindsey Graham, Bobby Jindal, John Kasich, George Pataki, Rand Paul, Mike Pence, Rick Perry, Marco Rubio, Rick Snyder, Scott Walker and whomever else there is-- should respond to events like yesterday's horror with an immediate though of course considered statement and then be available to the media to talk about national security issues.

I have looked for any such statements this morning from anyone in the GOP field and found none, which seems to me to telegraph timidity by the field, collectively afraid of repeating the perceived mistake of the Mitt Romney press conference on the morning after the Benghazi murders. Of course Romney was right at the time and proven right by the subsequent Benghazi investigations, but the Beltway Obama-Clinton protectorate of MSMers pushed back hard at Romney on 9/12/12 and this new field seems to have absorbed that lesson of not reacting to terrible events abroad for fear of being accused of partisanship. President Obama is the most partisan and secretive of presidents, and is embarked on genuinely dangerous foreign policy adventures, and needs to be called out by the people who would succeed him. That isn't partisan posturing. That's defining leadership.

Timidity on foreign affairs because of the Benghazi ambush of Romney by the press generally and Candy Crowley specifically is fighting the last political war and doing so having learned the wrong lessons. What the GOP field needs to say, again and again and again, is that "This president lost the hard-won peace in Iraq, is refusing to effectively stop the spread of the dangerous malignancy that is ISIS, and is actively engaged in rapidly losing the far more important second front in the battle with Islamist extremism, the one with Iran."

That is the simple message: Denunciation of the president's policies vis-a-vis both ISIS and Iran, a call for new and realistic defense spending, a rebuilt fleet and Marine Corps, and a promise to a return to peace through strength and the use of force where necessary, in concert with our allies when possible, allies that include our strongest ally on the planet, Israel.

Every time a crisis erupts. In every speech that touches on foreign policy. The Republicans have to establish that they will halt and reverse the Obama-Clinton "lead from behind" disastrous policy that has led to defeats in Iraq, Afghanistan, Libya, Syria and Ukraine as well as to near-constant confrontation in the South China Sea.

It isn't hard to assemble a list of key center-right media outlets to whom such statements can be pushed out to as necessary. There is almost always at least one of the major nationally syndicated talk radio shows on air and available for guest appearances, from 6 AM to 6 PM, and plenty of cable shows eager for important bookings. Hillary used Twitter yesterday to reverse herself on vaccinations but the GOP field failed to even use that instantly accessible platform to message disgust on the latest outrage from the Islamist jihadists.

Every day the ongoing international crisis with Islamist radicalism is in the news --which is close to every day-- the individuals in the GOP field must makes their views known and thus begin to define the choice the country must make in 2016: national greatness or national eclipse, and with eclipse danger. The president has put us far down the latter path. Would-be Republican nominees have to speak to their determination to reverse that course, and how they will do so.