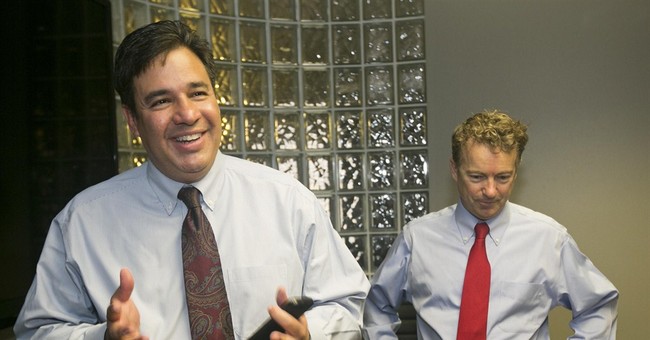 If Idaho Congressman Raul Labrador pulls off the second stunning upset in as many weeks and defeats California Congressman and current House GOP Whip Kevin McCarthy in Thursday's vote to succeed Eric Cantor as the Republican #2 behind House Speaker John Boehner, 10 consequences would flow from that upset that deserve the consideration of every man and woman voting Thursday.

1. Every member of the House GOP would be seen as responsive to their voters, even if they voted for McCarthy and not Labrador. Many of the post-upset write-ups would begin "In a sure sign that House Republicans are anxious to please their most ardent supporters, outsider Raul Labrador upset leadership favorite Kevin McCarthy in a race to succeed Eric Cantor as House Republican Leader, signaling that the majority of House GOPers are very aware that their party's grassroots are in a combative mood heading into the fall elections." Being responsive to the base is a good thing, a very good thing, and the GOP has been tone deaf on this since 2010.

2. Small donor fund raising --and the crucial information trove that comes with it-- would surge as the grassroots would begin to trust that the party was moving to reunify after a series of painful, unnecessary splits over the past 19 months. NRCC Chairman Greg Walden would dance a jig if he was selling Labrador as a fundraising headliner and not McCarthy. (Walden of course cannot say that out loud, but let's be objective about what fills rooms and what doesn't. The Bakersfield Congressman with near-zero national profile, well, that isn't a magic wand. The Puerto Rican-born son of a single mom, well, now there's a story to tell.)

3. The beginning of the end of John Boehner's speakership would be undeniable if Labrador amasses 50 votes much less wins. The Speaker may not be able to turn back a Texas Congressman Jeb Hensarling challenge in the post-election November leadership contests even if McCarthy succeeds, but if the Speaker's all-but-open choice of McCarthy is rebuffed, the gavel is passing as surely as the Majority Leader's office.

4. Congressman Labrador will be spending hours in the RNC television studios taping Spanish language ads for every member of the GOP delegation he leads. Kevin McCarthy will make the same offer to cut English ads, but a middle-aged graying California guy isn't going to get voters in swing districts like the Tucson area 2nd CD --where challenger Martha McSally could use some help wooing the Latino vote --whereas Labrador could deliver overnight and McCarthy simply can't. This means seats. Real seats. Pick-ups. A cushion for 2014. Whoever doesn't want that cushion doesn't like being in the majority.

5. When Labrador gets done cutting ads for his own chamber's members, he'd start with the scripts for the 14 or 15 GOP challengers for Senate seats presently held by Democrats, beginning with ads for House members Shelley Moore Capito running for an open seat in West Virginia, Bill Cassidy running against Mary Landrieu in Louisiana, Tom Cotton running against Bill Pryor in Arkansas, Steve Daines in Montana running against John Walsh, and Cory Gardner running against Mark Udall in Colorado. Did I mention those ads would be in both Spanish and English and could run in all media markets? Jonathan Alter's fine book The Center Holds noted that Obama outspent Romney 7 to 1 in Spanish language media. Part of the problem was lack of people to deliver to GOP message in Spanish. That was a huge problem, and the pros know it. Labrador helps fix it, overnight.

6. The prospect of a majority-endangering (in both the House and Senate) immigration bill would be dead for 2014 if Labrador became GOP Leader --but an all-but-certain bill in early 2015 as Labrador is immersed in the issue, knows its technicalities from his years as an immigration lawyer, and speaks with authority on the subject as the Puerto Rican-born son of a single mom who knows what it means to have to transition from Spanish-speaking to English-speaking in this society. Labrador would have the standing and personal testimony to move the sort of bill that 75 to 90% of the GOP caucus could agree on, a huge advantage heading into the presidential cycle. So the GOP dodges a bullet this summer and fall, and wins the issue in 2015. Because Labrador can do that. McCarthy cannot.

7. Big money donors to the party would be energized once the shock wore off. Even though "K Street Kevin" is well regarded by the deepest pockets funding the party --McCarthy works the big donors just as hard as he relentlessly avoids national conservative media-- these men and women with the big wallets know the party is struggling to project anything like a Reagan-like message of opportunity and free market energy. They like "safe" until they see the uprise of "bold." Show them "bold" and they will in near-unison be glad they helped replace one of the few GOP House members from a "safe" California district with another GOP leader with a minority background capable of reaching far beyond his district boundaries. The big donors understand optics and branding --that's how they got to be so successful as to qualify as big donors. Right now they are stunned by the Cantor defeat. Give them today and tomorrow to think marketing, and they will swing to Labrador. Which is why Boehner-McCarthy called a snap election. The donors should resent getting worked again by the House GOP elite. Time for them to tell the guys and gals with their hands out as opposed to being told what they should do. Ask John Jordan what he thinks. Go ahead. Ask.

8. McCarthy's whip operation, which hasn't been a strong suit of the party since the takeover in 2010, doesn't get further weakened by leadership changes if Labrador wins and McCarthy stays in place. McCarthy is still getting on top of the game in a new era of fewer tools. Why change him out for a newbie and expect other than another learning curve and another series of pratfalls? Why waste the hard-earned lessons?

9. With Iraq melting down into butchery, Syria a hell-hole, Israel threatened, Russia resurgent and the PRC belligerent, the new Majority Leader is instantly going to have to answer scores of questions about foreign affairs. A "new new" guy will get more slack cut him by the MSM and the opportunity to name a "senior statesman cabinet" to help him will be real. McCarthy gets no similar period of grace --he is already in leadership. He should already know the answers. Does he? If McCarthy stumbles out of the gate on Iraq, Iran, Russia, the PRC, it will be like Sarah Palin's early errors when she had no time to recover because a nominee is expected to know. Labrador has more of a grace period and is very smart and will study himself to competence quickly.

10. Labrador's elevation would instantly kill off the re-emergence of the extreme anti-illegal immigration sliver of the GOP. This sliver isn't very big, but it is very loud, and its potential for doing damage to the GOP is enormous, especially in places like Colorado where Tom Tancredo, who left the GOP in 2010, wants back in as its nominee for governor in 2014 and threatens to take the plurality vote on the fuel of the extreme anti-illegal immigration rhetoric. Tancredo at the top of the ticket in the Rocky Mountain State could well doom Cory Gardner's excellent chances of defeating Democrat Mark Udall, because Tancredo can say the wildest, most irresponsible things at the drop of the hat. Tancredo could in fact threaten Republicans across the country and House GOPers should be aware of that as they vote Thursday. The appearance of ignoring the immigration issue in Cantor's defeat by voting for McCarthy --a crucial part of the anti-Cantor coalition-- would add fuel to Tancredo's bonfire of his personal vanities. For this reason alone GOP members frustrated by not having their bills taken up by the Senate should vote for Labrador. He greatly increases the chances of a GOP takeover of the Senate. To repeat: A vote for Labrador for Leader greatly increases the prospects of a unified GOP Congress to face down President Obama in 2015-2016 and set-up the GOP nominee for the showdown with Hillary.

This is how Members have to look at this Thursday's vote: What is in the best interests of the country?

I don't know anyone who does't like Kevin McCarthy. But what does he add, right now, to the prospects of the GOP win we so desperately need in November? Truth be told: Nothing. Nothing at all. In fact, he subtracts. He subtracts energy. He subtracts perceived responsiveness. He subtracts the likelihood of a Speakership transition to a new generation of GOP leadership.

McCarthy also adds risk. He adds the tag of K-Street cronyism. I invited McCarthy on my radio show Friday to answer these questions and make his pitch. I was given the assurance he'd be there. He didn't show. Raul Labrador did. A very small footnote. But a telling one. The willingness to engage with the base via the talkers is something Boehner-Cantor-McCarthy have simply refused to do. To the detriment of the party they are supposed to lead.

The loss of Eric Cantor was a huge blow to the GOP, but one it collectively courted by indifference to the base of the party.

When John Boehner mocked the GOP caucus n immigration on April 24th, Boehner was sufficiently close to his own Ohio primary against a weak challenger on May 7 (with absentees having been cast since April 2) to risk nothing for himself and everything for Cantor. With that mocking set of gibes, Boehner ran his own #2 over in the driveway, and then actually cried at the funeral. Like O.J.promising to find the killer. There will be a few payback anti-McCarthy votes as a result in the pile on Thursday, knowing that every Labrador vote is an anti-Boehner vote.

But the real motive should not be weakening Boehner any more than it should be voting for McCarthy in order to increase on'e own personal position in the House GOP hierarchy. The North Star should be the country's best interest. McCarthy is an ok whip and getting better. He's not the ideas guy. He's not the speechmaker. Labrador is much better at both but he isn't the best the GOP caucus has to offer. But for the ten reasons offered, he is a better choice than McCarthy.

The big three of the conservative's near future in the House are Jeb Hensarling, Paul Ryan, and Tom Price, and one of them needs to seize the Speakership in November --for the good of the country. Thursday's vote is part of that process, and it is most definitely not personal. Its just business. The business of saving the country by saving the GOP from its own worst instincts. Call your Member. Tell them to vote Labrador.