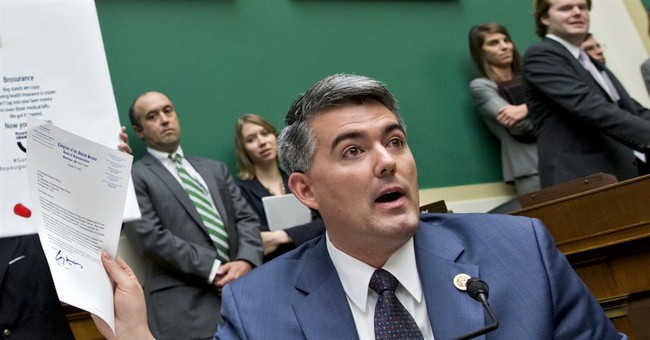 The GOP's probability of taking over the United States Senate increased dramatically Wednesday with the entry of Rep. Cory Gardner into the race against incumbent Obamacare enthusiast Senator Mark Udall in Colorado.

Not one GOP seat is in danger of turning blue, despite all the yammering from Democrats about Kentucky and Georgia, where Mitch McConnell will coast and will Rep. Jack Kingston will emerge from a crowded Senate primary to win handily in the fall.

The biggest loser because of this move --other than Udall who is as tightly bound to Obamacare as President Obama himself-- is Arkansas Senator Mark Pryor, whose already sinking campaign is going to quickly find itself on the wrong side of the triage tent as Democratic strategists and donors realize that Re. Tom Cotton is unbeatable in the Razorback state.

Here's the list of Democratic seats which Republicans are positioned to take, from the mortal locks at the top down to the biggest but still possible reach at the bottom:

Jay Rockefeller quit after Capito got into the race. She will win, going away.

This is a mortal lock for the popular Rounds.

Pryor won his seat because his dad held it for years. Now the combat veteran of Afghanistan and Iraq Tom Cotton has a lead and is building it day by day, as shrinking Pryor struggles to erase all his positive endorsements of Obamacare. Most recently he was for repealing the cuts to career military COLAs after he was for them.

4. North Carolina: A businessman and former Speaker of the North Carolina House Thom Tillis is already ahead of another Obamacare booster, Denocratic incumbent Kay Hagan.

5. Michigan: Former Lt. Governor Terri Lynne Land is contesting an open seat left so by ancient Carl Levin, who has designated a no name with a propensity to disappear even more from voters' minds. Land is running on the same ticket with popular GOP governor Rick Snyder, and has established an early lead.

6. Virginia: Ed Gillespie is running against a popular former governor-turned-senator Mark Warner, in a purple state, but Warner is tightly tied to both Obamacare and the new governor Terry McAullife, and Gillespie is a pro's pro with terrific fundraising ability and genuine and deep roots in the Commonwealth.

7. Alaska: Either Mead Tradwell or Dan Sullivan will beat Mark Begich, who only won the seat six years ago because a corrupt Department of Justice prosecution of Ted Stevens hounded the late Stevens from office. Begich provided the crucial 60th vote for Obamacare, and Alaskans won't forget.

8. Montana: Rep. Steve Daines must unseat the recently appointed John Walsh, who was gifted his seat when clueless Max ("Obamacare is a train wreck") Baucus was exiled to China in an obvious attempt to hang on to the seat.

9. Colorado: Rep. Gardner is young, charismatic and an experienced veteran of Rocky Mountain State politics who spent years on the U.S. Senate staff of Wayne Allard, a stint in the Colorado legislature, and checked both big boxes --as a CSU undergrad and CU law grad. Mark Udall is Narack Obama in a badly fitting cowboy hat.

10. Louisiana: Rep. Bill Cassidy is in a dead heat with long-time hanger on Mary Landrieu, and will have to go through the "jungle primary" before facing Landrieu head-on a few weeks later. If, as expected, the Republicans already control the incoming majority, he will win in a romp. If the Senate hangs in the balance, more money will flow into the Lousiana race than has ever been seen there before.

11. Minnesota: Mike McFadden is a self-funding successful businessman who has an uphill but doable battle with comedian Al Franken, who along with Bernie Sanders and Barbara Boxer, define the left edge of the United States Senate. If Gopher State voters get tired of being the butto jokes because of Franken, McFadden can win here.

12. Iowa: This is an open seat, but with popular Republican governor Terry Branstad running for an easy re-election, if the GOP nominates the right candidate from among many contenders, he or she could win in November against an off-the-shelf-left-wing Democrat, blah blah blah Bruce Braley.

13. Oregon: Dr. Monica Wehby is a pediatric neurosugeon --exactly the sort of person Obamacrae booster incumbent Jeff Merkely didn't want to face but will in November.

14. New Hampshire: Democrat Jeanne Shaheen is praying Scott Brown doesn't get into the race, but the former Massachusetts senator has been a second-home resident of the Granite State for decades and may take the plunge. If he does --or if columnist-to-the-world Mark Steyn dives in-- Shaheen who delivered Obamacare and all its misery to New Hampshire, will be in deep trouble.

There's the list that makes Harry Reid twitch. How wonderful it will be to see him live with the rules he has enacted, all the precedents he has dashed, all the abuses he brought about. Cory Gardner made a lot of people happy yesterday, but not nearly as happy as November will make them.