What Would The GOP Do With A House-Senate Majority In 2015? 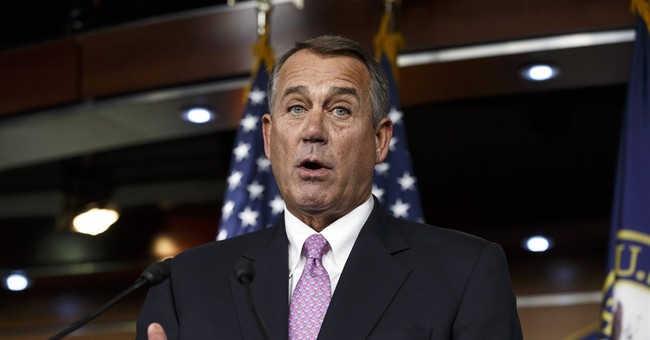 Everything begins with leadership. That's why Cleveland Browns owner Jimmy Haslam took out the ax yesterday. He wants to win. He wasn't winning. He wasn't going to win. So he changed up the leadership.

That's what every failing franchise and business in America usually does, rather than re-committing to failure. They make tough choices and changes. Good To Great and all that jazz. Cliched, yes, but true. "If everybody says you're drunk, you'd better sit down," says the old Irish saying. Everybody says the House GOP is staggering. It had better sit down and at least think about what victory in November would mean if the same chronic dysfunction in the House GOP Caucus continues.

The leadership team-in-waiting in the Senate is secure and very capable. Kentucky's Mitch McConnell, Texas' John Cornyn, and South Dakota's John Thune are all smart, principled, experienced and crucially, strategic thinkers. If the country is so disgusted with Obamacare and the feckless president it is named for as to give McConnell a couple of extra seats behind the six he needs for a simple majority, McConnell and the Senate team will be a constructive partner with whomever is running the GOP House.

That's the big problem though. No one seems capable of running the House GOP caucus. It is leaderless, rudderless and even when partnered with a GOP Senate majority, almost guaranteed to be as dysfunctional then as it is now.

Don't blame the rank-and-file members, and don't fall in with Representative Peter King and start bashing everyone with whom you disagree in personal terms. The problem is that the Speaker, Majority Leader Eric Cantor and House GOP Whip Kevin McCarthy are simply terrible leaders even though they are prodigious fundraisers and good friends to the vast majority of their caucus. Nice guys, everyone of them. Terrific in fact. And we know what happens to nice guys when they go up against Democrats.

Imagine next year with a Senate Majority Leader McConnell and a House Speaker Boehner/Cantor. What would be the agenda?

McConnell could and I hope does immediately bring an end to all judicial confirmation proceedings --at every level-- for the next two years as a means to put a big period at the end of a tortured quarter-century of judicial confirmation nightmares which began with the nomination of Judge Bork in 1987. The low point came with Harry Reid's trashing of 200 years of Senate practice by ending the power of the minority last year. A two-year time-out during which the Senate can agree on rules that will apply post-2016 is an agenda item that the Senate GOP could do on its own. The Senate is also its own master on all other nominations, and the big dog on foreign policy disputes with the president.

The Senate and the House could also continue to hold oversight hearings, though the record of the House in this regard is not encouraging. Perhaps only one hearing made a dent in public opinion since this session began more than a year ago --the Benghazi hearing chaired by Darrell Issa and featuring Mr. Gregory Hicks, Deputy Chief of Mission at the U.S. Embassy in Tripoli. One of the many failures of the House leadership since November, 2010 has been its inability to figure out how to harness oversight authority into compelling narrative that shapes new and old media alike and transforms public opinion in the process.

Even if the House GOP leadership suddenly got a clue on how to actually move public opinion via hearings, could it also move any kind of legislation along a path of an agreed-upon strategy with the new GOP Senate majority? That grand strategy could either be to move incremental reforms in various areas --like the Clinton welfare reform compromise of mid-1996, perhaps in the area of immigration-- or to negotiate a "grand compromise" that might actually work out long term entitlement and tax reform between a legacy-eager president, incoming Ways and Means Chair Paul Ryan and whomever would be chairing the Senate Finance Committee. (It is currently Orrin Hatch but I don't know if he keeps the seat in 2015.)

One strategy would be complete confrontation, but not a wise one. Those hungry for brinksmanship should know now that shutdowns in 2015 will be what Hillary is hoping for, and while the drama of a shutdown could much easier to manage with a majority of both houses, still the president holds an institutional upper-hand in such show-downs, and all eyes will be on 2016 as soon as the polls close this November. (For the latest on what the would-be presidents are up to, see Jen Rubin's column today.)

The point is, the Congressional GOP will need a strategy for 2015-2016, and they will need it long before the November post-election organizing meetings. Yes, new members will be arriving in scores due to retirements and upsets, and no one can pledge the next Congress to an agenda drafted by this one.

But the House GOP and the key GOP Senators need to begin now to plan the agenda for next year, or fiascos like yesterday's will be the rule and not the exception. Framed and floated policy proposals need to be provided to the public not just to encourage turnout but also to avoid huge missteps like the cut to the COLA of the career military. (Example: Far too many Manhattan-Beltway big thinkers want to get rid of the mortgage interest tax deduction and the charitable contribution tax deduction, underpinnings of the tax returns of their core supporters on Main Street. Terrible ideas, both of them, but a cloistered Congressional Party will embrace them and be surprised when their supporters back home scream at them just as they did on the military COLA. Many bad ideas could be avoided by listening. Many good ideas could be similarly identified. The ossification of the Congressional imagination is pretty far advanced even with people like Arthur Brooks, Bill Kristol, Yuval Levin and Pete Wehner roaming the halls and working the phones on policy issues. The House GOP needs to force feed input into its caucus.)

The best ideas even when combined with a solid majority won't matter a bit unless the House gets leadership from its top down. Most people expect the Speaker to give up the gavel willingly in November or to have it taken from him in the sort of fight that will cripple the new session before it begins. So hope for a new Speaker with a vision. That could be Eric Cantor, or Jeb Hensarling or Tom Price, but whomever it turns out to be, they need to be ready to lay out in detail what the next 15 months would look like and to act not as this Congress has --episodically and from lurch to lurch-- but in accordance with a plan.

What a concept: A plan, articulated early and in public, debated, amended and bought into by a majority of the majority in private, and vigorously pursued on every platform using every tool of persuasion. That's what the GOP needs, and what it very much lacks right now.

A Cantor-Cronyn Committee to explore post-November plans would be a very good thing to have set up right now to start thinking between the #2's staffs on what 2015 might look like. Every successful big turnaround takes planning, not an avalanche of ad hoc improvisations. The time to start is now. Indeed, the time to select the next speaker is already on us and if it is going to be Eric Cantor, he should step up with a plan to get to a plan as opposed to another six months of drifting along and hoping the collapse of Obamacare may save the GOP. It might in November, but the undoing would be rapid and complete if a new majority acted next year as the current House majority did this week.

Speaker Boehner would help the GOP make this transition to coherence by announcing his plans for next year now. That would be leadership.