The Pressing Need for a Special Prosecutor 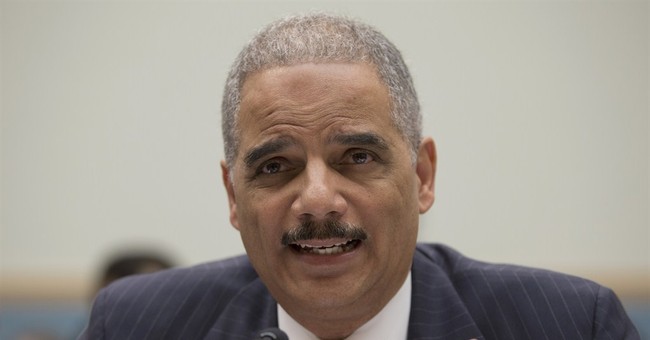 Wednesday's appearance by the Internal Revenue Service's Lois Lerner coupled with the burgeoning scandal's reach into the White House --see this post by Townhall's Carol Platt Liebau--underscores the pressing need for the appointment by the Attorney General of a special prosecutor with wide ranging and independent authority to investigate the wrongdoing connected with the targeting of Tea Party and religiously-motivated tax-exempt groups by the IRS.

More on "targetgate" will appear soon at National Review Online by Eliana Johnson and other members of the NRO team that will confirm what a string of center-left and MSM commentators --Bloomberg's Jonathan Alter and Al Hunt and the New York Times' Michael Shear-- have said on my radio show the past three days: The scandals are outrageous and the need for a special prosecutor is urgent.

Some of the journalists on the left have as their concern the salvaging of the Obama presidency before it enters into what would quickly become the longest second term in history, a prolonged drip, drip, drip of revelations and paralysis. They wish to spare the president the relentless grinding down of his office and thus of the country's ability to respond to crisis at home and abroad.

From 1986 to 1989 I was the General Counsel and then Deputy Director of the U.S. Office of Personnel Management. I was a young GC --only 30-- but was lucky to supervise a staff of 30 superb lawyers, all career professionals, who knew and did their often complex jobs with great skill and diligence. In the latter job I was the COO of an agency of 6,000 federal employees whose duties including the hiring, firing, retirement and health care of the nation's 2 million plus federal civilian workers. The vast, vast majority of these civil servants were hard-working and very competent professionals. In my previous lawyer staff jobs as a Special Assistant to the Attorney General and in the White House Counsel's Office I had worked primarily with political appointees, but the career staffs in both place --smaller in the Executive Office of the President, very large at Justice-- were of the same character and competence as those at OPM.

I bring up this experience so the reader knows I really do have a basis for believing the vast majority of IRS employees are honest, hard-working and very, very fair, and I base that assessment on having spent years inside the federal government.

Since leaving the feds I have spent a quarter century, from 1989 to right through this morning, helping private sector law clients negotiate the complicated laws administered by the U.S. Fish & Wildlife Service, the U.S. Army Corps of Engineers, the Environmental Protection Agency and the Consumer Product Safety Commission, as well as dozens of state and local agencies. As with almost every other administrative lawyer I know, my experience has been that the vast, vast majority of government regulators and their government lawyers are competent, ethical men and women of character. We often disagree on how a statute or regulation should be applied or how a permit or proceeding should progress, but 95%+ of these government employees do their jobs with pure professionalism and without any animus towards, and often with the desire to assist, the regulated community. They don't pass the awful laws that pour out of the dysfunctional Congress or press the expansive regulatory agendas pursued by their political appointee leadership, but they are obliged by the Constitution and their oaths to execute those laws and agendas as best they can, and almost always they try to do so in good faith.

Political appointees often capture and pervert their efforts, or issue edicts that are beyond what Congress intended, and occasionally an ideologue within the career ranks will take an agency off the lawful path, but the career folks are nearly always straight shooters.

A special prosecutor is necessary not only to do justice to the injured --and there are hundreds of injured groups with tens of thousands of members-- but also because the rapidly widening scandal at the IRS (and associated scandals involving the DOJ's snooping of journalists and the cover-up of the terrible events in Benghazi) is going to tarnish, damage and quite possibly ruin the lives and careers of many innocent, dedicated federal employees if it isn't quickly and thoroughly investigated and, where appropriate, prosecuted. The pall over the various agencies is already large and rapidly spreading. It has to be ended and the only way to end it is to appoint a special prosecutor and let him or her have at the sandals, having been charged to do so with thoroughness and urgency.

This was Al Hunt's position in an interview I conducted yesterday and it ought to be the position of anyone with a friend, family member or even a professional acquaintance within the impacted agencies, and it ought also to be the demand of every taxpayer who does not want the government they pay for to grind to a halt across large swaths of the bureaucracy doing the daily work of those agencies. Foley & Lardner's Cleta Mitchell --among the Beltway's best tax exempt organizations lawyers-- said on my program yesterday that many of her clients are still waiting for their IRS rulings, applied for years ago. These are citizen-customers who deserve prompt, right responses from the IRS, and there are legions of similarly situated citizen-customers whose work is piling up undone as scandal mode sweeps through the federal alphabet agencies and the innocent dive for cover.

The Independent Counsel statute was a lousy law and no serious analyst --none-- is calling for its revival.

But special prosecutors can accomplish their ends though the abuse of their charges is also possible. The answer to the potential for abuse isn't in carefully crafted charters but rather in the selection of an experienced prosecutor of great integrity and who enjoys bipartisan respect. There are such men and women in great numbers. Selecting a respected former United States Attorney from the Bush era in informal consultation with senior congressional leaders would work, would not be difficult to effect, and that individual's work could begin expeditiously.

No one --not the serious pundits on the left, not the Congressional committees, and most importantly not the public-- trusts Attorney General Eric Holder or his political appointees at Justice to do this job. (Al Hunt is among the growing number of liberal commentators who want Holder gone completely, and Congressional Democrats in both the House and Senate facing tough re-elections are joining their number, fully aware what 18 months of investigations will do to their campaigns.)

The job of investigation and possibly prosecution of the IRS and Treasury officials responsible for this miscarriage simply has to be done, and it has to be done soon. By a man or woman in whom the public can repose trust.