Memo for: Team Romney - Subject: The Candidates and Talk Radio 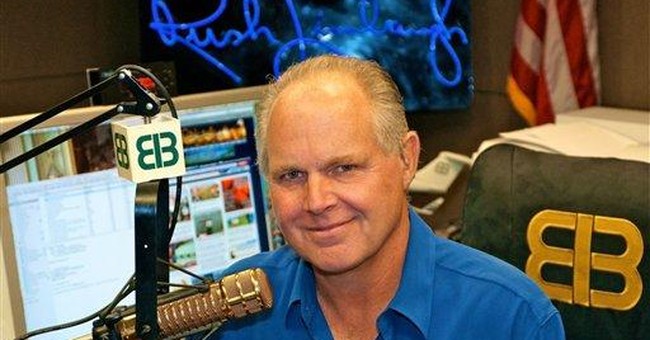 This is a long memo, born of two decades of frustration with the Beltway sharpies who run campaigns and are clueless about talk radio. There is no hostility here, just frustration with the invincible ignorance of the consulting class that wouldn't know the difference between a Thursday afternoon drive show in Denver and a late night dollar-a-holler stick in Flat Plains, Nowhere.

By way of background, I began my talk radio career in 1990. In the 22 years since, I have covered six presidential races. Before that I watched two presidential races from within the Reagan Administration, and one from the office across the walkway from Richard Nixon's in San Clemente and NYC.

I'm no Bob Shrum, thank God, but I know a couple of things about radio and running for president.

Here are some undeniable facts.

Each of those states have between one and six major media markets, and each of those markets have at least one and usually three "talkers." Those markets are --from south to north and then east to west-- Miami, Orlando, Jacksonville, Tampa Bay, Charlotte, Washington, D.C., Richmond, Norfolk/Virginia Beach, Philly, Pittsburgh, Boston and Manchester, Cleveland, Columbus, and Cinncy, Detroit, Milwaukee, Des Moines, Denver and Colorado Springs, Albuquerque, Las Vegas and Reno.

There are just nine radio talk show hosts who broadcast in all or most of those markets every day for three hours each day and whose shows Mitt Romney and Paul Ryan will find engaged but serious hosts who won’t pull stunts or create embarrassing moments for ratings.

There are plenty of other fine hosts, some with big audiences in a particular city, like Mike Rosen in Denver. Rosen dominates Denver radio, as others do other cities.

There are also hosts who have hit standing in the specifically Christian community, as with Janet Mefferd nationally and Frank Pastore in southern California.

But for sheer impact on center-right political listeners --those listeners who vote, contribute, volunteer, and, crucially, influence others-- the nine above are the key.

There are other great hosts, like Lars Larson, but if you are talking audience size in the major markets in the swing states, these are the nine.

(These are not the nine you see listed in Talkers Magazine as the top nine in annual "Heavy Hundred." We in the industry know that list to be an advertising vehicle for Talkers, which to serve its purpose for its owner must necessarily blur the lines about audience and influence. I hope your radio team understands that. Some operatives do not and carry that list around as though it has some relation to audience size. It doesn't. )

The nine above make the national radio weather for center-right voters. The lefties might call us the Nazgul, and those on the right the Fellowship, but in simple terms, we drive the messages, and we do so in a way unique in all of American media.

But when it comes down to selling books, we nine are besieged by publishers. The books that pile up in our studios can (and have) stocked many a thrift shop shelves. Authors and publishers know the talk radio audience buys books. This is why Ken Follett spent three hours in my studio, why Justcie Breyer came by, why I have annual chats with Vince Flynn and Daniel Silva, and why reporters for every major newspaper send round their books when they write them. Our audiences are highly informed, very curious consumers of ideas. They buy books.

Except publishers know how to use national talk radio and I have never seen a presidential campaign yet that knew how to use the medium.

First and foremost, in terms of sheer efficiency, putting Governor Romneyor Chairman Ryan on any of these nine shows means that they are talking to hundreds of thousands (and in Rush's and Sean's case, millions) of their most likely supporters, and not just those supporters, but through them their families, friends and co-workers.

Most of these shows also make their audio available so the multiplier impact on social media is enormous.

And, if asked by the candidate, many in those audiences will contribute or volunteer.

Now each of these shows is actually 6 shows a day--six different half hour shows as the audience is constantly changing in and out. The “average time spent listening” varies between shows --mine is quite high at 23 minutes last time I looked-- as this number usually reflects commuting time. The lesson is that your candidate has to appear frequently on each show to assure yourself of connecting with the entirety of each show's audience.

Reminder: That audience that includes every major market in every swing state.

It is true that some talk radio junkies listen to many shows, but most have a few favorites and many listen only to one or two. And many people only listen once or twice a week.

Thus to reach your core voter, contributor, volunteer and influencer, you have to do every show at least six times, once a half hour for each hour they air on each day they air. That of course won't really do it because people listen on different days depending on when they are out and about, dropping off kids at Thursday's water polo practice or making the weekly commute to the sales meeting in downtown, but it is a good start.

If you set out to reach most voters, contributors, volunteers and influencers in this very important world of radio talk shows airing in the key swing states, you'd lay out a spread sheet in from of your candidates that showed the ten weeks to the election and the roughly 6 appearance minimum you need them to make on each of the shows. If you really got this, you’d try and hit every show segment on every day of the week, so those 6 appearances would become 30 per show, or a total of 270 talk radio dates between now and November.

“25 interviews a week,” says the scheduler. “Impossible! We have to have rallies and meet-and-greets and fundraiser time!”

Of course it isn't impossible. It is about an hour a day of talk radio interviews a day, maybe 90 minutes if you are looking to add a hit or two with a local host every day. Each one of those interviews has an audience that dwarfs the largest rally.

Before you say "No way," ask yourself what it would cost to air ten minutes of ads in each of those key swing state markets? (Not to mention all of the non-swing state markets --hundreds and hundreds of them that produce volunteers and contributors and folks who will call their parents and friends in swing states if asked.)

Now look at that cost and ask yourself if all that time spent dialing for dollars is a little poorly used when you could be selling yourself and your ideas for free and raising money and identifying volunteers at the same time?

Now there are some shortcuts. Some hosts, me included, replay interviews with Governor Romney when they occur twice in the same day. And strategically placed interviews can cover a lot of the audience turning over. Longer interviews work wonderfully well in this regard.

There are risks. Answers can be flat or poorly worded, but both the governor and the chairman are very, very good in the long form, and "gotcha" questions are few and far between when you get outside of the MSM and avoid the pots-and-pan bangers like John and Ken in LA.

So, if you really intend to wage a campaign of ideas, you need those ideas to be laid out in appropriate detail, with the time necessary to review the crisis the country faces, and without slick editing to misrepresent your meaning. You also need to ask every single potential voter, volunteer, contributor and influencer to do their part.

In short, you have a great opportunity, but it takes discipline and it takes time. Your candidates need to do it, not surrogates, though surrogates can help amplify and extend, especially in those smaller markets.

And if you don’t have a spreadsheet listing every key host –national and local—with each appearance made by Governor Romney or Chairman Ryan, then you are not doing your job.