PBIP: The Approach and Outbreak of Polar Bear-Induced Paralysis 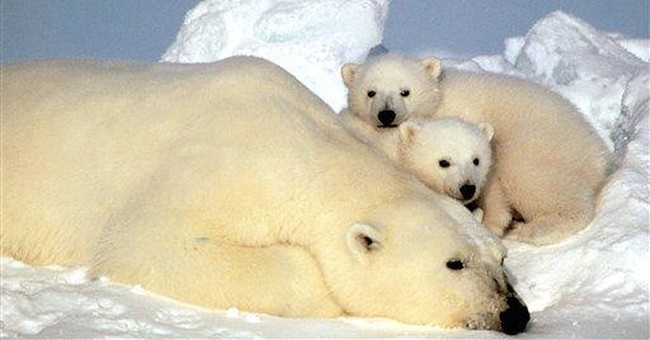 In January of 2007, the U.S. Fish & Wildlife Service published a proposed rule in the Federal Register intending to notify the public and seek their comments on the idea of adding the polar bear to the list of threatened and endangered species.

A raft of comments came in, and the government's biologists went off to consider them.

The Service returned to the Federal Register a second time, in October of 2007, and requested more comments. The window closed again.

More than 670,000 comments have been received urging that the polar bear be listed as a "threatened species."

Ask yourself why there was such an outpouring of comments for such an obscure issue.

A variety of environmental groups orchestrated the tsunami of testimonials to the desperate condition of the polar bear because they understand—as much of the public and Congress does not—that a listing of the polar bear will have vast implications, and may in fact be a backdoor to implementation of the Kyoto protocol.

By way of background, I have practiced natural resources law since I left the Reagan Administration in early 1989. Wetlands, jurisdictional waters, and endangered species are my areas of expertise, and if you ever need a lesson on the Stephens' kangaroo rat, the Delhi sands flower-loving fly, the California gnat catcher, the Desert tortoise or any of a couple dozen other plants and animals throughout the west that are protected under the federal or state Endangered Species Act, drop me an e-mail.

All of those species and many more have fairly predictable aftermaths of their listing --a period of great confusion about where they live and breed, what can and cannot be done near them, and lots of meetings and negotiations with federal officials over habitat conservation plans, Section 7 consultations etc. There are lots of landowners and businesses that lose a lot because of this law, but in the past, the impact zone of a listing was at least limited to the area in which the listed species lived.

That won't be the case with any listing of the polar bear, which is why it is the focus of so much zeal among the groups. The reach of the listing wil be immense because of the rationale offered for its protection.

The proposed listing states that the polar bear may be threatened because it is losing the ice it needs to live on due to climate change. If the government agrees with the models that project a dramatic loss of Arctic sea ice over the next few decades, and further agrees that this loss would imperil the polar bear's survivability, the bear gets listed.

Once listed, the Federal Endangered Species Act is very clear: Any federal action that might impact the polar bear must be reviewed by the U.S. Fish &Wildlife Service under Section 7 of the Act.

What sort of federal actions? The most obvious would be any activity on or near Arctic ice, but that's not the gold ring the environmentalists are reaching for.

They will argue that every federal permit that allows directly or indirectly for increased emissions of hydrocarbons is a federal act that might impact the polar bear --every port expansion, every refinery opening or repair, every Army Corps of Engineers permit that allows for more homes or office buildings to rise.

Don't believe me. Believe the Center for Biological Diversity, one of the plaintiffs in the suit filed to force the listing. From the Center's website:

“Protection under the Endangered Species Act will provide concrete help to polar bears and could revolutionize American climate policy. Since U.S. resistance to curbing greenhouse gases has allowed other countries to shirk their responsibilities as well, major changes in American policy are likely to have a powerful domino effect, catalyzing change in climate policy worldwide. The polar bear’s protected status will require a new level of environmental review before oil and gas development continue in polar bear habitat in the American Arctic. Even more critically, because it is illegal to harm threatened species or jeopardize their survival, the polar bear listing could mean that all U.S. industries emitting large quantities of greenhouse gases — and requiring a federal permit to do so — will come under the purview of the Endangered Species Act. From polluting power plants in the Midwest to auto manufacturers, a vast array of industries may have to clean up their acts to give the polar bear a chance to survive.”

They will do more than argue that a listing has these impacts. Once listed, the polar bear will launch a thousand law suits as the groups search for judges and opportunities to assert that hydrocarbon emission reduction must be apart of every federal permit and that those reductions must be negotiated by and approved by the already understaffed and overwhelmed U.S. Fish & Wildlife Service. The advocates of the listing know the stakes, which is why they have filed suit in federal district court in the Northern District of California to force a decision. That's why California Senator Barbara Boxer is demanding that the Secretary of the Interior act.

What is amazing is that industry seems almost wholly unaware of this debate. I e-mailed a senior vice president of a major coal company asking what he thought about the controversy, and he sent me back a polite, straightforward reply that he didn't think it would affect his industry much.

The groups have achieved strategic surprise.

If the industries wake up any time soon, they will have to move to intervene in the lawsuit filed to require the listing decision be made, and to demand a reopening of the record in order to make sure that this year's temperature and ice data are included, and that the models relied on to predict ice loss through mid-century be examined against this year's data. They will also have to begin to mount the obvious due process challenges to a scheme to radically extend the reach of a 1973 law that was never intended to work this way but which has grown steadily via a series of aggressive judicial interpretations. There are other Constitutional and Administrative Procedures Act challenges as well, which should be lodged in the District of Columbia Circuit, not in the Ninth Circuit.

And Secretary Kempthorne should resist the pressure from the left to rush to a listing decision. Too few people knew this has happened, and too much is at stake on a too little-reviewed or understood set of facts.

"As a result of [global] warming, Arctic sea ice is melting very rapidly," plaintiffs argue in their suit. They continue:

"In 2007 the Arctic sea ice hit a new record minimum, fully one million square miles below the average minimum sea ice extent between 1979-2000. There was less ice in the Arctic in September, 2007 than more than half of the world's leading climate models project for 2050. Some scientists now say summer ice could disappear entirely as early as 2012.

Polar bears cannot survive the loss of their sea-habitat."

Plaintiffs are making arguments about the approach of catastrophe and the Court does not have before it any challenge either to the assertions about the models or the appropriateness of using the ESA to impose Kyoto on an unpersuaded country.