Surveys Show Many Support Climate Action, But Only If It’s Really Cheap

H. Sterling Burnett  |  Oct 03, 2019
The opinions expressed by columnists are their own and do not necessarily represent the views of Townhall.com.
Top Columns
Trending on Townhall Media

Despite all the hype surrounding Greta Thunberg and other youths indoctrinated with “climate crisis” propaganda who appeared before Congress in mid-September, public opinion surveys continue to show people’s concerns about catastrophic climate change are a mile wide and an inch deep.

The results of a new Washington Post/Kaiser Family Foundation (Post/Kaiser) survey correspond with other similar polls from recent years. Public opinion polls, including the Post/Kaiser poll, which includes the views of kids as young as 13, show a majority of those surveyed, whether representing the general public at large, registered voters, or most other sub-segments of the population, are “moderately,” “very,” or “extremely” worried or concerned about climate change.

Yet the real story lies in what the headlines ignore. If you ask the public about almost any public policy issue frequently in the headlines —clean air, crime, economic growth, education, immigration, jobs, retirement, taxes, terrorism, and so forth— poll respondents will say it is important. What we really need to know, however, is how important each issue is relative to other matters of concern. In a world of limited resources, government must focus on what the public is most concerned about.

In poll after poll, climate change consistently ranks at or near the bottom on the public’s list of concerns. For instance, a United Nations poll surveying more than seven million respondents from 195 countries asked participants to rank their top 16 priorities. A quality education ranked first, and “Action Taken on Climate Change” ranked dead last, receiving 300,000 fewer votes than “Access to Telephone and Internet,” which finished 15th on the list.

The results of the Post/Kaiser poll are no different. Survey participants were asked, “How important are the following issues to you personally?: climate change, the economy, gun policy, health care, immigration, and renewable energy.” All came in as important, yet climate change came in second to last among adults and third to last among teens in the number of people rating it as either “extremely” or “very” important. Had the Post/Kaiser pollsters added education, crime, school safety, reliable power supply, or a host of other issues commonly asked about in such surveys, I’m quite certain climate change would have ranked even lower than it did.

What’s even more telling is that two other surveys, a 2017 University of Chicago and Associated Press-NORC Center for Public Affairs research poll and a 2015 survey conducted by The New York Times, Stanford University, and Resources for the Future found, along with the Post/Kaiser poll, that the public only wants to fight climate change if it can be done at very little or no cost. Even I was surprised by how little money people were willing to spend to save the planet from a so-called “climate crisis.”

Sixty percent of Post/Kaiser survey respondents said they believed the world had fewer than 10 years to prevent the worst effects of climate change—with most of those respondents claiming the world has two years or fewer to act.

Despite this, 51 percent of those surveyed would be “somewhat” or “strongly” opposed to paying a $2 monthly tax on their residential electric bills to pay to fight against climate change. Similarly, 61 percent would reject a 10 cents per gallon increase in the gasoline tax to fight climate change.

The numbers opposed to electric bill fees and gas tax hikes rose sharply when the proposed fees were increased: 71 percent oppose a $10 monthly tax on U.S. residential electric bills, and 74 percent oppose increasing the gas tax by 25 cents per gallon. Yet these relatively modest cost increases are far below the multi-thousand-dollar annual household price increases that would result from the Green New Deal (GND) and the multi-hundred-dollar price hikes that would result from the GND-lite carbon tax proposals a very few moderate Republicans in Congress are offering to fight climate change.

It would be interesting to ask how many people would support actions proposed to fight climate change—like the ban on all carbon dioxide emissions proposed in the GND—if those polled were informed that science shows the actions would have virtually no effect on reducing future temperatures, disease outbreaks, hurricanes, or sea level rise. Pollsters never ask this question.

People may be worried about climate, but they are far more concerned about many other things with a more direct impact on their lives. Accordingly, during elections, wise politicians will focus more on crime, the economy, education, jobs, national security, privacy, or almost any other topic except fighting global warming. 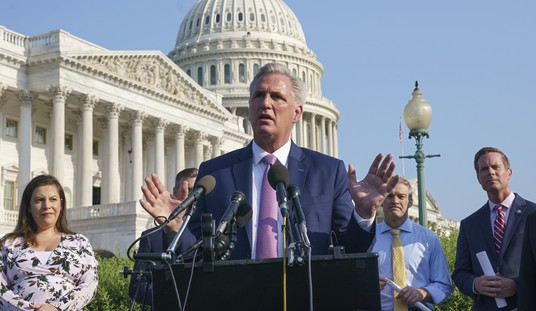 If They Want To Win, Republicans Must Beat Democrats At Their Own Game Scott Morefield
Trending on Townhall Video