Jay Rockefeller Stands in the Way of Obama's Environmental End-Around 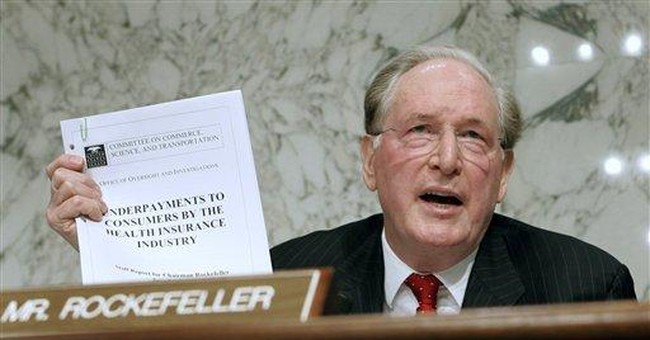 With the “science” of global warming collapsing like a house of cards, the Copenhagen “climate change” conference accomplishing absolutely nothing and a massive energy tax hike going nowhere in the U.S. Senate, President Barack Obama is now faced with a conundrum. He can either read the handwriting on the wall, or seek to accomplish through regulation what he couldn’t accomplish through legislation: the handover of U.S. environmental policy to radical environmentalists.

Does any of this sound familiar? This is frankly the same dynamic we are witnessing in the health care debate. There, Obama says he will use procedural loopholes to ram his version of a socialized medicine proposal through the U.S. Congress against the expressed will of the American people.

Once again, it appears that Obama simply cannot comprehend the meaning of a word understood by literally millions of toddlers: “No.”

As he seeks to push his health care proposals on the one hand, Obama will no doubt attempt to frame the debate along partisan lines. On the energy front, it won’t be so easy.

That’s because West Virginia Senator John D. Rockefeller – who is among the Preisdent’s staunchest allies in the U.S. Senate - is standing up to Obama and the radical environmentalists’ power grab. Rockefeller has recently introduced legislation that would place a two-year moratorium on the EPA’s ability to regulate greenhouse gases from power plants and other stationary emitters, which is precisely the regulatory authority Obama is threatening to use if Congress doesn’t pass his “cap and trade” bill this year.

In unveiling his legislation, Rockefeller noted that his primary objective was to “safeguard jobs,” but he bluntly reminded Obama that it was “Congress, not the EPA” which bears responsibility for setting the nation’s energy policy. Additionally, three other Democratic Senators recently joined Alaska Republican Lisa Murkowski in supporting a resolution that would overturn the EPA’s “scientific” finding of fact regarding greenhouse gases – a finding that forms the basis of Obama’s promised regulatory push.

Whether it’s through regulation or legislation, though, the bottom line is that Obama is seeking to dramatically raise energy prices on American consumers. In fact, documents obtained from his own Treasury Department show that the so-called “Clean Energy Jobs and American Power Act” (a.k.a. “cap and trade”) could drain as much as $200 billion from U.S. taxpayers, or $1,700 per family.

Other estimates place the per-family costs as high as $3,100 a year.

Clearly, that sort of tax hike isn’t something the American taxpayers can afford in any economic environment – let alone this one – even if the legislation were to accomplish its stated objectives of reducing global carbon emissions.

But that’s another fundamental problem.

Neither “cap and trade” nor excessive EPA regulation will do anything to stop countries like China from building dozens of new “dirty” coal plants over the next decade – and perhaps beyond. And frankly, neither will the $50 billion a year that Obama is seeking to steer into a United Nations “climate change fund” for developing nations – part of an international shakedown which columnist Charles Krauthammer has correctly dubbed “wealth redistribution via global socialism.”

Speaking of China (and enviro-scams), it’s also worth noting that America’s new “bailout banker” is one of several countries benefiting from billions of U.S. taxpayer dollars that were supposed to create “green jobs” here in America – yet another example of the true face of eco-socialism.

Fortunately, Sen. Rockefeller and others like him are standing up for American jobs by refusing to let Obama hand the reins of the EPA over to the same environmental kooks who recently ran the U.N.’s Intergovernmental Panel on Climate Change into the ground.

Perhaps these courageous Democrats can finally teach the President the meaning of the word “No,” although from the looks of it voters may have to do that for themselves in 2012.