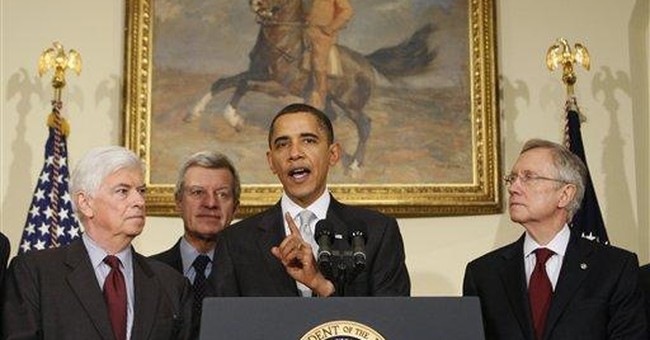 One of the oldest clichés in the book defines insanity as doing the same thing “over and over again” and expecting a different result.

In that case, it’s a pity we can’t give our federal and state governments long-overdue lobotomies.

In spite of overwhelming evidence that the $787 billion bureaucratic bailout passed in February has failed to “stimulate” the economy, President Barack Obama is now proposing that Congress pass a “second stimulus.”

After months of record unemployment and signs pointing to an unprecedented holiday retail disaster, Obama still doesn’t get it.

America must “spend our way out of this recession,”1 Obama said in a recent speech to the Brookings Institution, reiterating his commitment to a failed interventionist approach that has consumed America policy-making for the last two years – and consumed American prosperity along with it.

By January of this year, 3.5 million Americans had lost their jobs and the unemployment rate stood at 7.6%.

That’s when the forces of “change” in Washington decided to put the interventionist policies of the Bush era on steroids, passing the massive bureaucratic bailout and handing out government cash and loan guarantees to favored special interests like candy.

Since the beginning of the recession in December 2007, the federal government has spent, lent or pledged nearly $13 trillion – which equates to $42,105 for every man, woman and child in the United States.

The result of all that taxpayer-funded largesse? Since January of this year, another 3.5 million Americans have lost their jobs, and the unemployment rate has soared to 10%.

Meanwhile, Obama is proposing fresh tax increases on high income-earners (i.e. job creators) to pay for his socialized medicine proposal, and his campaign promise to provide middle class tax relief has evaporated. In fact, with the national debt fast approaching $13 trillion (twice what it was six years ago) and a record budget deficit of $1.5 trillion on tap for the coming fiscal year, it’s becoming increasingly likely that Obama will have to resort to a middle class tax hike in order to cover government’s escalating tab.

Then there’s “Cap & Trade,” a massive new energy tax passed earlier this year by the U.S. House. Disguised as an “emissions marketplace,” this backdoor tax hike does nothing but exploit demonstrably fuzzy science in an effort to deprive American families of as much as $4,000 a year in increased energy costs.

With so much oxygen being sucked out of the American economy (and more deprivation on the way from Washington), it’s amazing that anyone has a job. Anyone not on Uncle Sam’s payroll, at least.

Still, in spite of the unambiguous failure of these interventionist policies, Obama and his allies are now proposing yet another “stimulus” – this one to be funded essentially by loan repayments from the TARP bailout that are legislatively-mandated to go toward deficit reduction.

Where does Obama want to put this money instead?

In other words, Obama’s plan is to continue pouring taxpayer money into the same old unsustainable bureaucracies.

“What needs to be said is that there is no reason that we as a nation have to accept 10 percent unemployment or 18 percent underemployment,” Reich says. “We have the ability to bring that number down.”

On this point, Reich is absolutely right.

We don’t have to accept it – and we certainly can bring that number down.

Of course, doing so would require a complete reversal – not a continuation – of our government’s failed interventionist policies.