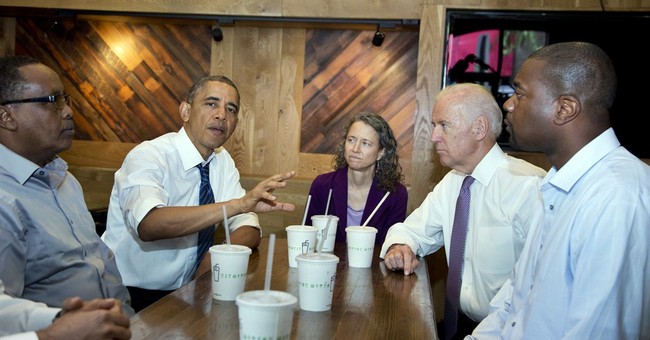 Sometimes it seems like everything in Washington is pure politics – even the simple act of two government workers deciding where to grab their Friday lunch. Of course, that’s especially true if the two coworkers are President Barack Obama and Vice President Joe Biden. Last month the duo ducked into the Washington, D.C. eatery Shake Shack, apparently because, as the President was quoted as saying, the restaurant has “great burgers and pays its employees more than 10 bucks an hour.” Oddly enough, President Obama himself is calling for an increase in the federal minimum wage to “more than 10 bucks an hour” - $10.10, to be exact.

While this effort has so far gone nowhere in Congress, state legislatures have taken up the charge as well, proposing smaller minimum wage hikes up to $8.00 or $9.00 per hour. The most extreme voices have come from Big Labor and their “worker center” front groups, who stage protests across the country – their picket lines filled more often by union organizers and paid “activists” instead of actual workers – pushing to increase the minimum wage to $15 per hour.
The owners of Shake Shack can run their restaurant however they see fit, but government-mandated minimum wage hikes will only hurt businesses across the board. One survey reported that raising the federal minimum wage to $10.10 would force nearly 40 percent of businesses to lay off employees and the Congressional Budget Office (CBO) found that up to one million jobs could be lost. And the $15 minimum wage for which these union bosses continue to clamor would be even more devastating. In fact, for some “early adopters,” it already is.
CARTOONS | AF Branco
View Cartoon
The example of SeaTac, Washington, is especially troubling. At the beginning of the year, a $15 minimum wage went into effect for certain types of businesses in this Seattle suburb. Already, local businesses and their employees are paying the price. The Seattle Times reported that one hotel near the Seattle-Tacoma International Airport – a major hub for local employment, not just worldwide travel – had to shut down their restaurant, laying off every one of its 15 employees. They also fired members of the hotel staff and are toying with the idea of raising their prices. Other businesses have slapped on an additional “living-wage surcharge” for parking spaces.
Local employees are feeling the wage hike’s impacts on a very personal level as businesses try to recoup losses. “I lost my 401k, health insurance, paid holiday and vacation,” one hotel cleaner told Northwest Asian Weekly. The hotel she worked for also used to provide her meals on the job – now those are gone too. She summed up her thoughts on the minimum wage increase simply but powerfully, “It sounds good, but it’s not good.”
And the fever is apparently spreading. Nearby Seattle approved its own minimum wage increase to $15 at the beginning of June. Before the city ordinance was even passed, local businesses saw the writing on the wall. Northwest Caster and Equipment, a family business with a long history in Seattle, packed up shop and moved out of town entirely. The owner told a local news outlet, “It just seems like increasingly the city’s become a more difficult place to do business.” Other stores and restaurants are being forced to scale back or put off expansion, with one restaurant owner calling the Seattle business climate “paralyzed by the uncertainty.”
These events in the Pacific Northwest paint a grim picture of what could happen if union bosses get their way elsewhere. Increasing the minimum hourly wage to $15 is already hurting workers and businesses, and could prove damaging to the local economy as a whole. We can only hope this fever doesn’t spread from Washington State to Washington, D.C.

Top Five Candidates For Nomination to Ginsburg Seat on the Supreme Court — No Men Allowed
Redstate
A ricin attack on the President?
Hotair