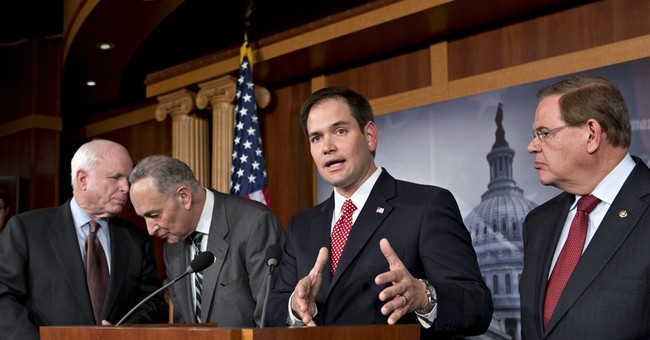 Meet Sandra and Isaac (not their real names). Both hold advanced degrees and are in the United States on H-1B work permits, temporary workers’ visas which allow them to stay here as long as they are employed by a company that cannot find qualified Americans for their jobs. They pay income and social security taxes; they do not collect welfare or take advantage of other entitlement programs.

Sandra and Isaac, like many members of my church, are highly educated, law-abiding West Africans who would love to become Americans citizens or at least permanent legal residents. Unfortunately, their Green Card applications have been mired in decades of red tape. Yet a bill being debated in Congress right now would put 11 million people who entered the country illegally (or overstayed their initial visas illegally) on a “path to citizenship” that would add to Sandra and Isaac’s bureaucratic nightmare.

The proposed “reforms” being debated in Congress right now avoid the word “amnesty,” but would ultimately legalize over ten million illegal immigrants in exchange for a promise to increase border security. You do not have to be a policy expert to see that there are several problems with this approach. I will offer a partial list of my own concerns:

1. We’ve tried this before and it didn’t work. Our country actually enacted a similar “path to citizenship” under President Reagan. The 1986 Immigration Reform and Control Act legalized over three million illegal immigrants with the promise that further entrance of illegals would be halted or at least significantly reduced. Instead, the number of people living here illegally has more than doubled since the passage of the law. Its original sponsors, Alan Simpson and Romano Mazzoli, have admitted that the law did not achieve its intended ends.

2. Allowing unlimited numbers of low-wage workers into the country will continue to undercut the wages and job prospects of the poorest Americans. It is not upper level managers or CEO’s who lose their jobs when we receive ten million low-wage laborers over our borders. Studies consistently demonstrate that black employment rises in response to enforcement of immigration law. While unemployment nationwide hovers around 8%, black unemployment remains 13.2%. Might employers find a way to hire some of those blacks if we decided to enforce our immigration laws instead of loosening them?

3. Many countries are using American money to prop up their own corrupt and incompetent governments. We all know that many illegal immigrants are sending money back to their home countries; the total amount is unknowable, but it is probably more than $30 billion a year. While this is a completely understandable and noble act on a personal level, its scale allows American prosperity to subsidize the often incompetent and corrupt leadership of illegals’ countries of origin. While this may bring some immediate relief to certain individuals, over the long term it merely prolongs the suffering of the masses of people who do not have relatives sending them money from more competently governed countries.

4. A new influx of individuals eligible for numerous federally funded entitlement programs will bankrupt our already strained system. Our entitlement system is already badly broken. According to a Congressional Research Service study released in 2012, Federal and State welfare spending was more than one trillion dollars in 2011. Obamacare is set to add 30 million new people (not including any newly legalized immigrants) to government funded health insurance. Even the most pro-amnesty advocates admit that the taxes paid by newly naturalized illegals will not come close to offsetting the federal and state benefits they are likely to receive.

5. Almost no one believes the bill will result in greater border security. Homeland Security Secretary Janet Napolitano admitted to Congress last year that terrorists who want to harm Americans enter the US from Mexico “from time to time.” A Rasmussen poll released in May showed that just 30% of American voters trust the government to take steps to secure the border if the immigration bill passes Congress.

6. The people who would be responsible for implementing and enforcing the new law oppose it. Representatives for employees of the U.S. Immigration and Customs Enforcement and U.S. Citizenship and Immigration Services called proposed reforms “a dramatic step in the wrong direction.” The Senate bill, they say, does nothing to address border security, nor does it address how the millions of new citizenship applications can be processed in the timeframe required.

Why are both major parties toying with such a deeply flawed bill? Quite simply, Democrats will get a huge influx of voters, and Republicans will continue to provide various corporations with cheap labor. Republicans also hope to shed the image that they are anti-immigrant, although this is not what happened after the Reagan Amnesty in 1986. It is long past time for both parties to create an immigration strategy that can work.

Be sure to let your representatives know that they need to take a step back and apply real leadership and common sense, instead of pandering to various special interest lobbies. Your voice does have power – call or e-mail them today!