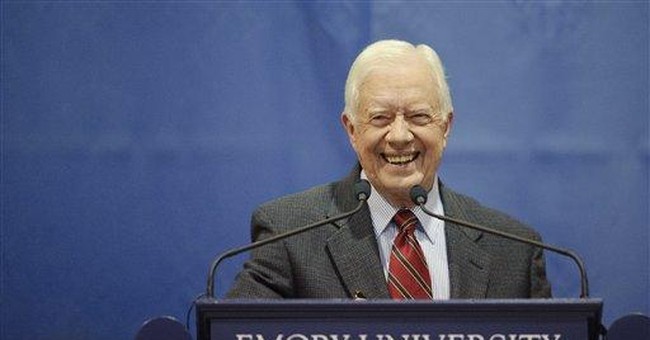 On May 15, 2007, I stopped at one of Washington DC’s most well-known soul food restaurants. As I waited for my favorite fare, a news flash came over the air stating that Jerry Falwell had died of a heart attack. Suddenly, a black waitress began to dance and celebrate because of Falwell’s passing. She was truly elated. In her mind, a great enemy of civil rights and the black community had just left the battlefield.

Ironically, I had just spoken in a conference with Dr. Falwell a month before. In fact, I served on a board with him. He was warm, friendly, and had a heart for all people - including African Americans. In my view, he was a champion of Christian values and faith.

The wild antics of the waitress showed that she simply did not know the man. She, like many blacks, only knew the caricature that the mainstream media had painted of a spiritual giant. Unfortunately the “Moral Majority” never worked to change its image among the millions of blacks, Hispanics, and other minorities who had no firsthand knowledge of the movement. Further, the Moral Majority never took it upon itself to challenge followers who were genuinely part of a racist fringe. As a result, an invisible “no blacks allowed” sign seemed to hang over the entrance to the movement.

Once again, the Left is trying to label decent people as monsters and the righteous as hypocrites. Today conservatives and the religious Right have a unique opportunity to re-brand themselves as being compassionate and caring toward the poor. We cannot afford to fall into the trap of winning a Pyrrhic victory on pet issues, while being negatively labeled so that no one can hear our voices on major long-term fronts.

President Jimmy Carter has claimed that the much of the recent challenges to the administration were personal. “I think people that are guilty of that kind of personal attack against Obama have been influenced to a major degree by the belief that he should not be president because he happens to be African-American.” were his misguided conclusions. Unfortunately, it does not help the conservative movement to have the Tea Party movement cast as racist. One writer (Keith Richburg of The News International) penned the following observations, “One did not have to look too hard at the 12 September anti-Obama rally in Washington – an overwhelmingly white, largely rural crowd – to see the sea of Confederate flags, a symbol of ‘heritage’ to some southern whites and a symbol of racist oppression to blacks. Or the racially laden signs, such as ‘The zoo has an African lion – the White House has a lyin’ African.’ Others held signs that demanded Obama be sent ‘back to Kenya’.”

Countless others have attempted to lift up their voices to malign the Tea Party grassroots movement. Simultaneously widespread conservative resistance to the administration’s healthcare plans is being labeled as anti-poor. The historic problem conservatives have had is that they play into the hands of their enemies, from a public relations perspective.

For example, the movement’s unreserved support of the Joe Wilson outburst troubles most African Americans. Blacks and Hispanics, who struggle daily with issues of respect, have very little patience with these kinds of outbursts. Conservatives applaud Wilson’s passion, while forgetting the arena of public opinion. The fact that his interruption of the president’s speech has been tagged as racist is very predictable. For African Americans like myself, we were saddened by the fact that the Congressional Black Caucus (CBC) led the charge to get Joe Wilson reprimanded. The CBC also has a long history of demonizing its opposition. Every time the caucus fears that its members will go off of the “ideological plantation,” they play the race card.

Instead of being protectors of the long-term interests of the black family, the CBC often sells out the family in the “quid pro quo” dance for economic advantage. Instead of seeing the healthcare proposals on the table as holding great danger for black families - pregnant teenagers, elderly parents, and thousands of unborn black babies, the caucus applauds the proposed legislation without reservation.

The CBC’ s history on pro-family issues is atrocious. The group is pro-abortion (despite that black abortions are 3 times their percentage of population). The black family is crumbling from within. Nearly 8 out of 10 black babies are born out of wedlock; nearly half of our pregnancies terminated by abortion; over 40 percent of both black men and women will never marry; and HIV/AIDS infection rates are out of control. If any group should oppose the president's healthcare proposals, it should be blacks.

Yes, Joe Wilson was out of order. Yes, blacks want to support the first black president. But no, blacks should not “sleep” the important aspects of healthcare in order to protect our racial “hero.” Blind allegiance based on race is the exact opposite of the substance of King's Dream.

So what should wise conservatives do? We should attack bad policies, not the President. We should go out of our way to challenge racists in our midst. In addition, we should insist that none of our friends continues to accuse the President of being a secret Muslim or being born outside of the US.

The scripture says that we must be wise as serpents and harmless as doves. Let’s do just that with regard to personal attacks on the president. Together we can be a force to awaken our friends to important concerns. Let’s speak the truth in love!