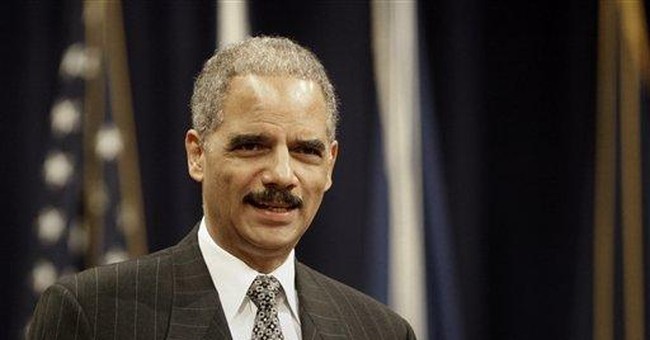 This past week, Eric Holder, the nation’s first black Attorney General, got off to a rocky start. What could he be thinking?, I asked myself as I watched the speech on C-Span. As he read his speech without the use of teleprompters or the dramatic flair of his friend, President Obama, Holder fumbled in his attempt to draw upon knowledge of history and instruct his fellow citizens about how to overcome the problem of race in our land. His timing and his delivery made me cringe as I watched his remarks. I knew instantly that Holder’s ineptness would reflect badly on his boss and the entire Obama administration.

Perhaps Holder’s problem began with a subtle misunderstanding of the role of the Attorney General. No, I am not talking about an understanding of the job description. I am talking about having a proper respect for how those greats in the Attorney General office helped change their world. Despite the lackluster performance of several recent AGs, this position has been responsible for setting the tone for both law enforcement and the direction of the nation’s concept of justice. For example, Robert Francis “Bobby” Kennedy served in this post from 1961 to 1964. He worked with his older brother, President John Kennedy, during the Cuban missile crisis and helped establish the legal foundations for the lasting impact of the civil rights movement. Kennedy’s visionary courage concerning the rights of blacks got him assassinated - just as civil rights champions, Dr. King, and Bobby’s brother – J.F.K.

Therefore, I was shocked by Holder’s statement last week in which he made the following statement, “…Though this nation has proudly thought of itself as an ethnic melting pot, in things racial we have always been and I believe continue to be, in too many ways, essentially a nation of cowards.” Perhaps Holder’s view of the AG function was tainted by a combination of pride (in his own achievements) and personal racial bitterness. I am not qualified to assess the root causes for the flaws in his logic, yet as an African American I cringed when this affluent armchair intellectual called us a nation of cowards.

Cowardice could hardly describe the sacrifice of Medgar Evers, Rosa Parks, and thousands of nameless Americans that marched with Dr. King. Hundreds of martyrs, both black and white, gave up their lives for the advancement of colored people in the last century. In addition, America is changing culturally. I pastor a church that has 22 different nationalities worshiping together. This weekend, my church members chose to spend time together – not just talking about race - we are working together to change America. White families are adopting disadvantaged black children and interracial couples are raising their families in the safety of our social network.

Even if someone agrees that Americans should be even more courageous in righting the collective wrongs of our culture, we have come a long way. My fear is that Holder was making an announcement “in code” or a veiled threat to right some “imagined” wrongs that many of us do not have on our radar screen. These wrongs probably go far beyond the race issue.

Instead of celebrating the nation’s destruction of the ultimate glass ceiling for minorities – electing first black president, Holder misjudged the unique opportunity he had been given to intensify the nation’s racial reconciliation efforts. If he had been encouraging, he could have opened the hearts of millions of Americans and gained countless allies. Every parent knows that you can get a baby to take its first, bold steps easier by lovingly calling its name than by threatening a bewildered kid, who is mastering new skills.

Perhaps it was wishful thinking for me to believe that Holder would have set a tone of celebration that would motivate people to take more groundbreaking steps concerning placing African Americans in critical roles in the nation. Holder resembled a specialist that had rushed out of the dusty back rooms of the legal world to deliver a book report instead of the manifesto it could have been. Filled with pride of learning, he forgot to be a statesman. I hope he will analyze his mistake and avoid “hoof and mouth disease” in the future.

Despite Holder’s hang-ups, the Justice Department’s Black History Month celebration ended on the right note with the singing of the National Negro Anthem (Lift Every Voice and Sing). Written by black lawyer and civil rights activist James Weldon, the song thanks God for justice and strength to blacks. It also pledges allegiance to both God and our nation. I offer the last two stanzas of the song as my prayer for all Americans - black, white, Hispanic and Asian.