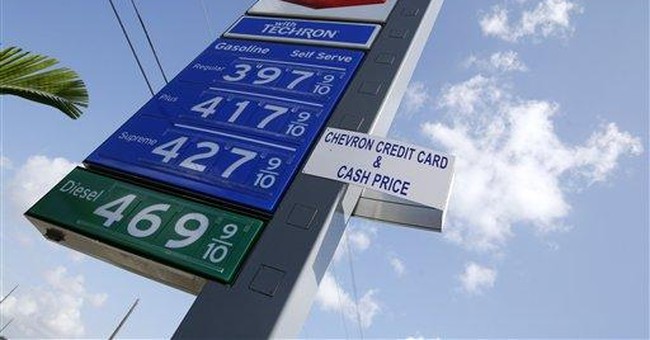 Two weeks ago, more than two-dozen civil rights, African-American, agriculture, senior citizen, and veteran advocacy groups came together to begin the STOP THE WAR ON THE POOR Campaign. We announced our support of legislation of any kind that will increase domestic energy supplies and decrease energy costs for our domestic poor. We especially like the Americans for American Energy Act (HR6384), which offers significant short-term and long-term solutions to our energy woes that amount to economic enslavement of the poor. The increase of African-American and senior groups speaking out on this issue is a new and unexpected twist in this debate. Evidently, it has made a lot of people nervous on Capitol Hill.

This week a partisan political group, funded by radical green groups, is answering our call. US House of Representative Majority Whip James E. Clyburn and several African-American leaders will release their take on the impact of climate change on the poor - especially the African-American community. Although credible experts will be called to stand with them, the central question of how to alleviate the short term suffering (5 or less years) of the urban and rural poor will likely remain unanswered.

My premise for continuing my comments from last week is that no one has realistically taken up the cause of the poor in the discussion of energy policy. I hope that the information here will inspire you to join a growing army of justice-minded Americans that believe we should not turn over our national checkbook without knowing the specific return on investment we will receive for our efforts. Further, environmental justice must include consideration of the domestic poor who live in New York, Chicago, and DC. This faceless and voiceless group must be represented.

If gasoline prices rise to $6/gallon, the situation will financially destroy many vulnerable citizens who are living on the edge in this challenging economic environment.

Here are some facts I would like you to consider:

• Median-income families devote about a nickel on every dollar of income to energy costs, while poor families must devote as much as 50 cents on their dollar.

• High-energy prices are one of the single biggest drivers of homelessness.

• In order to cope with higher home energy and gasoline costs, 70 percent of households have reduced food purchases; 30 percent reduced purchases of medicine and 20 percent changed plans for their own or their children’s education.

• Eight percent of households with incomes between $33,500 and $55,000 have had their electricity shut off this year due to non-payment.

• Rural counties in the South and West are hit hardest. Families in many southern counties, and several in Wyoming, are spending 10 to 15 percent of their income on fuel.

• Escalating energy prices have a disproportionate impact on the elderly. In a recent survey, more than two-thirds of people 65 and older said that the recent rise in gas prices has caused them a great deal or a fair amount of financial hardship. Given their median household income is less than $30,000 a year seniors have been forced to make significant changes to their daily schedules and spending habits.

• Rising gasoline prices have severely affected the volunteer base, which serves the poor and needy. Meals on Wheels reports that 58 percent of its centers have “lost volunteers due to gas prices” and 48.3 percent reported that “increases in gas prices had forced them to eliminate meal delivery routes or consolidate meal services” • The National Association of Area Agencies on Aging reported that over 73 percent of agencies said it is more difficult to retain volunteers and over 74 percent said it is more difficult to recruit volunteers.

• In some areas, Goodwill will no longer do home pickups for donated items because gas prices are too high.

• Educate the American people to the fact that this “War on the Poor” is occurring,

• Educate the news media to look behind the press releases and the political spin of some of our politicians and see the cruel impacts of these policies on the poor, and

• Educate policymakers to the real and daily impacts of policies that restrict energy supply and raise prices.

There are a few glimmers of hope, however. For example, President Bush has lifted the Executive Order on new oil and gas exploration on the Outer Continental Shelf. This is an important first step, but must be followed by specific congressional action. Billions of barrels of oil and new supplies of natural gas are available to America if we do this. We have decades of supply under our control – but we must act now.

We will not stop until we change federal policies and encourage more US energy for Americans, and better incentives for energy conservation. We are thankful that we have legislators from both parties in our campaign. Bi-partisanship is truly rare in these days.

Will you join us? Visit http://www.stopwaronpoor.org to educate yourself on the issues. Start discussions with your co-workers and friends to increase their awareness of the problem. Finally, let your congressional representatives know that you are watching how they respond to this crisis and this will greatly influence how you vote in the upcoming elections.