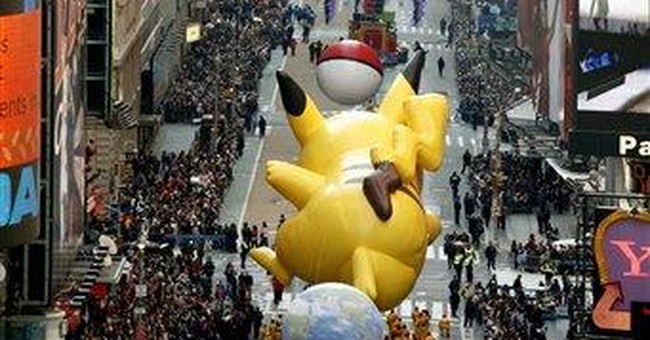 As we all head to our parents’ or grandparents’ houses for Thanksgiving or plan to hold the celebration at our own homes with family and friends, it seems like a good time to remember how Thanksgiving reflects many of the core values that make us a remarkable nation.

I have always found it interesting, at least in my family for example, how Thanksgiving shows both the binding nature of our common, very American culture, and the beacon it has always been to people from all over the world whose greatest goal in life is to immigrate here. We always served turkey, of course, when I was growing up because that is the American way. But the side dishes we served came from my parents’ immigrant backgrounds. My German grandmother and mother would make dumplings, sauerkraut, red cabbage, and other traditional Silesian dishes to go with the very American bird we were consuming, with apple strudel for desert.

When my oldest sister married into a family of Italian descent whose forebears had immigrated several generations before, I discovered that they served pasta and other traditional Italian foods with their turkey. When I married someone whose family has been here since shortly after the Mayflower came to Plymouth Rock, we added some very traditional New England favorites to our Thanksgiving spread. That diversity of food, held together and molded around the American turkey, is symbolic of our history of immigrants from all over the world being molded into the melting pot that is America. It gives truth to our nation’s motto, e pluribus unum - out of many one.

Thanksgiving is the national holiday where our extended families get together. The importance of strong, nurturing families and the values they instill have always been a key part of our success, and the success of so many individuals throughout our history. Thanksgiving is the biggest travel holiday of the year because almost everyone is trying to get home to see their parents, grandparents, siblings, and other members of their families. I am traveling 11 hours this week to get home and I am really looking forward to the food, the conversation, the laughter, and the emotional high from seeing my family. America is a nation that celebrates its families, and Thanksgiving not only brings our own families together, it brings our nation together as the American family.

Thanksgiving is the holiday where we are commemorating the founding of what has become the greatest democracy the world has ever know, a cradle of liberty and freedom. It is a nation where every citizen has the opportunity to pursue their own dreams and aspirations. We have more freedom and liberty than any nation has ever had, even though the current administration and Congress seem intent on eroding that distinction. It is a nation where we are can speak our minds without having to worry that the secret police will knock on our doors in the middle of the night, a worry that too many people still have around the world in places like China. It is a nation where we can practice our religion as we see fit, and no one will persecute or kill us for what we believe, a freedom that is nonexistent in too many places, the Middle East in particular. It was that very right that the Pilgrims sought when they brought their families on a long, dangerous voyage to a new and savage continent.

Those first English immigrants whose successful harvest we are celebrating risked everything to come here 400 years ago. They helped give birth to a nation forged in liberty, and there are many Americans who have given the last full measure of their lives to preserve the nation they founded.

While many Americans realize they have great freedom and liberty, too many seem to take it for granted. Like many other sons of immigrants, I know how precious this freedom is from my family. My parents saw and experienced some of the worst dictatorships of the last century. My childhood was filled with their stories of the cruelty, tragedies, and devastation they saw. I realized at a very early age just how lucky I was to be living in America. My parents gave me the opportunity to grow up on these hallowed shores and to enjoy a yearly celebration that is uniquely American.

So while you are enjoying your turkey and your family, and perhaps all of the great football games that will be going on this Thanksgiving, don’t forget all the good things we have here in this shining city on a hill. The liberty and prosperity we enjoy is something that very few have experienced throughout the history of civilized (and not so civilized) man.

Thanksgiving should remind all of us that America is a precious place that we have an obligation to preserve for ourselves, our children, and those who come after us.