Hannah Blair
|
Posted: Oct 02, 2019 2:57 PM
Share   Tweet
The opinions expressed by columnists are their own and do not necessarily represent the views of Townhall.com. 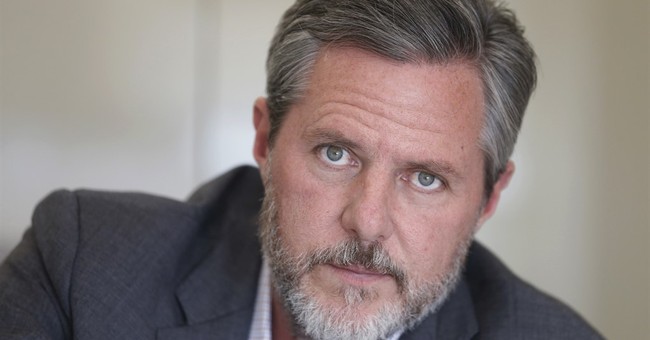 In an op-ed for USA Today, MSNBC commentator Sophia Nelson suggests that leaders like Liberty University President Jerry Falwell Jr. have “driven away a generation of young parishioners,” claiming that “what they teach in the pulpit is not what they practice in the public policy arena.”

Another op-ed in The Washington Examiner, this one by a recent Hillsdale grad, claims that Falwell is “a shoddy example of what it means to be a Christian: a faithful Christian dedicated not to personal gain, but to a life of faith that will inevitably require sacrifice and humility.”

As a member of Generation Z who grew up in the church and graduated from Liberty, I’m well aware that one of the biggest problems facing the church today is its ability to attract and retain younger generations. But contrary to the opinions of these two authors, I believe that it is their type of holier-than-thou language that is turning young people off to Christianity in droves.

I’ve heard pastor after pastor criticize, mock and judge my generation. Falwell, who’s not even a pastor and never claimed to be, chooses to be a champion of young people rather than degrade them. He has always been an advocate for young people, valuing genuine, non-judgmental leadership over rules and legalism. It’s no secret that he’s not a fan of some of the outdated rules still in place by the old guard, and students have always found his authenticity refreshing.

No, not everyone at Liberty agrees with all of Falwell’s opinions, but unlike most college indoctrination dens that stomp out opposing views, Liberty has always encouraged students to seek them out and Falwell regularly extends speaking invitations to his political and ideological adversaries, though only few accept them. When visiting Liberty earlier this year, Harvard professor and intellectual leftist Alan Dershowitz said “I think many people would be shocked to know that Liberty University is more diverse in its opinions than Harvard University.”

Liberty and Falwell represent fearless, unapologetic leadership. They foster an environment that allows students to think for themselves and make their faith their own.

This attitude has allowed Liberty to grow exponentially, despite the decline in young Christians across the country, and place itself on the map in the likes of powerhouse schools like Notre Dame. Students and athletes who would normally stay far away from judgmental Christian schools are attracted to Liberty’s unique way of fostering a Christian environment without forcing it.

Liberty, under Falwell’s leadership, has done more good for this world to help people in need and regularly steps up to provide relief, humanitarian aid and loving arms for the afflicted when no one else will – oftentimes with no recognition.

It’s no coincidence that the attacks on Falwell and Liberty are ramping up at the same time the school is enjoying tremendous successes, some of which include a No. 1 ranking in Best Online Colleges in America, a massive enrollment of over 100,000 students (and the only private university in U.S. News & World Report’s Top 10 list of colleges with the most undergraduates), a 95 percent bar passage rate for law graduates, a No. 4 national ranking in the American Bar Association’s inaugural Top Ten Competition Law Schools, and a $1.6 billion campus transformation plan – which includes the recent launch of a 152-program business school that hopes to train the next generation of entrepreneurs and business leaders with scriptural and constitutional precepts.

Liberty’s successes have led to disdain from certain Liberty employees who are resistant to change, and a combination of anger and fear from liberals who do not want to see Liberty’s Christian influence on the national stage.

Imagine if these business leaders and exceptional law graduates further advance Trump’s policies and influence conservative judicial appointees? Falwell had a non-negotiable impact on the 2016 election, so it’s no surprise that these attacks are ramping up as the left is trying to bring him down and discredit him ahead of 2020.

Politico’s recent anonymously sourced smear campaign against the Falwells, which happened to be written by a disgruntled anti-Trump Liberty alum, was disgusting and an act of cowardice at best. All the accusations about personal enrichment were debunked in this 19-page report released by the school, but the damage was already done. Over the past few years, reporters and leftists have gone to great lengths from their ivory towers to delegitimize Liberty because at their core they hate what it stands for.

I saw it during my four years as a Liberty track and field athlete when our athletic program was barred from entering conferences solely because of our Christian evangelical mission. MSNBC host Rachel Maddow recently smeared the school as an illegitimate university because it was founded by a televangelist (despite the fact that most Ivy League schools were founded by preachers and evangelists), while her network ran the absurdly hypocritical headline “Following ‘racy photos’ report, Falwell has some explaining to do.” Explaining for what? Intimacy between a man and his wife? The attacks are pathetic at best. If you want to know the motive behind these constant frivolous and empty accusations, look no further than The New York Times’ campaign to “Expose Christian Schools.”

If the media really cared about the well-being of colleges, they’d be going after schools that routinely encourage violence and harassment of conservatives. And if fellow Christians and disgruntled employees truly cared about the well-being of Liberty, they would put down the stones and reevaluate their motives for smearing and doxxing the Falwell family while hiding behind left-wing media outlets.