Hank Adler
|
Posted: Mar 16, 2016 12:01 AM
Share   Tweet
The opinions expressed by columnists are their own and do not necessarily represent the views of Townhall.com. 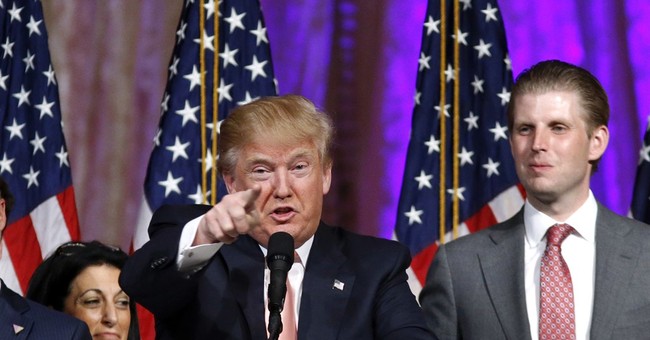 One year ago, a forecast of a contested Republican Convention was not unrealistic given the number of announced candidates for President of the United States. Many expected a result going into the Republican Convention of delegates approximating the following: Bush 35%, Cruz 30%, Paul 25% and others 20%. No conservative was going to be happy with Jeb Bush garnering the nomination with 35%.

Last week, Donald Trump responded to a question about who should get the nomination of the Republican Party if no individual garners a sufficient number of votes to win on the first ballot. Mr. Trump offered the following:

"I think that whoever is leading at the end should sort of get it. That's the way that democracy works, I don't know that that's going to happen. But I'll tell you, there are going to be a lot of people that will be very upset if that doesn't happen. I think that would be pretty unfair."

Mr. Trump's statement comports neither with the historic norms of open conventions nor with most definitions of democracy.

Some fellow named Abraham Lincoln arrived at the 1860 Republican convention with 23% of the delegates while William Seward arrived with 38% of the delegates. It would be hard to find any historian or anyone else who does not think the convention system worked pretty well in 1860 or that the Republicans picked the wrong candidate. But maybe Mr. Trump thinks the nation would have been better served with Mr. Seward.

It is the goal of the convention for the delegates to select a nominee who will best represent the political party in the national election. The very nature of claiming that with less than forty percent of the delegates, a candidate should be entitled to the nomination is both nonsense and not in concert with the history of political conventions in the United States.

If Mr. Trump was interested in the history of the United States and he should be, he would know that the leading candidate with less than fifty percent of the delegates on the first ballot almost always is not the nominee. That has been the case in two thirds of the conventions since 1900 where no one has secured the nomination on the first ballot.

There have been nine conventions since 1900 where the presidential nominee was not selected on the first ballot. At only three of those conventions did the first ballot leader secure the nomination. In the other six, candidates with as few as five percent of the delegates at the beginning have been the nominee and often the initially non-leading candidate has won the presidency. Included in the list of presidents who did not achieve first ballot victories was Woodrow Wilson. Wilson was not in the delegate lead until the 30th ballot.

Mr. Trump may be right, there may be many of his supporters who would think it was unfair for him to have the highest number of delegates going into the convention and not get the nomination. However, if Mr. Trump did not intend to play by the Republican convention rules when he began his campaign as a Republican, why did he not start out as a Democrat or an Independent?

Mr. Trump is running a scorched earth campaign in 2016. He has bullied and insulted his way into March and now he needs to go to the Republican convention and beg for more delegates. "I know I told the American people that you were a liar and a jerk, but I really need your help" could prove a very tough sell.