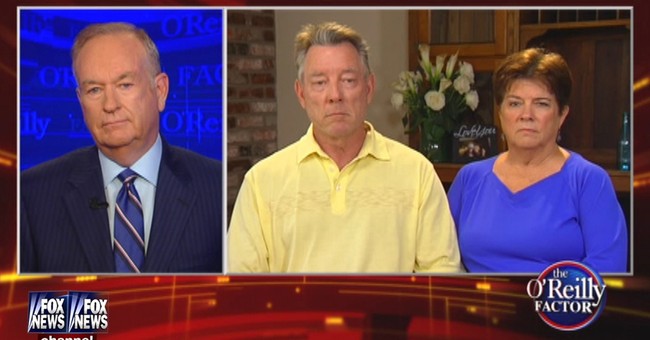 No one could be against such a simple proposal. The message is clear: If you come into the United States illegally, commit a felony and are deported, the risk of returning to the United States will be significant. Short form: "If you committed a felony and you are not an American citizen, we do not want you in the United States. Stay away!" The short form of anyone opposed to the idea must be saying: "We welcome felons coming into the United States illegally. It is no big deal."
O'Reilly is supporting a simple answer to a simple problem. It does not get to H.L. Mencken's famous quote: "For every complex problem there is an answer that is clear, simple, and wrong." This is not a complex problem, it is a tiny element of the seemingly complex problem of immigration. There can be no downside to making the risk of a felon returning to the United States such that the felon might actually determine not to return to the United States. It is not as if the proposal calls for shooting on sight. The whole concept of having penalties for committing crimes certainly has as its first goal to discourage individuals from committing crimes. Five years in a federal prison should discourage individuals from doing most any act, including entering the United States illegally.
CARTOONS | Tom Stiglich
View Cartoon
George Orwell imagined the future, our current present, when, in 1949, he first published his famous novel 1984. He imagined the future with a precision that is becoming simply scary.
Orwell imagined a world where: "The heresy of heresies was common sense." Kate's Law is nothing more than common sense. Let's increase the risk of returning to the United States for a convicted felon. Maybe, just maybe, the potential of a five-year prison sentence will keep the felon from returning to the United States.
And Orwell was even far more omniscient when he spoke to using language to walk away from the difficulty of confronting any troubling issue: "In the end we will make thought crime literally impossible, because there will be no words to express it." Hence, the illogical substitution of undocumented worker for illegal alien. Change the words 'convicted felon' to the phrase 'previous punished individual' and the alleged killer of Kate Steinle becomes an undocumented worker who was previously punished instead of an illegal alien criminal.
It is common and accurate to see the methods of the left wing of the Democratic Party as coming from the words of Saul Alinsky. Attack and demean anyone with whom you disagree rather than consider the substance of any important issue. No better example than the words of Democratic spinners this week in attacking Kate's Law as the 'Donald Trump Act'. What do Trump's rantings about the immigration issue have to do with a proposal in response to a horrible murder? Then we have those who want comprehensive immigration reform rather than doing anything rational to protect the borders of the United States and its citizens. No individual step is worth taking unless .............
Orwell hypothesized that part of the success of totalitarianism was control of language. Alinsky hypothesized that control of the body politic could be achieved by attacking the proponent of an idea rather than the idea. Today, we see both methodologies being employed to limit or stop honest debate and discussion. Witness Kate's Law, a small logical step to protect Americans from illegal convicted felons.
Tis a scary time.