ON THE ROAD: Van Tran's Unlikely Insurgency in CA-47 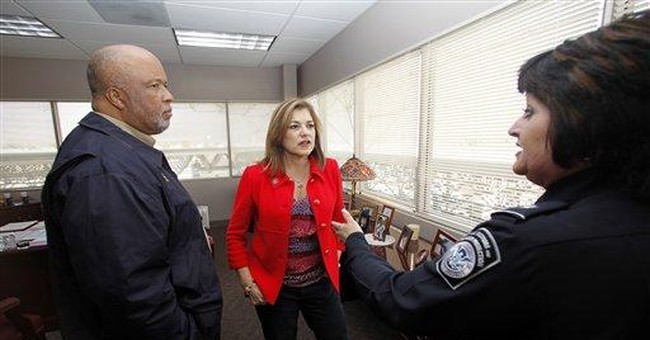 SANTA ANA, CA – Bill Clinton is wagging his finger and issuing a warning to a crowd of about 800 voters gathered in front of the Old Orange County Courthouse in downtown Santa Ana. For the first time in his nearly 30 minute speech, the former president adopts a lecturing tone. “Don’t badmouth [Loretta Sanchez’s] opponent. He’s an honorable man who’s lived an honorable life, and he’s made a good contribution,” he says. Clinton isn’t finished praising the Republican opponent of Rep. Loretta Sanchez (D-CA), whom he’s come to support in her floundering re-election campaign. Without referencing him by name, Clinton calls Van Tran “impressive” and “an American success story,” much to the surprise of the 30 or so pro-Tran demonstrators standing along the perimeter of the assembled coterie of Democratic partisans. The crowd, dotted with SEIU purple and “Yes on 19” buttons, applauds tepidly.

“Let’s pull the tape and splice together the clips of Bubba praising Van,” George Andrews barks into his cell phone. Andrews, a 26-year-old San Franciscan of Indian descent, is Tran’s campaign manager. Team Tran had a camera-toting tracker embedded in the audience, recording every moment of the rally. “I bet Loretta wasn’t expecting that,” he chuckles. Andrews and Tran find themselves in the thick of an improbable election fight: Andrews is a rookie campaign chief seeking to shepherd Tran, a first-time Congressional candidate, to victory over an incumbent who won 69 percent of the vote two years ago. In order to pull off the massive upset, the pair must skillfully traverse one of the most complex political landscapes in the nation: California’s 47th Congressional District.

“This is a trilingual race,” Andrews tells me over a lunch of steaming bowls of Pho, a traditional Vietnamese soup dish. “There is no other targeted congressional race in the country with these dynamics.” That may be an understatement. CA-47 is a socially conservative district that strongly backed Prop 8—the state’s anti-same sex marriage Constitutional amendment—on the same day it voted for Barack Obama over John McCain by an overwhelming 22 points. Whites are a minority in the district, making up roughly 35 percent of the electorate; 50 percent of CA-47’s voters are Hispanic, and the remaining 15 percent are Vietnamese.

“When we canvass neighborhoods, we try to send out teams of volunteers who can speak English, Spanish, and Vietnamese among them,” Andrews says. “It’s a very tough district for Republicans. This is a blue collar area with a party registration breakdown of about 47 Dem to 31 Rep. But this race has exploded because of Loretta’s record and big mistakes.” Andrews is referring to Sanchez’s paltry legislative record over 14 years in Congress, her controversial fundraising junket at the Playboy mansion, and an infamous Univision appearance in which she made racially charged comments about "the Vietnamese” trying to “take” her seat.

The nationally televised diatribe, which was exposed by a Latino Tran supporter, flies in the face Clinton’s call for civility. “Loretta Sanchez, sadly, has waged a nasty campaign of hate, fear, and misinformation,” Tran tells me at the Western CPAC conference in Newport Beach, where he’s receiving a ‘Taxpayer Champion’ award. “You’d think a seven-term member of Congress would be able to run on her record and accomplishments. Instead, she’s running away from her record and attacking me. I’m a big boy, and I’ve been in the arena for awhile -- so I can handle negative comments. But she should at least be fair and truthful,” he says.

Unlike other portions of Clinton’s speech (he inaccurately claimed that Republicans maintained “total control” of Congress from 2002-2008), his description of Tran as an impressive success story is undeniable. When he was just ten years old, Tran and his family fled war-torn Vietnam, emigrating to the United States in search of a better life. When they arrived stateside, Tran knew only two words of English: “Okay” and “Salem,” a popular brand of cigarettes among American GIs stationed in his homeland. “My candidacy is an affirmation of how great this country is,” he beams. “I came here as a little boy with literally the clothes on my back, and without any knowledge of the language, and now I’m the first Vietnamese-American member of the legislature of the largest state in the union, and a candidate for the United States Congress. Where else on this earth is that possible?”

Tran’s compelling life story, coupled with his energetic campaign and an established track record as a small government, pro-family conservative has concocted what Republicans hope will be an ideal elixir to poison Sanchez’s re-election effort. The latest poll, which Townhall first reported, shows the race in a dead heat—with each candidate earning 39 percent of the vote. The fact that the contest is tied is striking in and of itself, but what must truly worry the Sanchez camp is its candidate’s extraordinarily low re-elect number. As a point of reference, Sanchez was re-elected in 2008 by an overwhelming 44-point margin.

As Election Day approaches, Tran says he plans to maintain a heavy focus on job creation. “My message is all about creating jobs. I know politicians utter these slogans all the time, but this goal is very personal to me. When someone has a job, they have an added self-identity and self-worth. They’re productive members of their community, and they’re providing for their family. That is the essence of the America that I cherish,” he says. The father of two young children also professes deep apprehensions about the longevity of the American dream if the current Congress’ spending binge continues unabated. “I ask myself, will my kids have the same prospects for success that I had, and I challenge myself to ask what am I personally doing to protect and sustain those opportunities? Those are the biggest questions weighing on my mind. You want to talk about legacy? That’s what matters to me,” he says.

Tran aides will be the first to admit their path to victory remains very steep. Aside from her built-in Party ID advantage, Sanchez has another major edge: Cash. According to the Tran campaign, they’re facing a massive cash-on-hand deficit of more than $700,000. Tran hasn’t run a single TV advertisement during the entire general election campaign, and according to Andrews, going up on air is still merely an aspiration at this point. Given the institutional obstacles facing his upstart campaign, it’s remarkable that Tran remains in the hunt. At its core, he says, the race will come down to whether CA-47’s voters share his core values: “Individual liberty, freedom, entrepreneurship, faith and family.” If they do, he predicts, “we will achieve have a very exciting victory” in November.