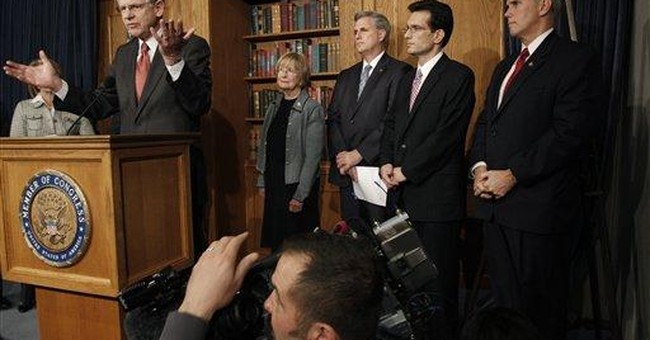 In light of the still-developing Murkowski/Miller Alaskan stunner, the Beltway media has begun highlighting another Senate primary pitting an established moderate Republican against an insurgent conservative who has little perceived chance of winning.

In Delaware, nine-term Republican Congressman and former Governor Mike Castle is expected to win the GOP primary on September 14 and cruise to victory over Democrat Chris Coons in November.  But conservative challenger Christine O'Donnell stands in his path.  O'Donnell has attracted some national attention, making the rounds at grassroots events like AFP's Right Online and earning endorsements from prominent movement figures like Michelle Malkin, Mark Levin and Erick Erickson.

O'Donnell's support is hardly unanimous on the Right. Other conservative bloggers, such as Fred Bauer, express alarm at the prospect of an O'Donnell upset, arguing that Delaware's electorate wouldn't be as accommodating to a farther right Republican nominee as Alaskans appear to be:

Delaware ain't Alaska or Utah or Nevada. Alaska and Utah are about as Republican as you get, and Nevada isn't too far behind. The last time Delaware voted for a Republican presidential contender was 1988. Delaware is a territory where centrism is a key political qualifier for Republican aspirants to statewide office.  And Mike Castle has a record of proven success in Delaware.

If Mike Castle becomes the next United States Senator from Delaware he is going to get sworn in, serve a bit, then become a Democrat, resign, and let Beau Biden get an appointment.

It’s a done deal. The deal has been made already. I’m hearing this not just from Christine O’Donnell people, but party regulars in Delaware, some of whom support Castle.

Given the uptick in media attention this race is receiving, such a persistent, pesky report could be devastating to a prohibitive front-runner like Castle.  His camp insists it's untrue.  Reached today by Townhall.com, Castle's Congressional press secretary Kate Dickens categorically denied the rumor, calling it old, "made up" and "ridiculous."  Dickens said Rep. Castle will remain a Republican for the remainder of his career.

Jason McGuire, a top aide to O'Donnell, offered no official comment on the Red State report, saying he had no knowledge of its genesis or veracity.  McGuire emphasized, however, that Erickson is a "good reporter" with many sources, before again denying the story was being peddled by members of the O'Donnell campaign.  He said the campaign is focused on drawing distinctions between his candidate and the longtime Congressman—whom he branded as too liberal for Delaware’s primary voters.

"Mike Castle has often voted with Democrats in the past, and trying to clean up his record over the last few months heading into the primary doesn't change that he's been a RINO.  We're doing our best to keep him out of the US Senate," McGuire said.

During this session of Congress, Castle has voted against the Democrats' stimulus bill and health care plan, but broke with the GOP to join the Democrats on Cap and Trade, Financial Reform, and the DISCLOSE Act.