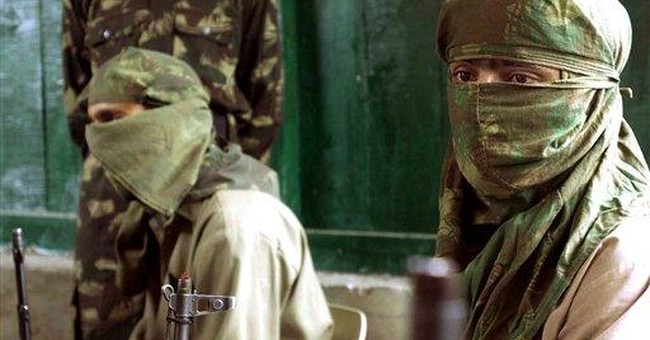 There’s never been a better time to be an enemy of the United States of America. Whether you’re a trained jihadist in US custody, a diminutive cult leader starving his own people while developing nukes, or part of a ruthless regime that murders dissidents in broad daylight, you can rest assured that the United States government is unlikely to act—or perhaps even speak—in a manner likely to disrupt your daily routine. While invoking “our values,” hailing the importance of American humility, and rejecting the “failed policies of the past,” the current administration is projecting a dangerous image to the world. This approach may be extolled as cautious pragmatism on the Beltway cocktail party circuit, but it’s most assuredly perceived as something entirely different by America’s current and emerging adversaries around the globe: Weakness.

Within days of assuming office, President Obama ostentatiously announced his intention to close the Guantanamo Bay detention facility within one year. That his administration had no workable plan to do so was beside the point; details were not about to obstruct the path to Hopenchange. Obama has since been thrashed by former Vice President Cheney in a public debate on this matter, and public opinion polls are trending decisively against his rushed and irresponsible decision.

Nevertheless, to avoid allowing a campaign promise to go by the wayside—while (quietly) adopting yet another staple of the previous administration's supposed failures—Obama has been working hard to relocate Gitmo detainees. He first floated the idea of releasing some of the supposedly least threatening blokes, Chinese Uighurs, onto US soil, where they’d be supported with welfare checks. His own party was so receptive to that lead balloon that they voted down funding to close the prison altogether. Obama then went knocking at the collective door of the same “international community” that had decried the facility’s very existence for years. Strangely, none of those nations were especially keen on welcoming radical Islamists onto their streets. After being rebuffed more than 100 times, the president finally identified two takers; the island paradises of Bermuda and Palau.

After training with Al Qaeda in Afghanistan, the Uighers were caught on the battlefield (the terrorist Miranda warning policy wasn’t in effect at the time—a grave injustice) and transferred to Guantanamo Bay, where they were afforded soccer, television, and pizza privileges. Their TV viewing got a bit dicey at times, as they reportedly destroyed a television set after being subjected to the obscene image of a woman’s bare arms. Aside from picayune details like that, they’re generally regarded as a pretty reasonable, well-adjusted bunch. They’re now arriving in exotic vacation destinations, along with millions of US tax dollars in aid—making themselves at home on pristine tropical islands. Islands, mind you, that most law-abiding, tax-paying, non-terrorist American citizens couldn’t afford to visit right now, given the current economy. Wage war against the West, and you too might end up catching rays in Bermuda! What a deal.

Meanwhile, the plump, aging woman who rules North Korea has been conspicuously misbehaving for months. The White House has been attempting to determine a productive way forward that—needless to say—bears no resemblance to those failed policies of the past. Remember, the era of US hubris, in which America “punishes” outlaw regimes by refusing to legitimize them, is over. So when Kim Jong Il’s military test fired a missile in April, the Pentagon was instructed not to deploy its most sophisticated missile-tracking technology to, well, track a missile launched illegally by an enemy regime. Why? As the Washington Times’ Bill Gertz reported at the time, officials were concerned that employing our superior technology simply to gather data on North Korea’s test would “provoke” the North Koreans.

The North Koreans, in turn, have exhibited their appreciation for the administration’s non-provocative, humble, “smart power” approach by conducting multiple additional proscribed weapons tests, and pledging to lob a ballistic missile toward US soil on July 4th. So it’s back to the ever-useful bargaining table, it would seem.

Speaking of July 4th, guess who’s coming to dinner at US embassies across the globe? Despite fomenting historic internal unrest by shamelessly rigging an election, denouncing and taunting the aforementioned international community, callously beating and slaying its own reform-minded citizens in the streets, and unilaterally declaring all nuclear negotiations permanently “closed,” envoys of the profoundly evil Iranian regime are invited to Independence Day barbeques hosted by top American diplomats. As State Department spokesman Ian Kelly blithely explained, “We have made a strategic decision to engage on a number of fronts with Iran.”

“Therefore,” he might has well have continued, “literally no level of Iranian barbarity will dissuade us from the undeniable wisdom of inviting to Iranian representatives to our parties, and we just can’t wait to start a dialogue.”

President Obama has insisted for days that America must not “meddle” in Iran’s business, despite demonstrators’ pleas for Western support, and in the face of much stronger statements from European leaders. In fairness, Obama has finally begun playing rhetorical catch-up with John McCain and Nicholas Sarkozy. Still, in his public statements, Iran’s unapologetic meddling in our business (funding terrorism, killing American soldiers in Iraq) goes unmentioned, as does his own administration’s overt meddling in Israel’s internal affairs.

A primary reason for Obama’s rhetorical reticence is his stubborn commitment to the campaign-promise-turned-inoperable-fantasy that he might actually manage to strike a historic accord with the regime in Tehran through direct, unconditional negotiations. In light of recent developments, this notion is more absurd than ever, yet Obama cannot let it go. Consequently, he’s hedging, taking pains to avoid inflaming the Ahmadinejad/Khameini unholy alliance by siding with pro-freedom demonstrators (which they’ve accused him of anyway) in the hopes of eventually inducing them into rational and honest negotiations.

Even if one fully endorses Obama’s no-meddling policy, how can the July 4th barbeque invitation decision possibly be justified? Not only is Obama assuring these theocrat thugs that he won’t lift a finger to stop their violent suppression of millions yearning for freedom, his State Department is taking this posture a step further by reaffirming Iranian emissaries’ friendly invitations to American-hosted parties. Parties held on a day that celebrates freedom from tyranny, no less. He’s not simply refraining from undue interference. He’s actually rewarding coercive despotism. It’s a shameful low point in this young administration’s history.

Enemies of America, this is your moment. This is your time. Considering joining the jihad? If captured, you’ll be read your rights, spared any and all harsh interrogation methods, and might even win an all-expenses-paid trip to a hot vacation spot. Hankering for some illicit WMDs? We’ll bend over backwards to avoid appearing provocative. Want to attend a fun summer BBQ? Just mercilessly quash a reformist uprising in your country, slaughter some unarmed young women, vow to wipe Israel off the face of the planet, and relentlessly pursue nuclear weapons. The State Department’s e-vite to DeathtoAmerica1979@gmail.com should be arriving any minute.