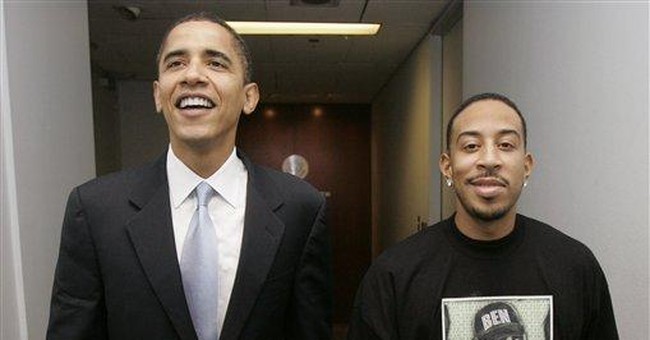 Barack Obama contemplates the latest offering from one of his favorite hip hop artists, Ludacris:

Thank goodness I found my iPod before leaving Berlin.  I should’ve known I left it in the hotel gym, considering how much time I spent down there.  Now let’s see what all these young staffers have been buzzing about.  Don’t let me down, Luda.  You never do.

Did he sign a new deal? I hadn’t heard.  I wonder how much he’s raking in these days. He’s gotta be in the highest tax bracket, right?

Yeah the best is here, the Bentley Coupe paint is dripping wet; it got sex appeal

Never should have hated

You never should have doubted him

Note to self: look up this word, “doubt.”

With a slot in the president’s iPod Obama shattered ‘em

Just wait for the whining: But he’s not president yet!!! Boo hoo. Hahahahaha.

That reminds me, I’ve got to call Tony Rezko back.  I thought people only get one call from prison—Man, he’s relentless.

Better yet put me in office, make me your vice president

Hmm…We did just bump Edwards off the shortlist.  Heh.

Hillary hated on you, so that bitch is irrelevant

So true! Truth to power, Luda!  Oh well, let’s get Bill Burton working on a statement expressing my “outrage” that he insulted Her Highness.  This party unity façade is such a pain.

Jesse talking slick and apologizing for what?

If you said it then you meant it how you want it have a gut!

Gotta give him some props for having the, um, stones to go after Jesse.

And all you other politicians trying to hate on my man

Rhyming ‘man’ with ‘man’? Really?  Note to self: finalize that speech on the importance of public education.

You can’t stop what’s bout to happen, we bout to make history

Come to think of if, how DOES one suggest/insist that he be added to Mt. Rushmore?

The threats ain’t fazing us, the nooses or the jokes

So get off your ass black people, it’s time to get out and vote

Now there’s a real get-out-the vote slogan.  Call Diddy and taunt him; this is way better than ‘Vote or die.’  Noose imagery—powerful stuff.  Too bad he didn’t mention my funny name while he was at it.

Oh no--Michelle must have gotten to him.  It’s time to tell her I’m putting my foot down on this one.  We’re simply not painting that house, and I’m not caving to her ‘downright mean’ line this time.

McCain don’t belong in any chair unless he’s paralyzed

LOL! He is SO OLD.  Still, have Bill condemn this in the statement.

Yeah I said it, cause Bush is mentally handicapped

He should be absolutely ashamed of that line.  ‘Candy wrap’ was the best he could do?

Cause what you talking I hear nothing even relevant

And you the worst of all 43 presidents

Get out and vote or the end will be near

The world is ready for change cause Obama is here!

Well, this is going to alienate white working class voters over 50, so we’d better start the political distancing process.  I’m getting pretty good at this!  Have Axelrod fire up the bus and toss Ludacris underneath until things blow over.  Tell him no hard feelings, and that he’ll be welcome to perform at the inauguration.  Let’s see…words that must be included in the statement: “Misogyny,” “degrading,” and “outrageously offensive.”  Let’s reserve “this isn’t the Ludacris I once knew” just in case things get really ugly.  Oh, and definitely include some indignant words about not exposing my daughters to this stuff, and stress moral values.  That’ll play well in Bitter America.

What’s next on the playlist?  Oooh, “Money maker.”  I love this song.