The Opportunistic Rise of Barack Obama 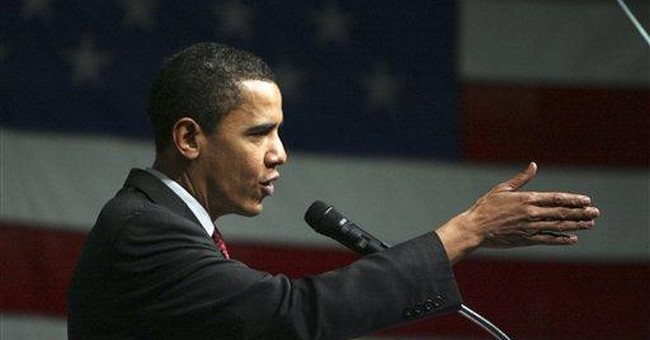 By now it's a familiar tale: On July 27, 2004, Barack Obama strode to the podium at the Democratic National Convention and captivated the nation with a soaring and memorable keynote address entitled "The Audacity of Hope." The speech marked America's first encounter with a rising political star. By the time Obama took the stage in Boston, he was already a shoo-in to become the next United States Senator from Illinois; he enjoyed a massive lead in the polls back home, where the state Republican Party was in total disarray and his carpet-bagging opponent seemed to specialize in alienating voters. Since that summer night more than three years ago, Obama has rocketed into the political stratosphere and now faces the possibility—if not the probability—of becoming his party's standard-bearer in the 2008 election.

Several questions still linger. How did Barack Obama rise from relative obscurity to his current level of prominence? How many Americans have heard of Alice Palmer, Blair Hull, or Jack Ryan? These names may hold no significance to the legions who now chant "yes we can," but they are names that Barack Obama should remember well. The mainstream press, which affords Obama nearly unanimous glowing coverage, has repeatedly failed to report a reality that doesn't quite fit the Obama-as-Messiah narrative. Namely, that this self-stylized agent of hope and change is a political opportunist extraordinaire. Barack Obama's dizzying ascendancy to political celebrity has been marked by less-than-inspirational bare-knuckle politics, an unremarkable legislative career, and a slew of lurid scandals that conveniently sunk formidable opponents.

Obama's first big break came in 1995 when Democratic Congressman Mel Reynolds resigned from office amid allegations of a sexual relationship with an underage girl. As state officials convened a special election, a venerable Chicago politician and civil rights leader named Alice Palmer chose to vacate her State Senate seat to pursue the open Congressional slot. After she was defeated handily, Palmer returned to run for re-election, only to discover that her hand picked successor was unwilling to relinquish his spot on the ballot. Though a series of legal challenges, Barack Obama strong-armed Palmer—and several other Democratic challengers—off the ballot, clearing a path to victory by destroying all potential competition.

During his unexceptional tenure in Springfield, Obama managed to rack up 129 "present" votes, including numerous noncommittal tallies on controversial issues such as abortion and gun rights. He also developed a curious, albeit rare, pattern of registering incorrect votes—including an accidental "no" vote on a hotly contested child welfare bill. When confronted with his mistaken vote, Obama asserted that he was "unaware" that he had voted the way he had, and asked that the record reflect that he had "intended" to vote the other way. Similar cases of supposed vote-casting confusion afflicted Obama on five additional occasions.

As the 2004 general election approached, Obama began to eye greener pastures. He decided to run for US Senate, positioning himself as an antiwar candidate. His longshot effort attracted throngs of college students, yet Obama gained little traction against the party's frontrunner, millionaire Blair Hull. But a bombshell scandal resurrected Obama's prospects. In amazingly short order, Hull experienced what the Chicago Tribune described as "the most inglorious campaign implosion in Illinois political history." Late in the primary race, unsealed divorce papers revealed allegations that Hull had verbally and physically abused his ex-wife. The Hull campaign tanked, and Team Obama celebrated. The nomination was theirs.

Illinois political observers then turned their attention to what promised to be a fiercely competitive general election race between Obama and GOP frontrunner Jack Ryan, a well-funded, charismatic businessman. Once again, however, scandal lurked in sealed divorce papers. Over the objections of both Ryan and his ex-wife—actress Jeri Ryan—the damning documents were made public, and the resulting headlines were salacious: Ryan had allegedly pressured his wife to visit sex clubs. Like Reynolds and Hull before him, Ryan dropped out of public life in disgrace, with Obama happily playing the role of beneficiary.

With Jack Ryan out of the picture, a desperate Republican Party trotted out a polarizing non-Illinoisan to face Obama in the fall. Alan Keyes' disastrous Senate campaign is perhaps best remembered for Keyes' spate of vicious, counterproductive attacks launched against Obama, including the assertion that Jesus Christ himself would have voted against Obama. The rout was on.

DNC organizers, anticipating Obama's assured victory and recognizing his potential widespread appeal, wisely offered him a coveted primetime speaking slot during the summer convention. Although the Beantown gathering was designed to be a political infomercial for the ill-fated Kerry/Edwards ticket, Obama stole the show with a speech that inspired millions and, more-importantly, transformed him into an instant media darling. Obama had seized his moment and smashed a rhetorical homerun. Less than half a Senate term later, he announced his Presidential bid.

Now only two figures impede Obama's path to the presidency. Unless Hillary Clinton can revitalize her sputtering campaign, or John McCain can defy the political odds and prevail in a tough electoral climate for Republicans, Barack Obama will become our next Commander-In-Chief. Unlike most seasoned politicians, who earn presidential nominations through many years of legislative, executive, or military accomplishments, Obama has exploited his rock-star status to skip to the front of the line. With many of his supporters apparently distracted by his powerful persona and vague, uplifting message, few people seem to notice, or care, that Obama's qualifications to be president are more than a bit thin. Americans would be well-served to shake themselves from the "change" trance long enough to examine Senator Obama's relatively meager record.