Grant Anderson
|
Posted: Dec 15, 2020 12:01 AM
Share   Tweet
The opinions expressed by columnists are their own and do not necessarily represent the views of Townhall.com. 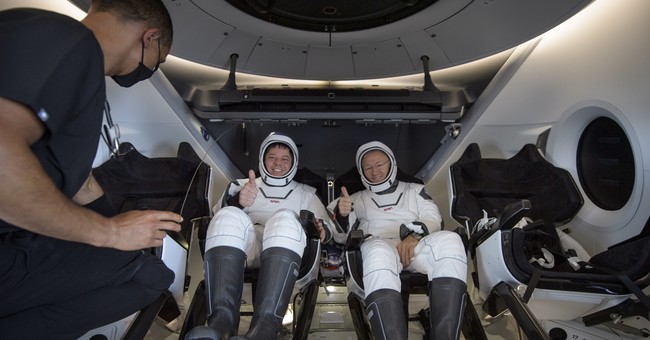 Days after the election on November 3rd, former Vice President Joe Biden gave a press conference to the nation in which he urged America to embrace unity moving forward. “With the campaign over …it’s time for America to unite – and heal.” In a country fraying at the seams, the former vice president’s appeal for hope in a time of distrust, cynicism, and sharp policy differences received mixed reviews. Optimism is low, and a pall lies uneasily across the nation. However, in accord with his plea, there are areas for agreement – like space.

Biden’s words might be appreciated as a spoken tonic for what ails us. Beyond politics, the idea of unity in purpose will require concrete actions, real missions, and clear national priorities to patch an increasingly fractured and tribal culture. Fortunately, America has a history and model with which to inspire and guide this effort forward: our national space program.

When the Apollo XI mission put three brave Americans on the moon in the summer of 1969, Americans came together to appreciate one of the most awe-inspiring achievements in the history of humankind.

For America, and for much of the world, the moon landing occurred at the right time. It showed allies and adversaries – and reminded us – what America was capable of when unified. Meaningful, outsized, ambitious, and common objectives, when achieved are inspiring. We saw American greatness at a time when it was sorely needed. That achievement recalibrated our compass and altered our path toward the future.

Parallels between now and then are notable, not entirely superficial. Half a century after Apollo XI, we are again mired in national tension, social upheaval, and nagging doubt – losing sight of who we really are as a people and country, caught in politically divisive sword-crossing.

At the same time, we are again engaged in a great strategic competition with foreign competitors, like China. These competitors – not unlike Soviet Russia in the 1960s – pose a growing challenge to our position and to that of freedom, democracy and human dignity. As in 1969, space is important to America, our prestige, diplomacy, the economy, and perhaps most centrally, our national security.

For these reasons, prioritizing human space exploration is – for reasons obvious and historical, elusive, and emerging – critical to our future.  Continuing to the moon and on to Mars with programs like Artemis – with realistic goals, committed leadership, and defined vision – can unify the country, reminding us of greatness within, stimulating hope and foster ambition in future generations.

Prioritizing human space exploration, for the first time in 50 years, would have immediate, much-needed, economic impact beyond mere job creation. It would generate a range of technical and non-technical advances, innovations from engineering and medicine to propulsion and life sciences, physics and materials, with endless cross applications to life on Earth.

Part of the 1960’s advance into space, unexpectedly, went beyond the moon race itself, beyond beating the Soviets, national pride, security and science; the committed national effort created simultaneous and follow-on economic effects, already felt by millions in the 1960s. The moon effort triggered an avalanche of life-changing events, not only millions of new jobs but new industries and professions, not only domestic material improvements but radiating enthusiasm for them.

Maintaining our focus on new space goals would also jumpstart lagging education indicators, especially in science, technology, engineering, and math. Inspiration followed by real commitment, in the form of sustained actions, can powerfully affect the future. And affect the minds of future leaders of every field that are just now in the throes of the journey from childhood to adulthood.

This is the time – at the change of an administration, at a rocky time economically, with American education, national pride, and security all at risk – to rewrite the script and give running room for firmly stated held goals, budgets and resolve.

This is the time – for two simple reasons. First, human space exploration’s moment has returned, cycling through our conscience like a long-lost friend or periodic comet. Only this time, we must grab hold and not let go – because others, from China and Russia to India and Middle Eastern players are seeking their own handhold. America needs to lead here.

Second, taking us back in time, this is a moment when – as in the 1960s – the need for unity is especially high, and it is something that Americans increasingly yearn for.  With forces of disharmony, disunity, and distrust afoot, and foreign adversaries fanning those embers, a vital chance exists to recapture our unity if we will embrace our imagination, ambition, and historic strength in human space exploration.

History, as they say, is made by inches – as well as by daring, with unified force, to go forward. As in 1962, when John F. Kennedy set us on a course for the moon, culminating in those extraordinary years of lunar landings, we are ready. From the perspective of someone involved in supporting these endeavors, we believe in the future and are ready to embrace it again.

And while great achievement requires the power of unity – it will also produce great unity in kind.