Gil Gutknecht
|
Posted: Mar 17, 2019 12:01 AM
Share   Tweet
The opinions expressed by columnists are their own and do not necessarily represent the views of Townhall.com. 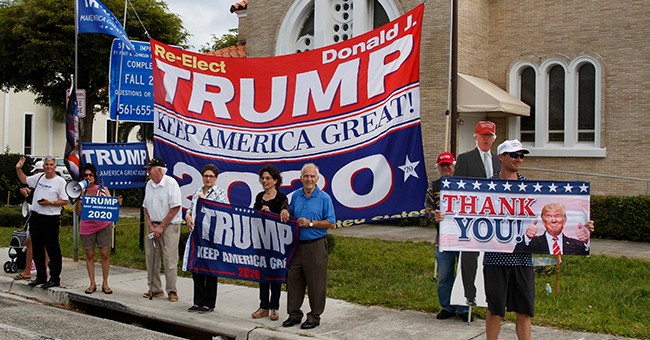 Watching the Jeep Super Bowl commercial several times, it suddenly became clear, President Trump is on his way to a 45 state landslide.

You are way out over your skis, some will say. Get this guy some smelling salts!

What about the nonstop investigations? What about Stormy Daniels and Robert Mueller? What about the angry Left and their apologists in the national media? What about Mr. Trump’s prickly, in your face persona? What about the feckless Congressional Republicans and the never Trumpers? What if the trade talks with the Communist Chinese come up empty?

Watching the Jeep ad, it became crystal clear. None of that really matters. It is just noise.

It’s as simple as that.

The marketing and advertising guys at Jeep understand that here in the land of the free, there is still a majority of us who are patriots. Especially among prospective Jeep buyers. Ask yourself this, how many people share the same distain for our country that most leading Democrats do?

Democrats reinforce this every day.

The Left wants to destroy everything most of us believe in. It wasn’t a slip of the tongue when New York Governor Cuomo said that he didn’t think America was that great. Like the militant Taliban, they want to tear down the monuments and memorials that a handful of radicals think offensive. To them, our founding was flawed. Our founders were racists slave owners. Christopher Columbus was a criminal. American history is pockmarked with one abuse after another.

Democrats somehow have convinced themselves that most of the problems in the world can be blamed on the United States. Others are poor because we are rich. To them our wealth has nothing to do with free people interacting in a free market. No, it is because we have exploited and stolen from others. They conveniently ignore the enormous price Americans have paid to plant the flag of Liberty around the globe.

They are now willing to openly advance Socialism as the only cure for the inequities of Capitalism. Never mind the overwhelming evidence that raw Socialism goes against human nature and it has never worked…anywhere.

They believe traditional morality is passé. Marriage is outdated. People of faith are only slightly higher than Neanderthals. The Left worships humanism, diversity, the environment and the latest class of victims. Their only sacrament seems to be the sacrificing of the unborn, slaughtering them even after babies are born alive.

The fight over the border wall crystallizes this great divide. The Left has so much contempt for this country that they do not believe we have the right to defend our borders. With the help of fellow-travelers in the media, they torture our language. They turn the arguments on their head convincing some that those who believe in the rule of law and that citizenship remain a precious thing are just mean-spirited. Anyone who disagrees must be shamed and demeaned. Even expressing the view that Western Civilization is worth defending is now branded as hate speech.

Ordinary Americans, the ones who defend this nation and get a little misty watching the Jeep commercial, have had more than enough of the self-righteous, Blame America First crowd. The vitriol that Democrats dispense daily for our country, its values and its history cannot be explained away. Voters see it clearly. They know that the anti-America crowd cannot relate to them, let alone understand how they feel. Donald Trump clearly loves this country and he does relate to them.

Distain for America may be just the ticket to move the Democrat base. Democrats don’t see the oncoming train, but they have punched their ticket to electoral disaster in the general election.

You can drive that Jeep to the bank.

Gil Gutknecht served six terms in the U.S. House from Minnesota. He writes on political and healthcare issues.