Gil Gutknecht
|
Posted: Jan 27, 2019 12:01 AM
Share   Tweet
The opinions expressed by columnists are their own and do not necessarily represent the views of Townhall.com. 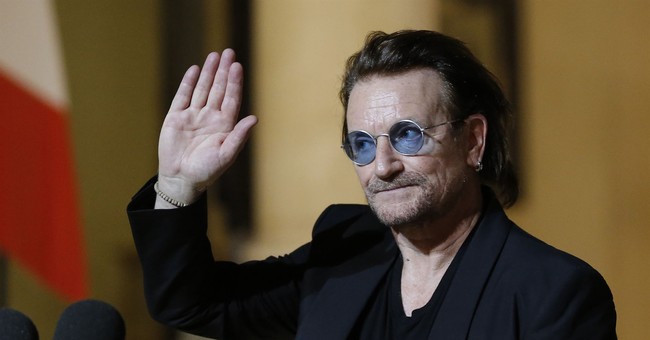 At the World Economic Forum in Davos, Switzerland this week, Rock Star Bono said, “Capitalism is not immoral — it’s amoral. It requires our instruction. Capitalism has taken more people out of poverty than any other ‘ism,’" While he praised the system, he also cautioned about it needing to be managed. “It is a wild beast that, if not tamed, can chew up a lot of people along the way,” he added.

On both points, he is exactly right. He has long advocated free market capitalism as the best way to bring more human beings, especially in Africa, out of grinding poverty.

This view was reinforced recently by HumanProgress.Org. They said,“When Ronald Reagan became President in 1981, 44.3 percent of the world lived in extreme poverty (i.e., less the $1.90 per person per day.) Last year, the number living in extreme poverty was 9.6 percent. That’s a decline of 78 percent.”

How did that happen? In a word, Capitalism.

President Reagan understood that government managed economies could never compete with free market Capitalism. He boldly predicted the ultimate collapse of the Soviet system. It did. The Chinese were paying attention. Fearing the same plight, they embraced dramatic reforms, allowing more market principles to guide the allocation of capital. It can be more accurately described as crony Capitalism and has been fueled largely by foolish American trade policy. Yet, it helped lift hundreds of millions of Chinese peasants out of extreme poverty.

We see in Venezuela one more example of the long record of the failure of Socialism. Promising more economic “fairness”, the socialist leaders managed to turn one of the wealthiest countries in Latin America into one of the poorest. Proving once again, it doesn’t work!

So why is Socialism making a political comeback here? There are two primary reasons. First, the proponents on the Left (and their fellow travelers in the media) have never let facts or history get in the way of their opinions. They have no interest in learning or sharing the truth about Venezuela. It doesn’t fit the narrative. Second, too many of us on the right have turned a blind eye to the abuses that happen when market power combines with political power to allow certain companies or individuals to defeat competitive regulators.

Teddy Roosevelt understood that left to their own devices, Capitalists would abuse their market power creating monopolies that would then abuse American consumers. He pushed back against the trusts. He believed in Capitalism. Teddy also believed that governments needed to make sure that there was adequate competition.

Over the last twenty years we have witnessed merger after merger. From the airlines to pharmaceuticals to banking we’ve seen the big get bigger and the little guys get run over. After the merger, too often good people get laid off, prices go up and service is reduced. Our Commerce Department and DOJ act as if our antitrust laws have expired. These mega mergers are almost never challenged. When they are, a couple of minor accommodations are made and the deal goes through. Top managers get huge payouts and we all pay.

Karl Marx predicted that Capitalism would ultimately destroy itself. Without rules that enforce free and open competition, Marx could be right. We need look no further than how the pharmaceutical industry has used its market power to acquire more political power to impose its will upon sick Americans. Or how two large office supply Goliaths used their market power to drive thousands of Mom and Pop shops out of business. Only to then merge into one office supply colossus. Too many of our fellow travelers simply shrug and say, “That’s Capitalism.”

That may be Capitalism. However, it is hard to defend. It is not free market. Furthermore, the abuses leave conservatives defending the indefensible. And it gives a platform to those who despise free market capitalism and want to impose Venezuela style Socialism on Americans.

If we are going to continue to advance the enormous benefits of free market capitalism, we need to be honest. Where there are abuses, we need to speak out. Whether they be drug companies, social media giants or big banks we need to insist that they are indeed competing in real, not rigged markets. Where they are not, where they are abusing their power, government must put on striped shirts and play the referee. We cannot allow the Marx prediction to become reality.

Bono has it right. Will we be wise enough to heed his advice?

Gil Gutknecht served six terms each in the Minnesota and the U.S. House of Representatives. He writes about healthcare and political issues of the day.