Gil Gutknecht
|
Posted: Dec 30, 2018 12:01 AM
Share   Tweet
The opinions expressed by columnists are their own and do not necessarily represent the views of Townhall.com. 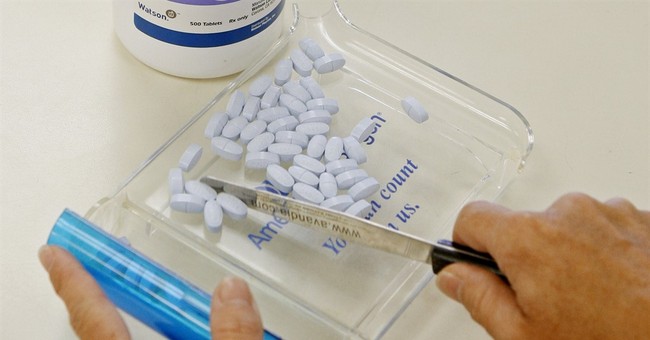 Lost in the daily deluge of the media’s nonstop attacks on President Trump were a couple of stories that may have huge consequences. They both concern the pricing of prescription drugs. We Americans pay more for prescription drugs than anyone else in the industrialized world. Not a little bit more. A lot more!

Recently a local post-menopausal woman received test results that showed she was at very high risk for osteoporosis. Her numbers were such that her Doctor

Here are some interesting things about pricing. Prolia (Denosumab) is manufactured by pharmaceutical giant Amgen. According to GoodRx, a 60 mg/ml syringe carries an average cash price here in the U.S. of $1724.34. The average GoodRx coupon price is $1188.62. A nice savings.

But according to the Alberta College of Family Physicians, the price for that same Prolia syringe is only $210 in Canada. In other words, more than five times more here on this side of the border. This is just one drug. According to Pew Research, our total drug spend will be about $530 Billion in 2018. If we are spending 40-400% more than our industrialized competitors for branded drugs, you begin to see a major reason why our healthcare costs are through the roof.

We will deal with exactly how Canadians get such favorable pricing in another piece. Hint, they do their homework.

Whether the insurance company or the government pays all or any part of America’s annual drug costs matters not. We all pay. Too many of us concern ourselves only with the co-pay that we individually are forced to pay.

The cozy relationship between the rapacious drug industry and our government ran into the Great Disruptor in 2016. The Orange Agitator said that Americans were being overcharged “big time” for drugs and things were going to change. Big Pharma thought they had dodged the bullet when they managed to get some of their friends appointed to key positions. The former CEO of drug giant Eli Lilly was named Secretary of HHS. During his tenure at Lilly, he managed to triple the price of Insulin. So, the PhARMA lobbyists believing the storm had passed, popped the corks on the expensive champagne.

Whatever his critics may say of him, Donald Trump can be quite persistent. Especially when it comes to his campaign promises. Perhaps the Secretary noticed that his boss has a pattern of replacing people who can’t (or won’t) get his agenda implemented. So, Secretary Azar developed a plan to bring more market forces to bear on drug prices. Much of his plan is typical lofty bureaucratic nonsense. But, one point deserves special attention and a large attaboy.

He called for using “reference prices” for prescription drugs.

This is a very big deal. It has the potential of putting valuable information in the hands of insurers, regulators and consumers. The PhARMA defenders often talk about our “free market” for healthcare and pharmaceuticals. But free markets require price transparency and real competition. No one can argue with a straight face that either of these exist in the American Rx drug market today. American consumers are a captive market. The drug companies have used government guaranteed exclusivity and a very opaque pricing system to keep real price transparency from ever becoming a reality.

Reference pricing means that our government will begin to look at the prices these drug companies charge in other industrialized countries. They presumably will share that information with us. It blows a hole in the wall that the drug companies have created.

The second major development occurred earlier this month. The Centers for Medicare and Medicaid Services proposed a rule that would require the posting of list prices of prescription drugs in television advertising. Drug companies spent over $5 Billion on TV ads this year. They studiously avoid any discussion of their prices. Americans will be surprised when they learn that those tablets which may cure their skin rash (while potentially leading to severe constipation or even death) carry a list price of over $3,000 a month. Or that the Hep C medication is over $87,000.

The pharmaceutical industry will be fighting these two proposals with everything they have. They understand the consequences. Information is power. A well informed citizenry will demand serious changes. Big Pharma is already funneling big advertising dollars through groups like Citizens for Tax Reform. They are running ads warning of the dire consequences of price transparency.

But in the end, PhARMA will lose. Price transparency will prevail. Drug prices in the United States will be forced down. The drug companies’ ROI may start to look more like the rest of the S&P. And one more campaign promise made by the populist Agent of Change in the Oval Office will be brought to fruition. A big win for President Trump. An even bigger win for our country.