A Birthright? Maybe Not. 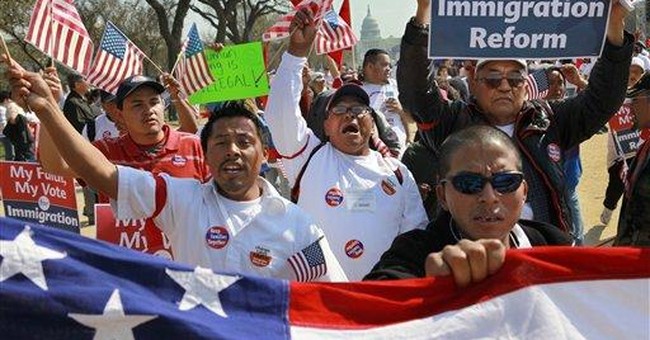 WASHINGTON -- A simple reform would drain some scalding steam from immigration arguments that may soon again be at a roiling boil. It would bring the interpretation of the 14th Amendment into conformity with what the authors of its text intended, and with common sense, thereby removing an incentive for illegal immigration.

To end the practice of "birthright citizenship," all that is required is to correct the misinterpretation of that amendment's first sentence: "All persons born or naturalized in the United States, and subject to the jurisdiction thereof, are citizens of the United States and of the state wherein they reside." From these words has flowed the practice of conferring citizenship on children born here to illegal immigrants.

A parent from a poor country, writes professor Lino Graglia of the University of Texas law school, "can hardly do more for a child than make him or her an American citizen, entitled to all the advantages of the American welfare state." Therefore, "It is difficult to imagine a more irrational and self-defeating legal system than one which makes unauthorized entry into this country a criminal offense and simultaneously provides perhaps the greatest possible inducement to illegal entry."

Writing in the Texas Review of Law and Politics, Graglia says this irrationality is rooted in a misunderstanding of the phrase "subject to the jurisdiction thereof." What was this intended or understood to mean by those who wrote it in 1866 and ratified it in 1868? The authors and ratifiers could not have intended birthright citizenship for illegal immigrants because in 1868 there were and never had been any illegal immigrants because no law ever had restricted immigration.

If those who wrote and ratified the 14th Amendment had imagined laws restricting immigration -- and had anticipated huge waves of illegal immigration -- is it reasonable to presume they would have wanted to provide the reward of citizenship to the children of the violators of those laws? Surely not.

The Civil Rights Act of 1866 begins with language from which the 14th Amendment's Citizenship Clause is derived: "All persons born in the United States, and not subject to any foreign power, excluding Indians not taxed, are hereby declared to be citizens of the United States." (Emphasis added.) The explicit exclusion of Indians from birthright citizenship was not repeated in the 14th Amendment because it was considered unnecessary. Although Indians were at least partially subject to U.S. jurisdiction, they owed allegiance to their tribes, not the United States. This reasoning -- divided allegiance -- applies equally to exclude the children of resident aliens, legal as well as illegal, from birthright citizenship. Indeed, today's regulations issued by the departments of Homeland Security and Justice stipulate:

Sen. Lyman Trumbull of Illinois was, Graglia writes, one of two "principal authors of the citizenship clauses in 1866 act and the 14th Amendment." He said that "subject to the jurisdiction of the United States" meant subject to its "complete" jurisdiction, meaning "not owing allegiance to anybody else." Hence children whose Indian parents had tribal allegiances were excluded from birthright citizenship.

Appropriately, in 1884 the Supreme Court held that children born to Indian parents were not born "subject to" U.S. jurisdiction because, among other reasons, the person so born could not change his status by his "own will without the action or assent of the United States." And "no one can become a citizen of a nation without its consent." Graglia says this decision "seemed to establish" that U.S. citizenship is "a consensual relation, requiring the consent of the United States." So: "This would clearly settle the question of birthright citizenship for children of illegal aliens. There cannot be a more total or forceful denial of consent to a person's citizenship than to make the source of that person's presence in the nation illegal."

Congress has heard testimony estimating that more than two-thirds of all births in Los Angeles public hospitals, and more than half of all births in that city, and nearly 10 percent of all births in the nation in recent years, have been to illegal immigrant mothers. Graglia seems to establish that there is no constitutional impediment to Congress ending the granting of birthright citizenship to persons whose presence here is "not only without the government's consent but in violation of its law."