Out of Catastrophe, Renewal 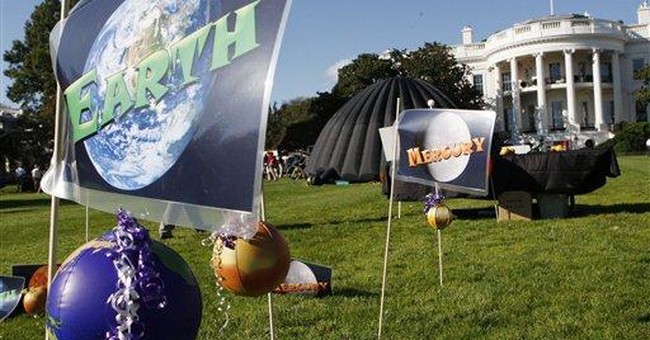 WASHINGTON -- Already 99.9 (and about 58 more 9s) percent of the universe -- it is expanding lickety-split -- is beyond Earth's atmosphere. Into what is it expanding? Hard to say. We can say there is lots of stuff in space: Hold up a penny at arm's length and you block from your field of vision three galaxies -- billions of stars and other things -- 350 million light-years away, which is right next door in our wee corner of the universe.

But there is much more space than there is stuff in space: If there were only three bees in America, the air would be more crowded with bees than space is with stars. But there is much stuff besides stars whizzing around, and 65 million years ago -- the day before yesterday on the calendar of the 14 billion-year-old universe -- big bits of stuff entered Earth's atmosphere traveling faster than a high-caliber rifle bullet.

One result was a 16,000-foot mountain, Bombay High, that has never been climbed because it is underwater off India's west coast. Another result was the "worldwide collapse of the climate and ecosystems" leading to the mass extinctions of the dinosaurs and two-thirds of marine animals, and the destruction of much of the planet's flora. So surmises Sankar Chatterjee of Texas Tech University.

"Catastrophism," the study of calamitous episodes in Earth's geological history, has long postulated a cosmic collision that resulted in sudden extinctions. There are "iridium anomalies" -- concentrations of that material that suggest extraterrestrial origins. There also is 10,000 times more carbon than normal in the geologic time zone 65 million years ago, a worldwide layer of soot from fires kindled by the impact of a gigantic asteroid.

A consensus developed that it created Mexico's 110-mile-wide Chicxulub crater. But Chatterjee says there is a crater, Shiva, more than 300 miles wide, off western India, probably formed by an asteroid or a part of one, 25 miles in diameter.

He thinks it possible that Shiva and Chicxulub were created by portions of different asteroids that fragmented when they hit the atmosphere. The energy from the fragment that produced Chicxulub is estimated to have been equivalent to the explosion of 100 trillion tons of TNT -- 10,000 times the explosive potential of the world's arsenal of nuclear weapons. The much bigger fragment that created Shiva may have shoved India north. India was then an island moving three to five centimeters a year. Then came what has been a mystery to students of plate tectonics -- the surge of the Indian plate to the astonishing rate of 15 to 20 centimeters a year.

Dinosaurs, who were thriving in India, had lived a thousand times longer than humans have yet lived. Then they and more than 75 percent of Earth's plant and animal species died. Perhaps the two collisions, combined with a lot of volcanic activity in that era, some of it perhaps caused by the collisions, tossed up enough dust to block sunlight, creating perpetual night, and acid rain, impeding photosynthesis and causing the starvation of many creatures. Or perhaps by screening sunlight, the dust caused a glacial episode.

Or perhaps dust and water vapor had a "greenhouse effect," holding in heat and cooking much life out of Earth. The discovery, two decades ago, of a bed of dinosaur fossils on Alaska's North Slope suggests that temperatures may have been warmer long ago, before there were human beings to blame for that.

Before Darwin, many people believed that no species could become extinct because this would mean there had been an imperfection in God's original handiwork. Yet 104 years before publication of "On the Origin of Species," the Lisbon earthquake of 1755 had caused some people to doubt that God has ordained a benevolently ordered universe. Nevertheless, in 1787 other people -- Americans call them the Founding Fathers -- who were influenced by Newtonian physics and the deist idea of God as cosmic clockmaker, devised a constitutional system of separated powers, checking and balancing one another, mimicking what they considered our solar system's clocklike mechanics.

Today, we know there is a lot of play in the joints of the Constitution, and that every 40 million years or so asteroids of more than half a mile in diameter strike Earth. Yet the Constitution still constitutes, and the fact that flora and fauna have survived Earth's episodes of extreme violence testifies to the extraordinary imperative of life.