Rome's Call: "Come on Over" 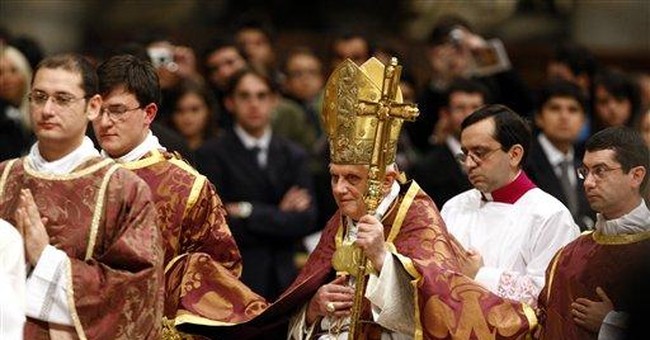 WASHINGTON -- Late in life, the mother of the Rev. Thomas Reese, S.J., began attending mass at a Southern California church, the congregation of which soon became Spanish-speaking. Services were conducted entirely in that language, which she could not understand, yet she happily continued attending. When her son asked why, she replied: "It is just like the Latin Mass, I don't understand a word of it. It is even better, I don't understand the homily."

We have all listened to a speaker and wished: If only he were incomprehensible. As G.K. Chesterton said of Times Square, it would be beautiful if you could not read.

Mrs. Reese's son, now 64 and a senior fellow at a religious-issues think tank at Georgetown University, was raised experiencing the liturgy in Latin. He entered seminary in 1962, the year the Second Vatican Council convened. By the time Reese was ordained, the council had essentially proscribed the Latin Mass.

Having seen much change -- and much resistance to it -- Reese is relaxed about 2009's most intriguing development in Christianity, the Vatican's enticement of disaffected Anglicans. Rome is saying to individuals, and perhaps to entire parishes and even dioceses: "Come on over." It is trolling with rules, recently written, that will enable Anglicans-become-Catholics to retain some of their liturgy. The church will accept some already married priests, and perhaps married seminarians, but not bishops.

The Vatican says it is not raiding but merely answers to Anglican knocks on its door. Combined, however, with Pope Benedict XVI's having appealed to dissident conservative Catholics by removing most restrictions on celebrating the traditional Latin Mass, the courtship of Anglicans looks like an aggressive -- although not improperly so -- attempt to consolidate an expanded Catholicism.

There are 1.1 billion Catholics. Anglicanism is the third-largest Christian communion (Eastern Orthodox is second) but has just 80 million adherents, of whom only 2.3 million are Americans, and a mere 16,000 of them -- those in New Hampshire -- have helped to precipitate the Vatican's move. The election of a gay Episcopalian as New Hampshire's bishop was one brick over a load for conservatives, who think the Episcopal Church has become a Moveon.org at prayer -- liberal politics in vestments.

Half of all Anglicans are in sub-Saharan Africa. There and in Latin America, Anglicanism is culturally conservative, reducing conservatives' reasons for embracing Catholicism.

Reese disputes the assumption that the Vatican is accelerating a sorting out that will produce a more conservative Catholic Church. Some Catholics, he notes, will experience the fact, and many more will contemplate the idea, of married priests administering the sacraments. This, Reese thinks, may remind Catholics that for its first thousand or so years, the church had married priests and bishops. A celibate priesthood, he says, is a product of church law, which can be changed.

Reese thinks that would strengthen the church in the competition for souls. In parts of Latin America, he says, Catholic priests are so scarce that many villages see one only a few times a year. Evangelical Protestants, however, come to a village, identify a respected man, married or not, train him, build a church and the village becomes Protestant.

Reese, slight and bespectacled, laughs easily and infectiously but once caused a future pope to mutter, as Henry II did about Thomas a Beckett, "Who will rid me of this turbulent priest?" Reese was editor of the Jesuit magazine America until 2005, when he was reprimanded by Cardinal Joseph Ratzinger, whose defense of orthodoxy earned him the sobriquet "God's Rottweiler." Then he became Benedict XVI. Reese's offense, conservative Catholics said, was latitudinarianism -- lack of stringency regarding disputes about faith and morals.

But with the Latin Mass restored and Anglicans being courted with liturgical concessions, will the Catholic Church have three liturgies? Who are the latitudinarians now?

Today, the most contentious issues between liberal and conservative Anglicans concern gay and women priests. But many of the conservative Anglicans to whom Rome is beckoning are apt to be especially serious about the theological differences with Rome that have defined Anglicanism for almost five centuries, including the nature of the sacraments, veneration of Mary, and papal infallibility.

Benedict XVI's 2010 visit to Britain, where the Archbishop of Canterbury cannot be amused by Vatican poaching, may be awkward, but the most disconcerting consequences of what the Vatican began in 2009 might eventually be felt by conservative keepers of Catholic tradition. Popes have mighty powers, but the law of unintended consequences contains no exemptions for the merely infallible.